We Saw the F1 Track

-
We arrived in Monaco around 11:30AM (about a 20 minute train ride from Nice) and immediately began walking in the direction of the Exotic Garden. I had been to the garden on my last trip, and thought that it would be fun to see again with Dilyara. 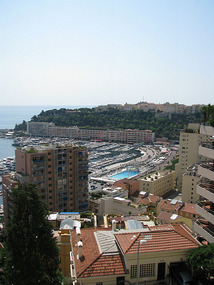 Monaco
. We were lucky, and there was also a tourist information center in front of the gardens. We finally retrieved a free map which helped guide us through the remainder of our visit. The entry fee for the gardens was 3.80 per student.

The gardens were just as I remembered. They are nice to see, especially since it is located on the side of a large hill/mountain of mountain. I personally think that some of the best views of the city can be seen from these gardens. After examining the interesting plant specimens, we went into a guided tour of a cave they also have in the gardens. The cave was accidentally discovered while creating the gardens, and it was neat to see. It was also the first cave that Dilyara had ever been inside! It had the stalagmites/stalagtites and everything.

We left the gardens around 2PM. Then we walked down the mountainside into the east side of the city. We specifically went to this area, because there was a McDonalds (free WiFi). We researched which trains we would take to return to Nice, then continued on our way to a nearby Supermarket. We grabbed some food to eat and some waters, then began our hike up to the Palace, Church, and Oceanographic, situated on a small peninsula like outcropping of land from monaco (and of course super high mountain/hill).

At the top of the hill, we viewed the palace and Oceanographic from the outside. We were able to see the church on the inside. We also took pictures of the surrounding landscape and the overhead view of the city of Monaco. We then took an elevator to the bottom of the hill and walked toward the city from the east side.

Entering the side of the city, we saw a statue car and driver, so Dilyara had to have a picture in the car. We took it a continued on our way along the port side of the city. This took us directly by the start of the Formula 1 Racetrack. We took Dilyara's picture at the start line and then continued walking along the water toward the casino. We passed a number of expensive boats. One of the smaller boats was selling for around 30 million dollars.... We didn't make any purchases this time... maybe next time ;).

We made the walk over to the casino took some pictures and then walked North toward the train station.

We took the train around 5 PM back to Nice.