Why Can't I Find Water?

-
The title of today's post came from our many failed searchings of reasonably costing water. It was Sunday, so everything (almost) was closed. Not fun.

We began the day waking up around 8AM 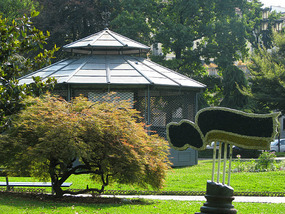 Torino
. We had a plan to grab a bus at 9:23 to the Torino Porta Nuova Station. Everything worked out perfectly and we were at the bus stop about 5 minutes the bus arrived.

The bus came and we got on to pay. That is when a great day started... the bus driver told us that we can't buy tickets on the bus. We would have to buy them elsewhere. This meant we had to get off the bus. We immediately began to brainstorm solutions.

We decided that we needed to look for the metro. Usually they sell tickets through a machine, and then we would not need to look for a random store to purchase a bus ticket. And we did not know when the next bus was coming (maybe 30 minutes or an hour).

We approached a man and asked it he spoke english. Of Course, he didn't. He responded that he only spoke Italian. After we yelled Metro enough times, he understood and directed us toward the metro. We said Gratzi and went on our way

AFter arriving at a tram stop, I was convinced that this was the "metro", but Dilyara was not. We then practiced our none existant italian language skills on two gentlemen. Of course, they didn't speak english. But when we said "metro", they pointed at the tram. So the metro was the tram. Luckily there was a small stand nearby. We purchased some tickets and waited for the tram to come.

Luckily, it came pretty quickly and we found ourselves next to Porta Nuova Station in Torino. We walked with our bags through the main strip in Torino and saw a lot of the old city. We then made our way over to the Porta Susa station, which is where our train would leave for Milan at 11:02AM.

We had walked all this way looking for somewhere to purchase some drinking water; however, we found nothing open. We only stumbled across a closed supermarket. We got to the Porta Susa station right at 11 AM and went to our platform. We then found out that the train was delayed 20 minutes.

Dilyara was excited for this oppurtunity, so she retrieved some expensive waters from a nearby stand while I guarded our bags. She got back just in time ( I guess the search was hard), and we got on the train to Milan. We arrived in Milan around 1 PM.