-
Today, we planned a big day. We woke up around 8 Am and set out. First, we walked across the town and across the covered bridge again while it was open. It was a completely different world. With all of the shops opened, we could barely see. They were all jewelry stores, and Dilyara stopped at almost everyone to gaze at the many wonders. I guess one day, we will be able to buy something off of the bridge for her, but not on this trip ;).

We then continued on toward Piazza del Michelangelo 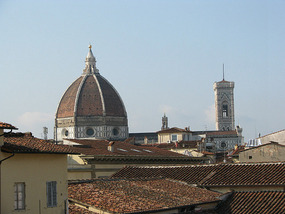 Florence
. It was located on a hill, opposite of the main downtown of Florence. It had a copy of the David statue in the middle of it and offered a spectacular view of the city. We took a couple pictures, one together, and continued up the hill toward Chiesa di San Miniato al Monte. This was a church, which also offered a great view of the city. We took some pictures and looked inside of this free church, then we made our way back down to the river.

Again, we crossed the covered bridge and examined the shop contents. We then continued up toward the main cathedral area. One more time, seeing the spectacular Florence Duomo Cathedral we were excited about the possibility of going into the church. Unfortunately, we decided not to go inside. We would have had to pay 10 euros each, and there was a huge line wrapping around the entire church to get inside. Instead we walked around the church a few more times and then continued down another street next to the Duomo.

We were heading toward Galleria Michelangiolo 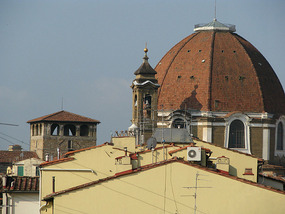 Florence
. This Museum housed an exhibition on Leonardo Da Vinci and we were excited to check it out. We paid 10 euros total to see the museum and loved every minute of it (except that the bathroom doors did not lock). It was hands on and displayed many of Da Vinci's mechanical works (including his museums involving various gear mechanisms, tank, wings, etc.). We spent about an hour and a half in the museum reading about his life and his works. There was also a section on anatomy. Did you know that Da Vinci first thought that air was piped through the body into the muscles? It was all pretty interesting and we enjoyed it.

After the museum, it was around 1:30 PM and we were hungry. Our train to Pompeii (new city, next to old city destroyed by volcano) was set to leave around 5 PM, so we had a couple hours to use. We found a nice restaurant a few kilometers from the main cathedral. I had a pizza margherita (maybe one of these times I will spell it write), and Dilyara had penne with vegetables. We also had some white wine.

Next, we walked through some more souvenir and market stores. Dilyara bought a hat so she could shield herself from the sun while we are in Pompei (old city, destroyed by volcano). A guy who sold it to us, had to kind of customize it, since the size was a little too big, pretty good for a five euro hatJ We also went to a supermarket and grabbed some water for the road.

We then returned to the hotel and grabbed our bags. Then made it to our train which left around 5 PM.
Other Entries
-