-
We woke up around 8 Am and grabbed some breakfast at the hotel (it was included). The breakfast was not the best. They had a couple of good items (the cheese, one of the cakes, and hard boiled eggs), the other items were pretty bad (yoghurt, old fruit, all the other cakes). We ate though, since it was free then headed to a nearby grocery store to grab some waters before we explored the old city of Pompeii.

After stocking up on 3 waters for our busy day in the sun, we headed back down toward the Villa de Misteri stop entrance of the old city Pompeii 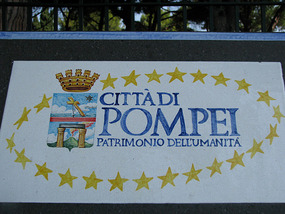 Pompei
. After arriving there, we found a large line which was not moving (because some Italians were yelling at the ticket seller). We decided to take the .75 mile walk back up to the entrance near our Hotel.

After arriving at our entrance, it was pretty empty, so we grabbed our tickets (11 euros per person, no student discount) and entered inside around 10 AM. We walked around the entire perimeter of the old city and then cut through the middle of the archaeological site to ensure that we saw the pertinent sites. We made sure to see Apollo's temple, human figures, Forum, public house and Baths. We left the site at around 1 PM. We felt that we had seen most of the important things and were ready for our next adventure of the day; going to the top of Vesuvius.

The bus was supposed to leave around 2 PM, so we grabbed some Pizza in a nearby restaurant while waiting. The pizza was ok, but one of the reasons that we went, was because the gentleman outside said that there would be no cover charge and no service fee 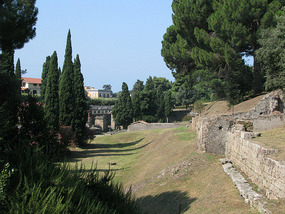 Ruins
. At the end of the meal, we found a 4 euro cover added to the total. We talked to the man outside, and he had the 4 euro charge removed. There was still a 10% service charge added, but we left it alone.

We then went to the bus stop. Upon arriving, the owner of the shop nearby started yelling at us that there would be no bus today. Apparently all of the buses in the city were on strike today, so this left us with only a few options. We did not know whether to believe the man or not and walked down a little way to find a Vesuvius tour offer. It was 20 euro per person for the ride there and back. It was a nice looking setup, so we decided to return to the bus stop to ensure the bus was not coming, then return and buy the tickets.

After arriving at the bus stop again, the nearby shop owner was not happy. He kept yelling at us "you think I am stupid? No bus today, no bus today". He said that at least once a minute. We continued to wait until about 2:05 PM and determined that the bus was indeed not coming 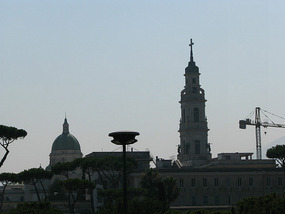 Cathedral in the new town
. Telling the shop owner thank you, we continued toward the ticket booth for the alternate route up Vesuvius.

We purchased the tickets for the 3 PM tour and then decided to walk toward the Pompei train station, which we could leave from to arrive at Rome the next day (those tickets would also be included in our Eurail passes). We scouted out the train station to make sure it was the right location for our tomorrow departure then made our way to a little ice cream shop. We ate some ice cream and then made it back to the “tour” start point.

Arriving about 5 minutes early, we sat in some chairs provided for us while all of the tour participants showed up. After everyone showed up, the tour was ready to begin. They led us to the vehicles, which we had thought would be nice buses…. Instead they had two “van taxis”. We were not excited but piled in. A couple of the participants gestured toward putting on seat belts, but we all found none and the taxi driver exclaimed that we did not need them 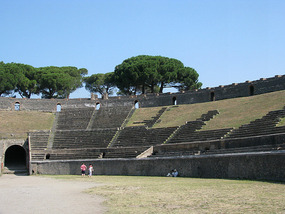 Ruins
. We also need to point out, that we hadn’t ridden in a car for over a month now (we only did trains), so it was pretty weird to us.

We set off down the road. It was not too bad of a ride until we were about to enter onto the highway. This required going through a toll booth, which seemed like our taxi driver had never done before. After him hitting the machine and yelling for about 7 minutes, we finally made our way past obstacle number one.

Now, since our taxi driver was behind the other driver for about 7 minutes, he felt inclined to catch up with him. On the toll road marked 60 kmph, he decided to go 140 kmph while weaving in and out of cars. Needless to say, we were all holding on for our lives. He also enjoyed honking at cars during this entire ride.

Once we were off of the toll road, we began making the drive up the mountain. This consisted of a number of sharp curves where drivers are unable to see if cars are coming in the opposite direction 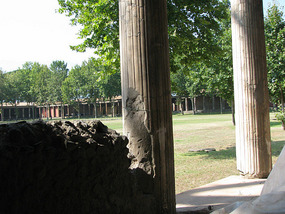 Ruins
. This did not deter our driver, and he drove as fast as possible while not really caring which lane he was in. If we almost hit a car, he would honk his horn as many times as possible while yelling out of the window.

At the end of our 40 minute car ride we were let out of the car. It was not 3:45 and we were told to be back at the lot by 5 PM to grab the car ride back. Dilyara and I paid 8 (student discount) euro per person to enter the national park at Vesuvius. We then began the trek to the summit crater of one of the few active volcanos in Europe. It is also considered the most deadliest active volcano, because if it erupts it has the potential of effecting more than 3,000,000 people.

Normally, this hike would not have been very bad. It was about a 45 degree vertical which wound its way up the volcano to the top; however, it was covered in the smallest, loosest stone imaginable. This meant that every step taken slid back another half of a step 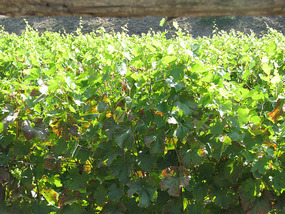 Vineyard
description
. Regardless, Dilyara and I trekked on.

We decided to power our way to the farthest point, then enjoy the view slowly on our way back. We made it to the farthest part of the crater in about 30 minutes. There we bought a lava cat and began our way back around the crater and down the mountain. We enjoyed the scenery and would recommend going to the top to anyone (just find a better car ride).

We made it back to the lot at 5, got in the car and began our way down. This was equally as treacherous as the way up, but we definitely had many more “close calls” with other cars on the way down.

The rest of the ride was the same. Yelling, honking, swerving, speeding… the normal Italian thing we guess. As we approached the toll booth again, I whispered to Dilyara “Taxi Man versus toll booth…round 2”. About 10 seconds after I said that the taxi driver slammed on the brakes of the car. The gate to allow cars in to pay had almost shut on top of the car and he was forced to put the car in reverse and go into a different lane. I guess the toll booth one the day. We have also learned the best way to make a left turn on Italian road. You just honk your horn many times first, then get your car in the middle of the intersection, pretty much blocking people with a right to go, then honking some more and finally turning.

After arriving back in Pompei, we decided to stop by the grocery store and then headed back to the hotel. Tomorrow, Rome.
Other Entries
-