-
We woke up around 9AM and did the normal breakfast routine at Ricks Café. Then we took the subway to Piazza Popolo. The we walked on Via del Corso through different shopping stores (obviously Dilyara arranged this day). As she shopped in the clothes stores, I raced buses recklessly on the IPad. Unfortunately, Dilyara never went to the shoe stores, so I always had some competition on finding a comfortable seat in the shops.

We then went to Hard Rock Café for lunch 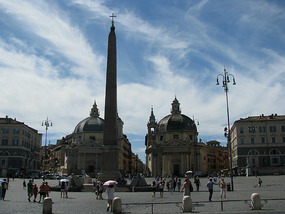 Rome
. We had some Nachos, the Veggie Leggie burger, and the Barbeque Burger. We ate the nachos and were already stuffed, but then we were ready for the final kicker, the sandwiches.

The burgers came to the table and then we began to chow down. Dilyara started with her French fries and I began to eat my burger. Then, Dilyara took a bite of her burger. She immediately began to make yuk, and coughing sounds and spit out the bite she had just taken. She said it tasted like meat. So I took the patty and she ate her fries.

I finished my burger and then took a bite of her patty. It tasted quite strange and did not have exactly the same texture as a meat patty. The only resemblance it had to being a meat patty, was that it tasted a little burned. I told her that I did not think it was meat, but she said it was. We then turned to who would know best….Google.

Google told us it was in fact a vegetarian patty; however, DIlyara was scarred from the traumatic event and could not eat the patty (it turned out to be one of those fake meat pattys, that Dilyara never buys, so she had no idea how they are supposed to taste, since they did a pretty good job on the texture, she was absolutely sure it was meat) 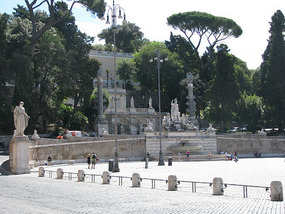 Rome
. I ate what I could and we left the restaurant.

By this time, we were both ready to take a long nap, since we had eaten so much. We made the final walk toward the park where the Museum Borghese sits and found a bench to relax on. Wherever we sat, the sun always found us after about 15 minutes. So our rest turned into running from the sun… and ants.

The next thing we knew, it was time for us to go to the Museum (5 PM). As soon as we stepped into the museum, it was chaos. It was super unorganized and everyone was trying to make reservations (which you were supposed to only be able to do over the phone). Eventually the one person selling tickets to everyone said she would not do it anymore and decided to only help people with reservations. This made the line go quicker and we got our tickets. Then, we checked our bags.

We walked through the museum for about 1.5 hours and then left. It was interesting and we saw some nice pieces of art. It wasn't that big though, two floors only, with about 10 rooms each.

Next, we wanted to check out the Ice Bar in Rome, so we decided to go back to the hotel and get changed first. Unfortunately, we were tired and once we got home, we went straight to sleep.
Other Entries
-