-
Today was our Vatican day. Originally, we wanted to check out the papal audience and see the pope, but then we decided that there would be too many people (I had seen the pope last time I came to Rome this way). Instead, we decided to go straight to the Vatican Museums (and Sistine Chapel).

Maybe everyone was still in Papal Audience, but when we arrived at the Museum, there was almost no line (around 11 AM ) 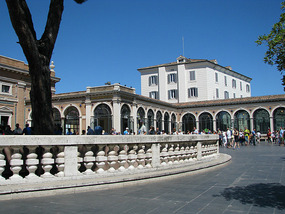 Vatican City/Rome
. We then proceeded to see all of the museum and the chapel. We finished up around 1:30 PM and then walked to St. Peters Square in the Vatican City. The line to get into St. Peter's Basilica was insane (it snaked all the way around ST. Peter’s square). We decided not to wait in the large line, took some pictures, and then walked toward Castel Saint Angelo. We walked around the castel (which use to be where Hadrian’s ashes were), decided not to go inside (I had gone on my last visit), and then proceeded to walk along the river toward Piazza Navona.

We made it to the Piazza and then we found a Pizza Restaurant. I had the normal and Dilyara had tomatos with Mozzarella. We saw the old Jewish Synagoge and another old amphitheater.

By this time it was 5 PM and we began searching for the Ice Bar. After walking circles around where we thought it was, we finally found it. With our map we had to pay 15 euro per person, which paid for the cover and 2 drinks per person 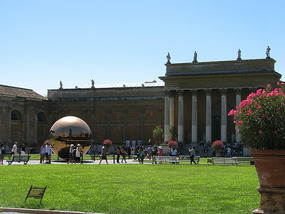 Vatican City/Rome
. We suited up and entered the -5 degree celcius bar. It was an experience. The walls, seats, bar, everything was made of ice blocks. They even had little igloo rooms. Our drinks were served in ice glasses. All-in-all we can say we did it. It would probably be fun to go to as a club in the evening. At this time, it was only Dilyara, I , and the ice. We had our drinks and stayed around 40 minutes in the cold atmosphere. It was a tremendous relief from the heat outside.

Once we stepped outside, we still had the nice relaxed feeling for about 10 minutes, and then we started sweating again. DIlyara and I wanted to see the city at night, so we found a café. We wound up drinking a half liter of wine, playing connect 4 on the Ipad, and eating 2 pizza Margheritas for 3 hours. By this time, it was 9 PM and the city was darkening.

Since we were so close to the Coliseum, we walked there first. Next, we walked slowly toward Trevi Fountain. This brought us through all of the touristy sites of Rome. Rome is definitely a city to see at night time. Everything is perfectly lit up.

We got back to the hotel around 10:30 PM and got some sleep. Tomorrow, we are heading to Rimini, which will be where we visit San Marino from.
Other Entries
-