Medieval City On A Mountain

-
Today was our day to visit San Marino. To do this, we would have to take a 45 minute bus from the train station; however, we had other priorities first… breakfast. We walked to the bottom of the hotel and saw people eating breakfast. We thought that it was included in the price, so we sat down and ate from the "less than par" buffet bar. The only thing worth having was a hot chocolate.

After breakfast, we made our way to the train station and caught the 9:25 AM bus to San Marino 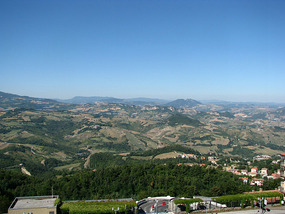 San Marino
. The bus was full of Russians, so Dilyara did not let me practice my Russian language skills for this entire part of the trip ;(.

Arriving in San Marino around 10:30 AM we had a decision to make. On the bus, they had advertised a train that would take us to the top of the mountain. We could either take the train, or walk. It was not much of a decision for us… since we would have had to pay for the train, we decided to take on the walking challenge (we found out it was not much of a challenge at all).

San Marino is very much a medieval city. It has old castle walls, towers, and old winding paths throughout the mountainside on which it is situated. Dilyara and I wound our way up the somewhat steep paths and roads through the city until we reached the three towers. We walked between the three towers, but we did not enter into them (by paying, one could enter into two of the three towers). We decided not to enter, because the view of the valley was already amazing from the base of the tower 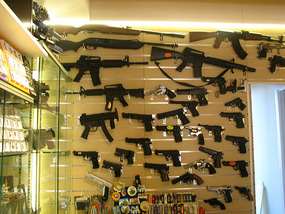 San Marino
. The tower was only about 40 feet into the air, so it would not have given much of a better view.

We then continued to walk along the highest points of the city and found a nice café. I had a beer and a pizza margherita and Dilyara had some Spaghetti with tomatoes and peppers. The food was of normal quality, but we picked the place for the location/price. We were able to sit right on the side of the mountain and look over the amazing valley view (you could see all the way to Rimini!) while we ate.

After eating, we slowly made our way down the mountain back toward the bus stop. On the way down, Dilyara bought some Souvenirs and we bought a bottle of Limoncello. Limoncello is a liquor drink that is special in Italy. This one was particularly for San Marino (25%) and we thought we should give it a try. For 3.80 euro, we purchased a 500 mL bottle.

We arrived at the bus stop a few minutes early, so we looked through a few more touristy souvenir stores while we waited 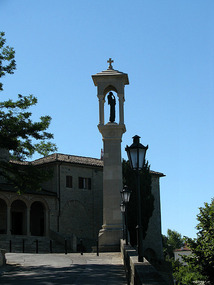 San Marino
. We then grabbed the bus at 1 PM.

Getting back off the bus at Rimini train station around 2 PM, we decided to explore a little bit of Rimini. We walked through the city, seeing all of the “high points” on the map. It was not that great…. Rimini is definitely just a stopping place on the way to San Marino (or a beach city).

We made our way back to the hotel around 4:30 PM. We got changed, wrote some emails and then back out into the town.

This time, we walked toward the beach again. Walking along the street which follows the sea, we saw many people, street performers, and a lot of places to eat. We decided to grab a large pizza for 12 euros (pizza margherita of course). We were a little upset, because we purchased the same super large pizza for 6 euros in Torino, but this was a good price for this location…

We took the pizza back to our hotel, ate our pizza, drank some Limoncello (not tasty at all ;(), and watch a movie.

It was around 11 PM when the movie ended, and we were ready to sleep. Again, it was super hot. As we tried to push the super hotness out of our minds, a group of people decided to sit just below our window and be as loud as possible. We closed our window (making the hotness hotter), but could still hear the people. They finally left around 2 AM, we opened the window, and tried to get some sleep.
Other Entries
-