-
We awoke around 10:30 AM and made our way to a little café in Mestre. We had cheese gnocchi and also spinach and potato gnocchi. It was overpriced, so we decided to not go there again. Then we grabbed the train to venice, for our second day on the island. 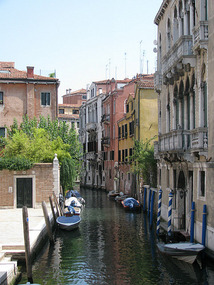 Venice
. So, in order to keep up with where the good stores were, this time I drew on the map where we went. The free maps of venice are terrible. They outline the streets, but only every 7th  street is actually outlined.

Today, we walked more southeast toward the southern coast of the main island. We found some interesting shops and eventually wound our way back to St. Mark's square. While there, we visited Doge’s palace. This had exhibitions of the court cases and rooms in which they were held there. It was an interesting museum. It also had a jail area, which was easy for tourists to get lost in.

I guess I look like a Russian, because some lost Russian woman asked me if I spoke Russian. I responded "not from Russia", in my best Russian accent. She was not humored by my amazing accent and continued on her way.

After we got out, we slowly made our way back toward the train station. We got the train around 7 PM and got some sleep for the next day.
Other Entries
-