-
Today, we had to change hotels. We could only book two nights in Hotel Piave and had to change to Hotel Regit for this last night. We checked out and brought our bags to the new hotel in Mestre, then got the train to Venice (11 AM).

Today, was our buying and final exploring day 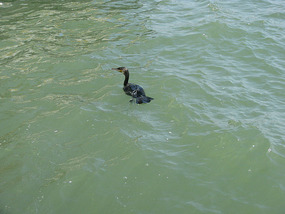 Venice
. Dilyara bought an O-Bag and some souvenirs from the shops we had marked on the map from the previous days. We then walked more on the west side of the main island. We found a small café with free internet, so we decided to grab some lunch.

I had a calzone and Dilyara had a Pizza (eggplant, zucchini, cheese, peppers, tomatoes). While eating, we watched a documentary on the history of Venice on the Ipad. After sitting for sometime, it started to get crowed at the café, so we switched off the Ipad and continued on our journey.

We found a grocery store and stocked up on waters. We then continued to walk around the island. Eventually, we found our way back to St. Mark's square and snaked our way through the streets to the train station once again. We took the train back to Mestre around 6 PM.

All-in-all, we saw pretty much everything in Venice. We concentrated our walking in the middle of the city (seeing it almost everyday), because this is where most of the touristy activity is; however, we also got to see the "not-so-touristy" streets while exploring the west and east sides of the main island. We also decided not to do a gondola rid, because it would have been 100 euros for about a 30 minute ride. We decided to use our money later, for something that we would both enjoy more.

We got back to Mestre, stopped at the grocery store, and retired to our hotel room. We watched a movie and went to sleep.
Other Entries
-