Getting our Feet Wet on Hawaii

Kara was up way before the crack of dawn so when I slowly twitched in my bed at 7 am, she jumped up and greeted me cheerily with an "Oh good, you're awake 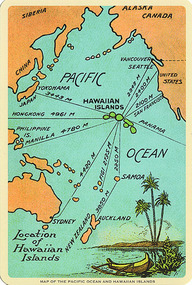 Map of Pacific Ocean with Hawaii
description
. should we go for a walk?"  I tried to go back to bed but it didn't work.

We collected ourselves a bit and went downstairs - it took awhile to find our way in this huge complex - to the coffee shop. They didn't have yogurt so we bought the equivalent of two macmuffins and one large latte for $25. Our resolve to find a supermarket was strengthened. We explored the Hilton grounds by wending our way along the coast to get to the place where we were to meet our concierge at the scheduled 9 am meeting. So we saw a lot of the pools, waterfalls, some koi, a church/wedding chapel and the major lagoon where people were swimming.

We met with Marcia the concierge who was very nice and extremely efficient. Based on a few things that we were interested in that I had emailed her, she set up tentative daily itineraries marked with different color highlights on a map of the island and she color-coded this with various written materials. She gave suggestions on where to get groceries and where to get less expensive meals and still enjoy some of the special features and events. We found out that it was whale season and the whales could be seen from the Hilton grounds and all along this area coast. I have yet to see them however. She gave us tons of into in that hour and we were to set off and map out our stay.

I, however, was anxious to get out there so we planned to start driving north to the Waipio Valley - a relatively short drive - and take a short hike to the black sand beach 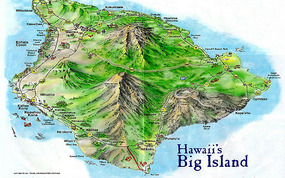 Map of Big Island - Hawaii
description
. Marcia had suggested that we stop in the village of Hawi where there were old-style Hawaii buildings and galleries and a few less expensive but good authentic Hawaiian eateries. We did stop there and went through a few galleries - one with fantastic wood block prints with native birds and plants and another gallery with a special technique to dye gourds the old-fashioned Hawaiian way which only recently was able to be duplicated by the artist who showed us his gourds. I found a bead shop and bought a few beads and the proprietor told us about a BBQ place across the street that was very good. We had been a bit hungry by now and even though we had cheese and crackers we opted for the BBQ fish - one with caesar salad and one "all" dinner. I walked up a side road and bought some gatorade and iced tea to drink.

After Hawi, we headed north to find a small park for our picnic on recommendation of the bead store owner but somehow missed it and landed at the dead end for the lookout above the black sand beach 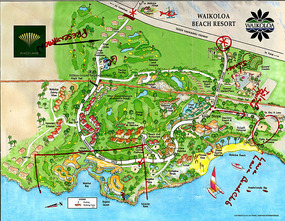 Map of Waikoloa Beach Resort - Hawaii
. So we sat on the wall overlooking the point and ate our food. Quite good. Oh, Kara had met a couple from CA while she was waiting for our BBQ and they gave us more tips on places to eat on Hawaii. They were very nice. We kept running into extremely nice people.

On our way back, we were looking for the road that would give us a scenic view of the coast. We drove past the little park and I thought from the map that we should be turning off somewhere around here but there was no turn. It was very confusing. So we kept on going and then found the road that turned off - exactly where I had walked to get the gatorade. We were glad that we took this road because the scenery was so different. Here the fields were bright green and there were evergreen trees along the road. We even saw black cattle in several of the fields. In the distance we could see Mauna Kea's observatory buildings shining a bright silver and what looked like snow. The landscape that runs along the road taking us to the Hilton is volcanic lava rocks and not much else so it was really interesting to see this sharp contrast 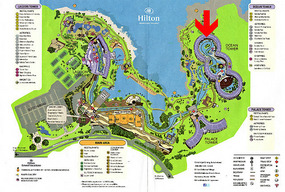 Map of Hilton Waikoloa Beach - Hawaii
. It had also gotten fairly chilly and Kara and I kept wanting to get warmer clothes on - beyond our short and long-sleeved shirts respectively.

We debated on whether to buy groceries, head back to the hotel, or go straight to the free hula and fire show. We ended up buying our groceries after having to use the gps to find the grocery store in Waikoloa Village, then going to Mauna Lani Shops to see the show, then to the Lava Lava Beach club for cocktails (but not food since the kitchen closed at 9 pm) and then back to the hotel. It is amazing how much difficulty we have had finding our way around - missing roads etc. We managed to miss the grocery store and then miss our hotel and land up back at the Kona Airport (18 miles) before we realized it.

The show even though it was free was quite good. The dancers did dances from Hawaii, New Zealand and Samoa (maybe Tahiti too). Their costumes were nice. Or their lack of costumes showing off their nice young bodies 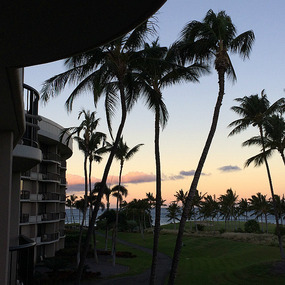 Sunrise at Hilton Waikoloa Beach - Hawaii
. The high point was the fire dance. The young man who did the fire dance twirled the fire batons around at high speed - close to his body in a quite spectacular way. So we didn't mind being cold so much - the performance was outdoors in a shopping mall. The wind makes it quite cool even though it was in the low 80's or high 70's. We really had a hard time believing it was so warm when we felt so cold.

When we got our cocktails - we looked for something new - I had the one Kara had chosen at first - with vodka and pomegranate juice called ocean something and Kara got one in a coconut shell that she got to keep. She is planning on using it as a cereal bowl tomorrow morning We have a refrigerator but no dishes. Marcia told us we can get a microwave if we ask for it. We may have to - we'll see.

Kara started to do our itinerary planning but once we realized we needed to check on excursion availability, she stopped and went to sleep

Kara with our $25 croissants & shared latte
description
. I had only just started this blog so she will have to add her comments tomorrow and do the next day's blog I think. Time to try to upload my few pics and go to bed too.

Oh, I forgot about the walk to the point - even though the walk was short, the path down to the black-sand beach was very wet and slippery in spots. I walked down very carefully and hence very slowly. I did make it down intact and we got to the beach - on one side of the little stream. We didn't bother to cross to the other side but Kara decided to go wading so we both took off our shoes so we could get all that lovely fine-grained black sand on our toes. It was fun. I loved the lava rocks down there. We didn't see any marine life or even any birds but there were some interesting flowers and plants along the way.

Nice, mostly relaxing day - now to step up the pace a little to cram all those wonderful sights and experiences in!! 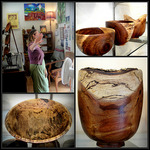 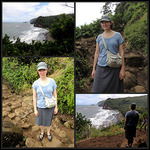 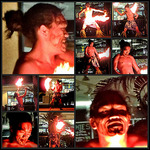 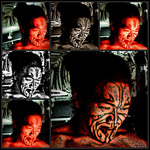 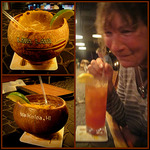