Coffee at Hula Daddy's and Luau at Kona Marriott

We hadn't decided what to do today until this morning 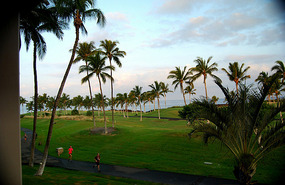 View from our balcony - Hilton Waikoloa Beach
. We settled on the coffee plantation tour before the time share presentation. So after breakfast and organizing, we drove down towards Kona to the Kona coffee plantation area above Kona.   Daddy's Coffee Plantation was recommended by Marcia the concierge. We drove there via GPS and found a smallish building within a gated yard. The place opened at 10 and we were their first visitors. There seemed to be another two people but they disappeared before the tour so Kara and I ended up having a private tour by one of the staff and Karen - co-owner-wife. She was a former LA HR person and Lee, her husband, says he is a recovering lawyer. Karen mentioned being type-A's when I said I was impressed that two people with no background in growing coffee would produce award-winning products.

We started by looking at the coffee trees 7000 of which have been planted. I can't remember when - the plantation is not that old because Karen isn't that old now. There is also a higher elevation grove but we are touring the lower one 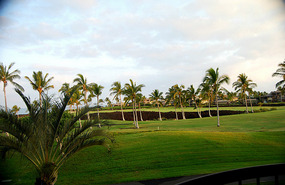 View from our balcony - Hilton waikoloa Beach
. Two or 3 foot holes are dug - or maybe more - into the volcanic rock and filled in with soil and stuff to make the coffee plants - arabica - grow. They have mostly the bourbon variety. It is pronounced differently than I am used to hearing it. The plants are close to flowering now. They produce for about 6 months and the berries are picked over weekly as they ripen to make sure that they get the best ones. Karen told us that they pay the 10-12 pickers hourly so that they will be "pickier" pickers.

Once the berries are picked, some of them are handled differently from the usual process. Lee decided to keep the mucilaginous layer and that makes a sweeter coffee. Then he decided to keep on the skin and dry it with the skin on. This takes longer - thus adding to the cost. It is also more difficult to remove the skin after drying. Both of these processes, however, have led to very successful coffees. The one with the skin has been rated 97 - one of only 10-12 coffees to have done so 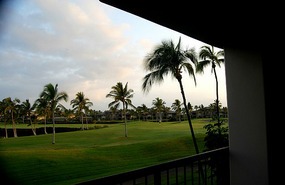 View from our balcony - Hilton Waikoloa Beach
. The other is a 95 I believe. Karen told us about the boars they ruin the trees - they catch an average of one per week and donate them. She said we might even be having one at our luau today. They have a garden out front and our tour guide explained about the several kinds of gardenia (coffee is related to the gardenia plant) and the yellow-blossomed Hawaii state flower - a yellow hibiscus. Kara and I bought some small sampler packs after drinking several little cups of coffee. Their coffee was good but quite pricey. We also tried two of their teas which had some coffee influence in their production.

On our way back I thought we should travel a little longer on the higher road that we came upon on our way there. I was looking for a turn off but didn't find it and we ending up taking the road all the way to the Waikoloa Road - a bit out of the way - but it was nice to be high up and see the ocean and also some different scenery. Mostly we saw chunks of lava rock and different grasses - some houses - some farms 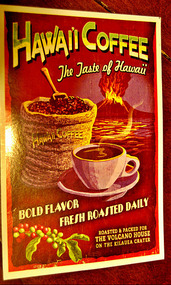 Hawaii Coffee - postcard
. We thought we would have lots of time to get to the time share presentation, but, because time was slipping away, we stopped at the Waikoloa Village Market and picked up some sushi for lunch plus some yogurt and granola for future breakfasts.

We ate our lunch in the parking lot outside the place where the time share appointment was. The young woman - Gen - who gave us the talk was very likable. Her parents came to Hawaii on their honeymoon and didn't leave so Gen was born and raised on Hawaii. Her boy friend races and works on hot rods and they travel to go to races. She graduated from college with a degree in Pacific Studies and ended up working on Midway Island for three years before getting into the hotel and real estate businesses and from there to time share for Hilton. We listened to the entire presentation, saw the very fancy two-bedroom unit and then finally said we couldn't be persuaded to buy into the program. For roughly $18,000, I could get the use of a one-bedroom condo for one week every two years or a studio every year plus pay $1300 per year in expenses. They said it was a way to upgrade your accommodations. It probably would be a very good deal if you typically spent over $200 per night on hotels. Gen seemed disappointed when we didn't buy and we parted quickly as she went on to her next appointment. It wasn't an entirely wasted experience because we learned some things about the island and, otherwise, I would have had to pay more for our hotel accommodation - full price - but I actually don't know what that would have been 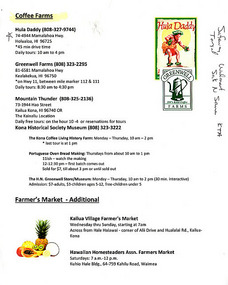 Now we had thought we had loads of time before our luau but when we found out the check-in was 5:15 pm, we realized we just about had time to throw on a change of clothes and hop back in the Jeep to drive down to Kona. The traffic was bad and we were afraid we would be late but we had about 5 minutes to spare when we got there. We were ushered in. They took our photos. Everything was quite organized and we were led to seats. I was across from Kara at a table but it was hard to see her because of the sun shining in my face. The woman emcee sounded a lot like the one at the free hula dance show we went to the other night. Maybe they trained together somewhere. This show was more extravagant but very similar in that they did dances and acts from different Pacific nations. The woman emcee made a big point of trying to make us into a family and she emphasized the values of the Polynesian people. We got to see some crafts. Kara and I both got temporary tattoos - she got a turtle and I, a butterfly. We saw the pig being taking out of the pit and carried off where it was basically shredded. The food was excellent. The emcee encouraged everyone to try the poi but, if we did, most everyone found it a lot like purple paste. The raw salmon dish that looks like salsa was spicy and one of my favorites. I tried the coconut milk desert and that was good - it tasted like coconut and felt like jello.

When we got back to the hotel, we had to organize for an extra early departure tomorrow morning for our snorkeling tour which leaves farther south than where we went tonight. 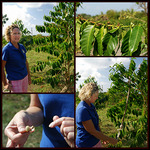 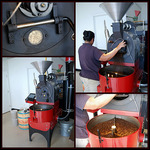 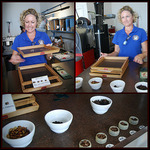 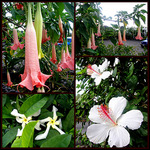 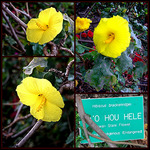 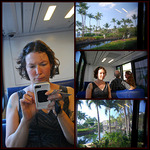 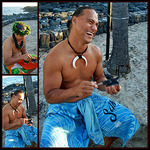 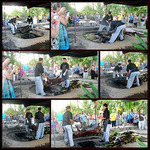 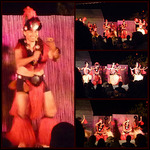 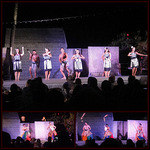 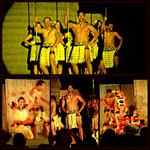 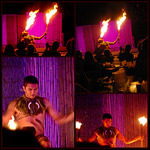