Drive from Waikoloa to Volcano Village

It feels as if it has been a very long day 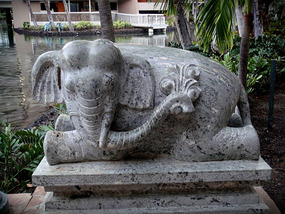 Hilton Waikoloa Beach - Hawaii
description
. Kara has gone to bed and it isn't even 9 pm yet. I have been ready to go to bed for a few hours already too.

We got up around 7 am but didn't leave the Hilton until 10 by the time we packed up and checked out. It seemed to take ages for the tram to get to the main tower - whatever it is called. They only had two people on the desk and they answered every question the people they were serving had....I seemed to wait forever. It was a bit sad to leave the Hilton because there is so much to see there and we never got to swim with the turtles or see all the sights in the huge complex. We did ride the old boats yesterday though and appreciate the art displayed in the Museum Walk.

Our first stop was the snorkeling site up the road at #49 Black Sand Beach off Mauna Lani Drive. We saw some high end houses there - they were gorgeous. It took a bit of driving around before we found the beach. It seems as if this is always the case here on the Big Island 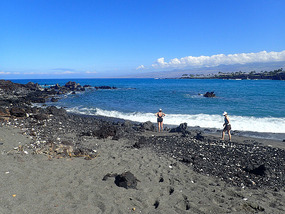 49 Black Sand Beach - Mauna Lani Estates
description
. Signs and directions somehow don't seem to work all that well. In any case, we took the public access path to the beach, settled in and put on our snorkeling gear and entered the water. Water here on the Big Island is rougher than I am used to...I almost get knocked over by the waves if I am not careful. Kara and I started swimming around but the water was very cloudy and no fish to be seen. We were ready to give up when a gentleman tipped Kara off that there was better viewing closer to the rocks. She went off for better snorkeling.

By now I was getting a bit seasick from being buffeted by the waves and decided to pack it in. I kept looking for Kara and had just about formed my plans for cancelling reservations in Volcano to continue to look for her when I spied her and the gentleman coming back toward the shore. She said she got to see a lot of fish including the angel fish she saw yesterday but didn't get a photo of. We didn't get it this time either since I had the camera 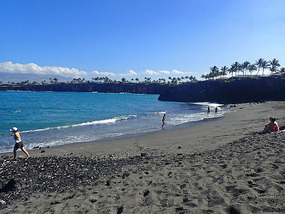 We sat in the sun and dried off a bit before going back to the Jeep and continuing toward Kona. By now it was around noon so we decided to try to get some sushi along with our groceries at the K-Mart Big K in Kona. They had a Little Caesar's but we decided we didn't want to stand in line so long for Little Caesar's pizza and headed into Kona downtown after getting our groceries and some remaining souvenirs and some cocktail mixes. When we went to check out, we couldn't buy our cocktail mixes in the line we were in so I went off to the customer service line. A woman was returning the bicycle she had bought for her son. Something was wrong with it but there were no replacements. So she got her refund and was buying some other stuff I think. The rep asked her if she wanted to use her K-Mart or Sears points and the woman said yes, but it turned out to only be 12 cents. Apparently they had expired so the rep asked if the woman wanted her to try to recoup them 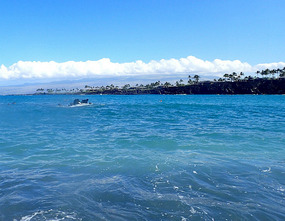 49 Black Sand Beach - Mauna Lani Estates
. The transaction seemed to go on forever and ever. I had the impression that people in Hawaii just like to do everything for the customers standing in front of them and do not worry at all about lines. Maybe that is a good thing.    In New York, sales people would start getting anxious if a line formed in front of them.

Once we got to downtown Kona, we parked. I told Kara to park far away from where we were going. Not I am not sure why but it worked out OK. We had lunch at a place called Fish Hoppers - the best seafood in Kona. It was OK - I loved the description of my dish - but not as good as Annie's yesterday. I had purple mashed potatoes that were really lovely though.

From Kona, we drove past yesterday's snorkeling spot to try to find the road to Pu'uhonua o Honaunau National Historical Park. Actually the roads there were much better and easier to follow that I had thought. The park was on the ocean - which did create a problem since the high waves from last week had destroyed one building and damaged other parts so that the part that Kara and I really wanted to see - the temple and tikis - was closed 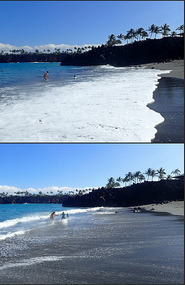 49 Black Sand Beach - Mauna Lani Estates
description
. I then planned to buy a postcard of the temple and tikis but the gift shop was closed too by the time we got back to the entrance. Hmmm.

From there it seemed as if we still had a considerable drive left before we got to Volcano. The terrain changed several times but wasn't as bad as I had anticipated. We easily went past the road with 120 S curves and another curvy section. We went through a Kona coffee growing area and a macadamia nut growing area. There were other areas that were covered with lava rock and dying trees. Another area with lots of scrubby bushes. We ran into a fair amount of rain once we hit the east coast.

Then before it was completely dark, we arrived in Volcano and put on the GPS to find our lodging. We settled in. There were breakfast items left for us - to cook - a surprise to me since I thought they were making breakfast and I told Kara we didn't need to buy bread since that would be part of the breakfast....but it isn't. There is only one king bed....but I see now that we have a sofa bed too. The place has a full kitchen and laundry facilities and we can use a hot tub at the main lodge.

We had our chips and salsa snack dinner tonight. Tomorrow we will have to cook a bit more. We watched some TV and I am now working on the blog with our wi-fi - hope it is still on. The Hilton wi-fi was erratic and I kept getting bumped off while doing things. Well, I'm done for today....it's now time for me to go to bed too. 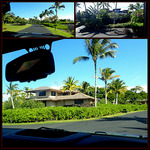 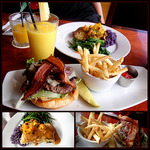 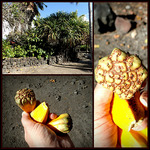 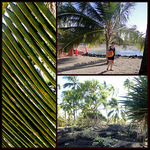 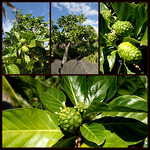 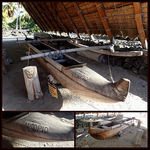 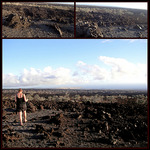