Hawai'i Volcanoes National Park
description
. I started coffee and made the fruit salad with some of our fruit - the pineapple in the fruit bowl was ripe and nice and sweet. Kara made our huevos rancheros with our extra salsa so we substituted tortilla chips for toast since the breakfasts the rental was providing were comprised of eggs, coffee or tea, and fruit. The breakfast turned out quite adequate and good!

It wasn't that early by the time we made it out to the park. I used my Senior Pass to get in - the ordinary car parking fee goes for the entire week, but somehow I lost the piece of paper. We may need to get a new one tomorrow. As we got to the Visitor Center, a ranger was giving a talk on the history of the volcanoes here. There is Mauna Loa - the biggest of the volcanoes on the island of Hawaii; Mauna Kea (White Mountain) - the highest, with the observatory; and Kilauea - the active one, the steam of which can be seen from the Jagger Museum. Right now the caldera of Kilauea is closed and half of the Crater Rim Road and Trails are also closed 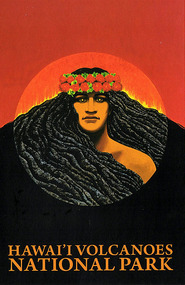 Hawai'i Volcanoes National Park
. We have been told that the latest lava flow has gone through a small town of Pahoa where a home and the transfer station have been destroyed. The flow has been stable since last Monday.

After the talk, we did some shopping in the gift shop. I heard an announcement of the next ranger talk on plants and invasive species so we joined that. It was a short walk to the Kilauea crater rim with another ranger - this one a young woman. She had a good spiel and we learned about the invasive ginger and the invasive Portuguese tree as well as several of the native plants like the koa tree and ohi'a, the one with the red flowers. She showed us tree ferns and some other ferns too and we got to look at the crater floor from the rim, or would have been able to see it, if it hadn't started raining....at one point hard enough to get quite wet. Kara was lucky I bought her a Volcano National Park poncho so we only got our legs and shoes wet. By the end of the walk, it was noonish. As we started to talk about lunch, or maybe it was this morning, we realized we left most of our dry food - all the granola bars, the packs of trail mix, crackers and some of my orange utensils at the Hilton. Alas, lunch would be skimpy....it turned out to be some of the last remaining trail mix we had.

We decided to do one of the walks - after having one of the rangers give us options and recommendations: the Kilauea Iki Trail 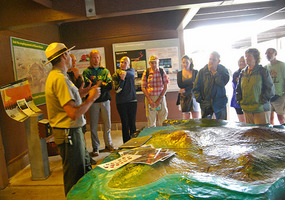 Visitor Center - Hawai'i Volcanoes National Park
description
. I felt I needed water so we did some shopping at the Volcano House gift shop and I got a gatorade drink. Kara declined a beverage because there was going to be a fountain somewhere. We started off on the Crater Rim trail after repeating some of the walk we did with the ranger. Finally we thought we found the Kalauea Iki Trail. Here, as elsewhere on Hawaii, we found signs not to be as helpful as we would have liked. Some of the plant signs didn't seem to have the plant they were describing anywhere near. Anyway, we took a side trip to the Thurston Lava Tube which was great. It was quite long and there was a rounded passageway with lamps lit along the way. A woman was singing and the sound was so expansive - Kara & I thought it was some recorded Hawaiian music. It was absolutely stunning. I should have tried to record it with my coolpix video. Alas, what a loss. 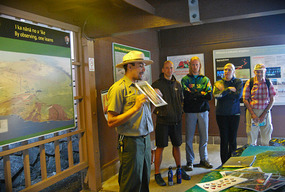 Ranger talk - Kilauea Visitor Center
description
. There you found a lunar type landscape with a hard lava surface for the most part. There were cracks with plants growing in them and spots where the lava sort of bubbled and broke up so there would be dome-shaped mounds - most with holes in them. Then there were some bigger mounds, and piles of lava rocks. One pile farther on had steam coming out at the top. There were a bunch of military people in uniform walking through and quite a few were enjoying the big vent. After that vent, there was a bit more of the trail on the crater floor before it rose quite steeply up stairs to meet with some other trails including the Byron Trail. We got to a point where we had 1.2 miles to the Visitor Center or 1.6 miles if we took an alternate trail. Even though I was tired after the uphill climb, I thought it might be nice to go a different way if there was less than a half mile difference.

At one point, I thought I made the wrong choice. We chose the longer option - the Halema'uma'u Trail and at first it seemed like a nice little trail through the forest 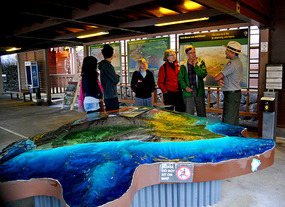 Ranger Talk - Kilauea Visitor Center
description
. Then it started going down - down the path and down steps, down and down. Now I know what goes down must come up so I was getting a bit scared by the thought of so much uphill to come. We ended up down on the crater floor again. This time it was the Kilauea crater itself - which was pretty special since it was only a small sliver that was open since the rest was closed off - roads and trails. It didn't look that much different but I was glad that we had done it. We could see a sign prohibiting anyone from walking any farther. After that brief exhilaration, we had to climb back up to the top. There were a few places where it looked as if we might have a reprieve and it might not be as stiff a climb but it was still pretty tiring. Finally we were back on top heading to the Visitor Center.

I persuaded Kara to drive to the Steam Vents down the road toward the Jagger Museum and we got to see and smell and feel the warm, sweet air rising up from the Kilauea caldera somewhere. The whole area was surrounded by steam vents - on both sides of the road. In the field in between there were lots of those bamboo orchids - on tall stems. We had seen a few of them before on the various trails.

After the vents we headed for our house where Kara prepared our packaged ramen noodle soups and our steamed broccoli while I organized and unpacked (I think). We had a nice meal and then headed out again to see the Kilauea blazing orange steam in the dark from the Jagger Museum lookout. It was nice but we couldn't really see lots of hot, molten lava. Alas. We returned to the house for showers, uploading photos, blogging and watching people buy beach houses in the Caribbean on TV. Kara is already asleep. I am finished here and need to shower. Unfortunately, I haven't gotten to my postcards which I had intended to do tonight. It's almost 11 pm so it will have to wait until tomorrow. 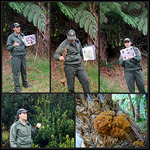 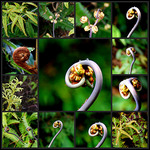 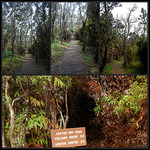 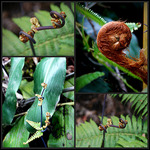 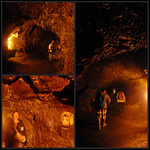 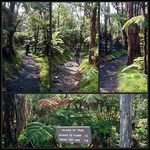 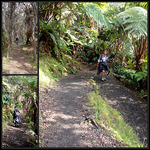 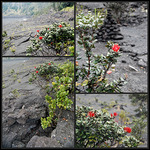 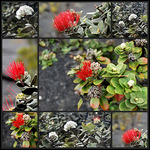 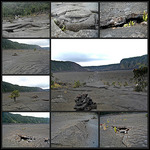 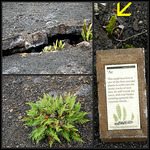 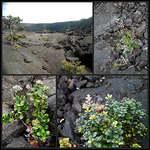 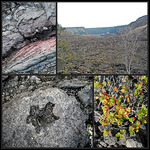 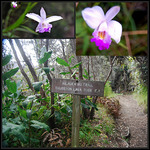 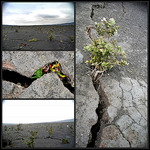 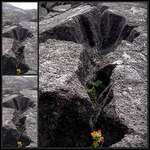 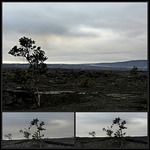 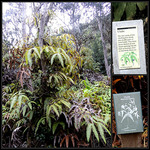 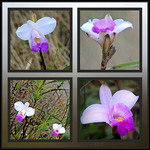