In Search of Volcanic Activity

Today Kara decided to sleep in again - she says because it was the other side of the island - so we had an even later start after our usual breakfast of huevos rancheros, tortilla chips & fruit salad 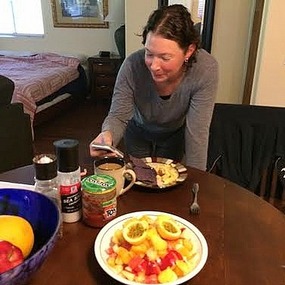 Kara eating breakfast - Volcano Hawai'i
description
. I have an extra special pic to go with the fruit salad.

I had been obsessed with getting to see the latest lava flow in Pahao. The young woman cashier in the park gift shop had told us about the beautiful transfer station and I was raring to go. It was a 20 mile or so drive to get there - north on rt 11 and then taking a highway bypass to Pahoa. When we got there, we found that the road to the transfer station was closed. I stopped to buy some postcard stamps at the Pahoa Post office and the postperson said that the viewing spot was indeed now off-limits and she missed seeing the hot lava too.

This was my latest experience after K-Mart of standing in line in Hawaii. There were about 4 people in front of me and they had their little chats with the post office staff. I wanted to save time so I asked the woman with lots of tattoos behind me about the lava flow viewing. She was from Connecticut spending 6 months in Hawaii and had seen the lava and said it was impressive but she didn't know about the current status 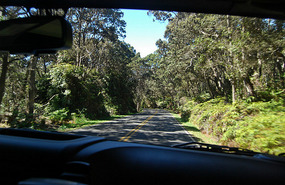 It had been difficult planning this day since we only had two days here really and there was so much to see. So since Kara appointed me cruise director, I decided to go to the Chain of Craters Road leading to the Pu'u Loa petroglyphs and sea arch next. This turned out to be quite a drive because there were stopping points to view things all along the way....and, of course, I felt compelled to stop at all - or almost all. I had a bit of compassion for Kara. First of all, when we left the rim of Kilauea crater, we began to drive down the side of the volcano through lots of lava - old lava - of different kinds. We had noticed that there was the smooth, chocolate sauce kind and the chunky, jagged kind - more like peanut brittle or caramel corn but much darker. This observation turns out to be scientifically verified - there are two major kinds of lava here 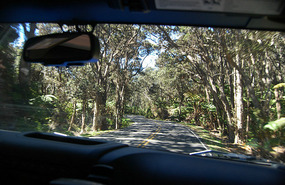 Hawai'i Volcanoes National Park
. It was quite extraordinary to drive though the landscape. I still don't really know why there are solid strips of lava and then other strips of lava with vegetation - whether the lava didn't kill it - hard to believe - or it grew on top of the lava - also hard to believe but more conceivable. Maybe the lava flow was thicker in some areas? There was a kind of cliff that crossed the volcano side about halfway down. At points you could see the top of Mauna Loa with white on the peak.

After awhile we reached the Pu'u Loa Petroglyph site. There was a short (1.4 mile round trip) walk out on top of the lava to the place where the petroglyths were. I liked walking along and seeing all the swirls of the chocolaty variety of lava. There were plants to look at and different lighting on the rock formations - a lot to see. The petroglyphs were a little disappointing at the time, although in retrospect, it was quite interesting. Most of the carvings were of circles - some up to 10-12 inches in diameter but the majority were small - more like holes dug into the rock 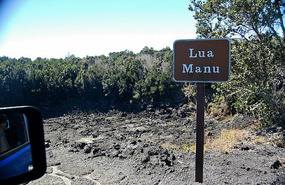 Lua Manu Crater - Hawai'i Volcanoes National Park
description
. When I got there, Kara had already been there awhile and told me that the people made the small circles to represent the birth of a child. Along with all the circles, there were obvious representations of human figures and maybe some animals. We both thought we saw turtles in a couple of the carvings. The walk back went much faster since I had already taken tons of photos on the way out.

Now we had to decide whether to drive to South Point or go the the Jagger Museum at the National Park. I had first thought that we would go to the green sand beach at South Point - which was quite a drive - first to get there and then to drive from the secondary highway to the beach. Our first real use of the Jeep. But it was already two-thirty pm. Oops, I forgot a part. Before this decision point, we drove to the end of the road to see the natural stone arch on the coast and the crashing waves against the cliffs (pali). This was nice. We were getting a bit hungry so Kara decided to buy some snacks at the snack stand - two small bags - very small - one with rice cracker mix and the other with 10 sweet potato chips, both totaling $10 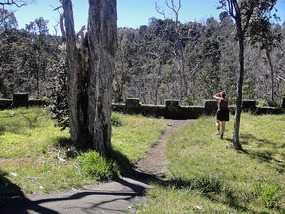 Lua Manu - Hawai'i Volcanoes National Park
description
. The guy had a captive market. Then we headed back up toward the Visitor Center.

By this time, I thought we wouldn't have enough time after the green sand beach to see the Museum and I thought the Museum would be a higher priority because we needed to learn more about volcanoes. When we were at the Visitor Center, we caught another ranger talk. This young fellow was a very good speaker and got a very loud, long ovation at the end. One of his amusing stories concerned an earlier eruption when he was a child. The lava was headed for their family home and the Coast Guard would be setting an evacuation time. His father had taken the kids out to the beach as soon as he heard that it would soon be closed. The Coast Guard then told him the closing time: the following morning - at 7:30 I think. So the next morning, the kids went back into the car so their Dad could get in a few more runs before the closure. He told the kids it was tough surfing, though, since the heat melted the wax on the board and he had to re-wax it between runs! There were some other funny stories about growing up in the line of the lava flow but I can't remember them now 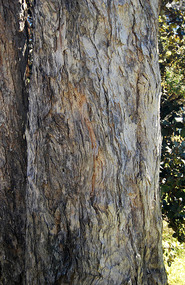 Lua Manu - Hawai'i Volcanoes National Park
. So, now as an adult, he is again in line of the lava - the new Pahoa flow.

OK, after the ranger talk, we checked out the Volcano Art Museum and Gallery - which was more of a gallery since everything was for sale - but they had a lot of nice work. We decided to go to the other gallery/museum in Volcano Village before it closed, but it was closed when we got there. We then decided to scope out Volcano Village itself and saw a few cafes, a big Ace hardware, the post office and a few other businesses in a several block radius. Having seen Volcano, we headed back to the Jagger Museum.

I think I learned some new things at the museum but it was quite small - they did have examples of the different types of lava and several examples of Pele's hair - fine strands of glass spewed out of the crater eruption - like the young woman ranger showed us on our first walk in the park. So it turned out rather anticlimactic for our second day at the park. I wanted to take another look at the eruption of Kilauea since the ranger (with surfer dude daddy) exuded such excitement about it. After at least 4 or 7 years of being a ranger there, he is still excited by seeing that eruption. He said it isn't just the smoke or steam coming from it but huge chunks of the cooled lava on the sides fall into the hot lava and create erupting fountains. That would be something to see if it happened, but we weren't there long enough because it was too cold for us and we hadn't brought warmer clothes.

We had an early night back at the house in Volcano. We had to have dinner, pack up, write postcards and finish our many alcoholic beverages - pina colada, mai tai and wine - with our cheese and cracker, olive and pineapple dinner - and oh, yes, steamed broccoli too. After that we watched a little H&G TV and Kara went to sleep while I finished up my postcards. By the time I went to bed, it was just past 11 pm. A late night for me here in Hawaii. 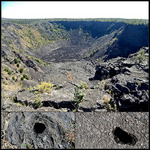 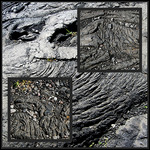 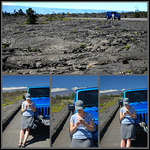 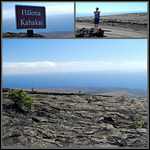 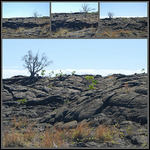 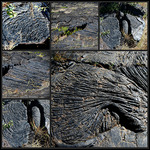 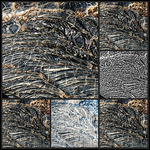 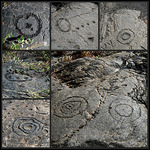 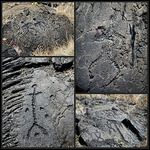 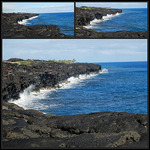 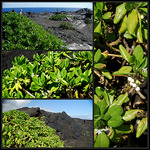 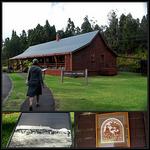