Missed opportunities on our way home

Well, I had a new plan 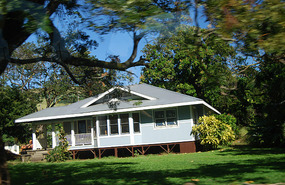 Typical house - Island of Hawaii
. If we got up really early and left early, maybe we could hit the Green Sand Beach on the way to the airport by going south rather than going through Hilo and then west. Kara agreed so we set the cell phone alarm for 7 am.

At 2:49 am, my cell phone rang. Before I could tell what it was, it stopped. It was the dentist returning my frantic call about rescheduling my appointment because I was afraid I had made it for Wednesday morning and I wouldn't have landed in Albany yet. I would have to wait to talk to them. Then sometime after 4 am, the phone rang again - this time an unidentified number. I still do not know what that might have been - maybe United telling me the flight was on time - no that would have been a text message.

After leaving the house around 8 am (not bad), we first went to the Volcano post office to mail my postcards. I had 4 large-sized ones so I was unsure of whether I needed more postage 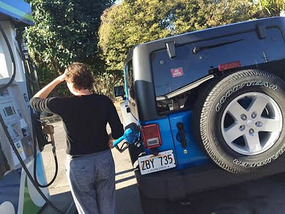 Kara filling Jeep tank with gas - Hawaii
. Here I was again in line after 3 or 4 others but butted in to ask whether I needed more postage, and, when answered in the affirmative, went back to my place in line. More chitchat. When my turn came, I gave my 60 cents while the postman counted out several sets of 4 stamps so that I ended up with 5 stamps on each card. This whole transaction took at least 15 minutes.

This is when things started to go wrong. As we turned back onto rt 11, we tried to decide which direction was the correct way. I looked at the sun and said left and off we went. After awhile I noticed a sign for rt 130 - which I remembered from yesterday. We were going in the wrong direction and had gone 20 miles out of our way - 40 round trip. By the time we got back to Volcano, it was 9:30 am. I think I tried to kid myself that we could still go to the green sand beach but I probably knew the side trip was now doomed - through my stupidity. I think I am now having trouble with east and west - not just left and right 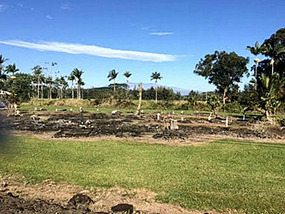 Cemetery - Big Island
. I used to be good with the cardinal directions. We decided we would reconsider once we knew how long it would take us to get to the airport from South Point.

On the way, I remembered Ola, our kayaking tour guide, telling us about the Portuguese sweet bread and so now I was also obsessing about pastry. Once we stopped, I knew green sand beaches were out. We bought three different doughnuts - one with passionfruit icing, an orange mango-flavored one, and a chocolate filled one for Kara. We later shared the mango one - it wasn't as good as the others. We went out under a gazebo to eat our doughnuts. There was a lovely strong breeze. It almost compensated...

We continued on the drive - passing familiar spots - the turn-off to South Point, Annie's Restaurant, the kayak tour place, and we were well on our way to Kona. Kara began looking for a place to picnic before we got to the airport because now we had some spare time 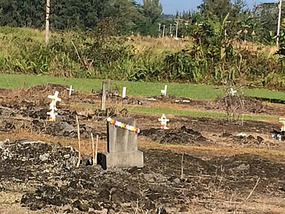 Cemetery - Big Island
. I thought it would be nice to be by the ocean. Kona seemed like the easiest - most familiar - way to get there. I thought I remembered a park-like area beyond the commercial strip by the Marriott. We drove down. Kara luckily found a great parking space and we walked past a few shops before settling on the wall in back of the Royal Summer Palace for our picnic spot. Kara quickly spotted some yellow and black fish in the clear waters below us. There was a blue-purplish fish - probably a parrot fish - there too. We ate our cheese and crackers and finished up the apple we brought from our Volcano rental.

Next off to the airport.   Filled up the tank. I forgot to mention that when we got gas on the east side of the island, it was only about $3.10 per gallon. Now we were back up to $3.39 (luckily not the $3.69 next to the Hilton). We dropped the car off, got a shuttle to the open air airport, checked in and got a surprise: We had been upgraded to first class on the LA to Newark leg of the trip 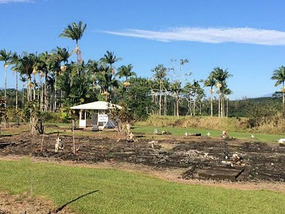 Cemetery - Big Island
. Turns out these late flights were quite empty to the point that the flight attendant suggested we could move to the back and stretch out if we wanted. Ah, we get to first class and then go back - voluntarily - no chance! So far the flights have not been memorable. We had a snack during our short layover in LA at a Mexican fast food place in a food court. Most everything was closing up as it approached 11 pm.

Before boarding, Kara and I could overhear a fellow passenger in the gate area on his cell phone complaining that he wanted to switch flights because he "needed a bed."  Apparently, he thought the flight had beds in first class and was sorely disappointed to find that this flight to Newark, unlike the one to JFK, did not. We heard him going on and on about how he needed a bed, he needed rest, he couldn't go to work without sleeping in a bed. Next as I am boarding and enter the plane, this man is coming up the aisle toward the front against the flow of traffic - holding everyone up - and asking the flight attendant whether the points allotted for this flight are different from the ones for the JFK flight

Punalu'u Bake Shop - Hawai'i
description
. She said she didn't know anything about points. He finally settled back down in his seat kiddycorner from Kara's and she notices that he has his shoeless foot resting on the armrest of the man across from her. This is the kind of person you would rather not meet on your flight...as entertaining as he was.

Now I am sitting in my first class seat - ready to put away the computer and try to sleep a bit more. I must have slept because I was definitely jolted when the flight attendant made an announcement and put on the lights so we could acclimate ourselves before landing in Newark. We only had a bit more than an hour to get to a different terminal via a shuttle and make our connection to Albany. I convinced the staff to allow Kara to board in my category because we would have had trouble stowing her carry-on otherwise - the bins are full. I checked two small bags - under both our names. Nothing much happened. It was a bit of a downer to look down once we hit the East Coast to see the brown & white landscape.

It was a lovely trip - Hawaii is so beautiful and pleasant - with so much to see and do.... 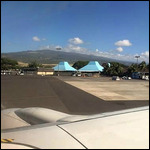