Intrepid trip notes: You can start the day with an independent visit to Vientiane's vibrant
and colourful morning market, before an included afternoon flight to
Luang Prabang. Once the heart and soul of the ancient Lao Kingdom (Lan
Xang) and designated a World Heritage site in 1995, Luang Prabang is
endowed with a legacy of historic red-roofed temples and
French-Indochinese architecture, not to mention some of the country's
most refined cuisine, a multi-ethnic population and rich culture. The
city and its people retain a refined, yet relaxed, air and it’s a
wonderful place to wander the side streets and dusty lanes and seemingly
step back into another era. In the late afternoon, you’ll visit the
National Museum at the former Royal Palace, a building that combines
French colonial and traditional Lao architecture. The collection of
treasures and artefacts reflects the richness of Lao culture, dating
from the days of the early kings right through to the last sovereign,
who was deposed in 1975. A large hill called Mt Phu Si dominates Luang
Prabang's skyline, topped by a glittering golden stupa. You’ll climb the
328 zig-zag steps up to the sacred gilded stupa and big drum of the Phu
Si Temple for a panoramic view of Luang Prabang and its surrounds at
sunset.

Notes: Please note that the flight time today is subject to change, depending on availability 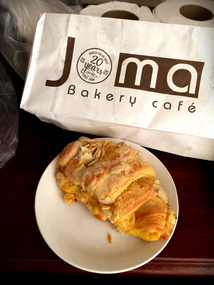 Croissant - Vientiane Lao PDR
description
. Your local guide will advise you of the pick-up time from your hotel. On arrival in Luang Prabang you’ll be met and transferred to your hotel.


I woke up after 4 am today. I tried to go back to sleep but then I realized I hadn't blogged yesterday so I got up and did that. We don't have much time this morning before being picked up at 10 am for the flight to Luang Prabang. I will go to breakfast, pack up and try to find the Jo Ma Bakery for another croissant before we leave. And maybe edit some photos from yesterday.

so I succeeded in putting up a bunch of photos from yesterday on facebook, walking to Jo Ma Cafe and buying a cappuccino and almond custard croissant quite unlike any I have eaten before, but very filling so that I certainly won't need lunch. I am pretty much packed except for squeezing a few last things into my daypack.

I made an entry prior to leaving for the airport this morning. After packing and repacking so that I could check my rolling duffle, I went downstairs early but everyone was already there waiting. I was still early. We went to the airport where our domestic terminal was in a temporary building. They had rows and rows of blue padded chairs. The boarding pass said boarding started at 11 am. I mentioned to Pip that boarding was scheduled for 11 because it was already 11:05 and seconds afterward, people began lining up 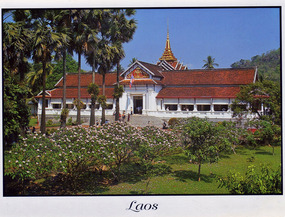 Royal Palace Museum - Luang Prabang Lao PDR
. We walked down some stairs, out onto the tarmac, around a corner and out to the plane. Lao airlines has frangipani on their tail fins. Very nice.

The flight was only a half hour. We got some water and a dried fruit mix packet. Most of the fruits tasted the same but it was still OK. We were met by our new guide Khien who is 64 years old. His English was sometimes hard to understand but he seemed quite knowledgeable. We only have him for the city tour today and he gave us an unsubtle message that he would like more time. We checked into our new hotel (MyLaoHome Boutique Hotel) and had time for lunch before meeting Khien at 2 pm for our city tour. I had a chance to eat the second of the Spanish cheeses for lunch. After the dried fruit mix and my croissant, I really didn't need anything more.

Our first stop on the tour was the former royal palace that is now a national museum. There was a sanctuary on the grounds of the royal palace which is situated on the banks of the Mekong so that the King could go down and fish 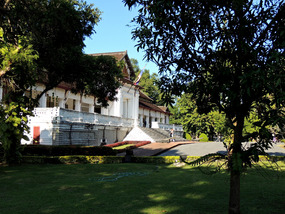 Royal Palace Museum - Luang Prabang Lao PDR
. We saw the meeting room at the entrance to the house, then a series of bedrooms, then some other rooms, including a dining room and rooms I couldn't really identify by any function since they were filled with exhibits. One room had a collection of gifts from other countries: USA, boomerang from Australia, Chinese porcelains, beautiful silverwork from Vietnam and Cambodia, some small things from the former Soviet Union and Poland. The lay-out of the house was interesting because there was a wide corridor that went around the perimeter of the house. It had many windows but most were closed at this time. Some rooms were decorated with cut glass mosaics that were really fun, especially the palm trees. There were a few large portraits of the royal family including the eldest son. There are three surviving children and they all live in France now. We next went to see the garage with the King's car collection. There were several Lincoln- Continentals - at least one of which was a gift from the US. So was the Edsel 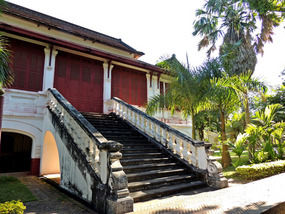 Royal Palace Museum - Luang Prabang Lao PDR
. Then there was a Citroen and a Toyota 4x4 given by Japan. Interesting. I had no idea countries gave Kings or other heads of state actual cars! I only have photos from the grounds and the garage since no photos were allowed in the former palace interior.

From the Royal Palace we walked east I guess and visited several temples. I have the name of the first two written down by Khien but never learned the name of the 3rd or the 4th which was on the lower slopes of the Mt Phu Si hill and housed a functioning monastery. Some of it looked rather wrecked. We crossed the main street and started climbing the 323 steps to the stupa on top of the hill. Khien said he would only climb half-way because he was old, but he did quite well. I trailed along behind him and Pip and Andrew...who was planning how he would run up the steps tomorrow morning. After Khien stopped, I told Andrew and Pip to go at their own paces because I would be slower. I stopped to take photos several times 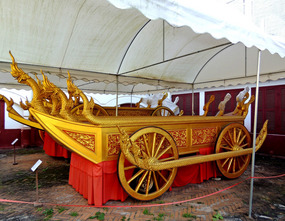 Royal Palace Museum - Luang Prabang Lao PDR
. My coolpix was out of battery-power so I had to switch back to the Lumix. If I were alone, I would have taken a lot more photos because the scene was pretty spectacular. The stairway with its twists and turns and shrines along the way was magical. This is exactly the way I thought Mt Fuji would be....and wasn't   The top of the hill right under the stupa was mobbed with people doing selfies and waiting for the sunset. Pip and Andrew were sitting just below the turning point and had no desire to stick around the crowded peak to wait for the sunset. I was fine with that because I was worried that it would be dark after the sunset. We descended by steps going down the other side and it seemed much faster. We got to the bottom just as my quads were beginning to give out.

We walked for awhile until we pretty much ran out of town and turned back. At this point we started to look for food. Pip and Andrew were also looking for a cooking class. We stopped to eat at the Bamboo Tree restaurant that ran a cooking class 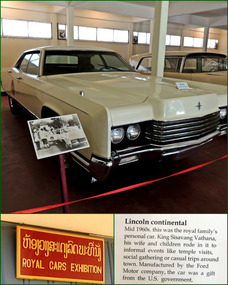 Royal Palace Museum - Luang Prabang Lao PDR
. i ordered the Lucky Fresh with sticky rice, soup, chicken salad and spring rolls. It was very good. I had a ginger-lime soda with a big chunk of ginger decorating the rim. I saved it...for what I am not quite sure (but I still have it now in early February). I was the last to finish eating. The restaurant gave us complimentary cocktails and then a complimentary shot of rice whiskey. After all of this, we walked and walked down the main streets past shops and restaurants until we came again to the night market which itself went on for blocks and blocks until you though it couldn't any more but did. I forgot to mention that Andrew bought a crepe filled with nutella and mango before we started out on the main street walk. Eventually we walked past the barriier marking the end of the market and soon found the street with our hotel.

When I got back to my room I found a puddle of water on the floor. Apparently the refrigerator had gotten unplugged and defrosted - thus creating the leak. One of the young men at reception fixed the problem. I unpacked my daypack and got out the netbook, phone charger because the phone was dead, and started to upload my photos. That is done. My blogging is pretty much done. I feel pretty sleepy and don't think I will get to editing the photos. Still no internet here.

Our guide today mentioned the five requisites of a temple: the sanctuary, drum tower, monk residence, stupa(s), not library but Buddha tree - the banyan.