Intrepid trip notes: Travel with your local guide approximately 25 kilometres along the Mekong River to the Pak Ou Caves 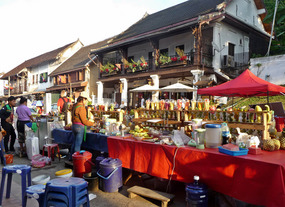 Morning market - Luang Prabang Lao PDR
. On the way, you’ll have the opportunity to stop at the small village of Ban Xang Hai, which means Jar-Maker Village, so named because this used to be the local cottage industry here. Nowadays, the jars come from elsewhere and the village residents fill them with fiery lao lao (the local rice wine). The Pak Ou Caves consist of two sacred limestone caverns filled with Buddha images of all styles and sizes, brought by devoted villagers over the centuries. The lower cave, known as Tham Ting, is entered from the river by a series of steps and can easily be seen in daylight. The higher cave, Tham Phum, is deeper and requires a torch for viewing. You will enjoy a picnic lunch before returning to Luang Prabang, stopping at the silk-weaving village of Ban Phanom on the way. Back in Luang Prabang, maybe sip an evening drink on the veranda of the wonderful colonial-style Villa Santi Hotel. It’s a nice way to spoil yourself and round off the evening.
Included Activities

I woke up at 3:37 am today but managed to stay in bed until 5:17. I must have slept a little. I did some reorganizing and managed to get into facebook but it is too slow to do much more than respond to a few posts. I will try to edit my photos from yesterday, shower and wash my hair before breakfast. We are off for our boat trip to the cave at 9 am. 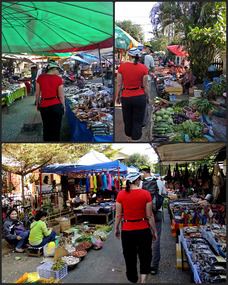 Morning market - Luang Prabang Lao PDR
description
. It may have been
later when I got to breakfast. I poured some really dark (but OK)
coffee and some juice. I went back and got some fried eggs, noodles,
and sauteed mushrooms. There may have been a 4th item. I was almost
finished when Pip joined me and then Andrew. Pip had some yogurt so I
asked her where she found it and got myself some. It tasted sweet and
sort of fruity but had nothing in it that I could see. After breakfast I
organized myself for the day trip but did forget my flashlight and
found that I had misplaced or lost my full tube of sunscreen. It has proven
difficult so far to find a replacement.

We met our newest guide
Kit at 9 am in the lobby. He walked us through the Morning Market and
down to the Mekong where we
caught a water-taxi. It was probably pre-arranged since there were only the
three of us plus Kit. The trip takes an hour and a half and is very
pleasant with the cool breeze and the scenery. The Mekong is a muddy
brown but there are pointy mountains covered in greenery and blue pointy
mountains in the distance. There is a constant traffic of water taxis
and other boats plus fishermen, temples and villas on the shore.

Our first stop was Ban Xang Hai village where we sampled some of the local rice alcohol
products. There was a lovely purple rice wine made from purple sticky
rice; then a light brown wine made from white sticky rice 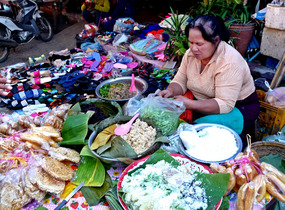 Morning market - Luang Prabang Lao PDR
. Finanlly, we
tried the rice whiskey which is made from the white rice wine. There
was a ball of yeast with herbs that is added to the boiled rice to start
the wine fermenting. It only takes a week to make the rice wine. I
think it took an extra week to distill the whiskey. Then we walked
through the village where we saw lots of scarves and other woven
products. Kit said they were mostly woven here and would be less
expensive than at the Luang Prabang night market since it would take the
villagers a half hour to go to Luang Prabang. I wasn't ready to buy
anything but did see some nice scarves. Andrew and Pip were not buying
either. We visited the village temple grounds and then left for the
cave. (The order of my photos got messed up when I uploaded them but
I don't feel like correcting the order now.)

The Pak Ou cave temples are in a huge limestone cliff. The lower
cave is accessible by a few short flights of stairs. It is pretty
shallow and there are lots of Buddha statues there 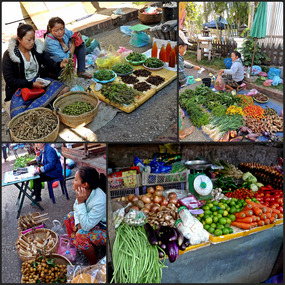 Morning market - Luang Prabang Lao PDR
. People were praying
even though there wasn't much space and there were a lot of people milling around.
Kit said that people come here for the Lao New Year's to cleanse
themselves by praying to Buddha. The three of us proceeded to the upper
cave by some 200 plus steps. Kit stayed behind. I got exhausted by
the time I got to the top and was shamed by a small boy - not more than 4
I would guess - who tackled the stairs with gusto. He raced up even
though his little legs really had to extend to get to the next step. He
would sigh loudly and rest every once in awhile. Pip and Andrew were waiting
at the top outside the entrance. I told them that I didn't think Kit
was coming up. I went inside and wandered around in the dark and took
some photos without my flash on the coolpix. I did see some of the many
Buddha statues in the photos - somewhat blurry though. Going down was a
lot easier.

After the caves, we went across the Mekong to a very
nice restaurant with a view of the caves and the river 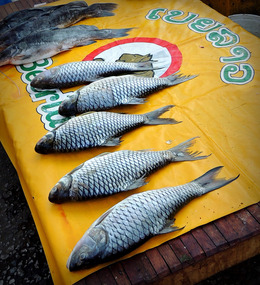 Morning market - Luang Prabang Lao PDR
. Our lunch was
included for today. I had noodles with vegetables. It was good - but I
hadn't expected wide noodles. I also had a nice fresh lime juice. The
ladies' room was quite exceptionally clean, well-supplied and
well-plumbed for someplace so far away but Laos is much more touristy
than I would have suspected, especially here in Luang Prabang. While talking to Andrew,
Kit mentioned his education as a novice and monk (4 Plus 2 years) and how
he leads adventure trips, like white -water kayaking, hiking and biking
here in Laos. He is 34 years old - looks about 10. He showed us
photos of his 2-month-old baby boy and nine-year-old daughter. He was
sweet. He wore a Clint Eastwood hat. He asked Andrew whether he was
cold because Andrew had on a short-sleeved shirt and Kit had on a
long-sleeved sweater. I had on a long-sleeved shirt but only for sun protection,
not warmth.

Our trip back to Luang Prabang was
anticipated to be a sleepy one but Andrew ended up talking to Kit for
most of the ride. I took a few more photos. I think the Lumix is close
to death. It keeps taking blurry photos. I may get a half dozen OK
ones but then they go blurry again. None of them were any good really.

When we got back to the hotel,
Kit arranged our transfers for the end of the trip. I have one more day
here so I have two free days coming up. Andrew and Pip only have
one 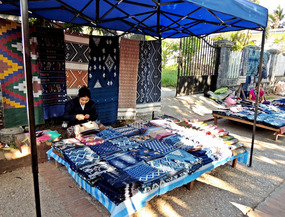 Morning market - Luang Prabang Lao PDR
. We went our separate ways to our rooms and subsequent activities.
I spent time uploading my photos and then was ready to go out around 4
pm. The first thing I did was buy 5 more postcards and I got 5 stamps
to go with them. The stamps were 4x the price of the cards. Then I
checked the tourist info building but there wasn't much there and no
person. I tried a few shops for sunscreen with no luck so far. I
walked into a few shops just to get an idea of what was around. I did
find a handicraft center shop that offers handicraft courses. I think I
may take one. I will have to arrange it, if possible, tomorrow
morning. Then I went in search of dinner. Oh, I almost forgot, my
other priority - I got a crepe. I tried a coconut-mango one and it was
excellent.

I had dinner at the Viewpoint Cafe. I walked around for quite awhile
trying to find somewhere interesting. I followed the Mekong around to the end of the main street where I saw some restaurants overlooking the river 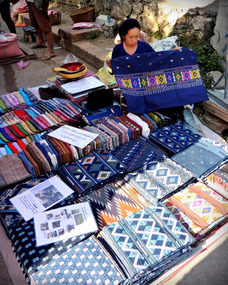 Morning market - Luang Prabang Lao PDR
. They seemed nice.
I had that recommendation to have a cocktail overlooking the river in the back of my mind.
I eventually picked a place while I was walking back that turned out perfect.
I had a gin and tonic and a light meal as darkness descending and the very
pretty lantern lights of Luang Prabang came on. On the way back to the hotel,
I took a few photos of night scenes in Luang Prabang. 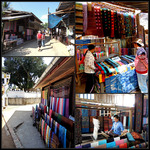 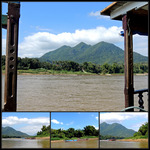 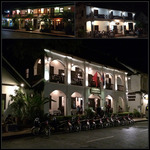 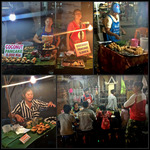