Intrepid trip notes: Luang Prabang is easily explored on foot, and today is free for you to take a closer look at some of the beautiful temples, try one of the many restaurants along the banks of the Mekong River, or simply soak up the enchanting atmosphere 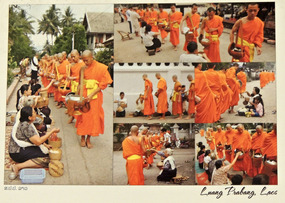 Alms giving to Monks - Luang Prabang Lao PDR
description
. It’s worth getting up in the misty early morning to view the procession of saffron-robed monks on their daily outing collecting alms, a practice that dates back centuries. The people of the town wait out the front of their houses with food for the monks to collect and take back to the temple. It is done early, as the monks cannot eat anything after midday. By giving food to a monk you ‘het bon’ or make merit, which should augur well for your next life. Make sure you don't miss Wat Xieng Thong, the most enchanting of Laos’ monasteries. Inside you'll find monks eager to practice their English with you. Alternatively, you may want to visit the beautiful Kuang Si Falls, 32 kilometres south of town. This picturesque, multi-level cascade that offers fantastically blue pools that are perfect for a mid-afternoon dip. This evening perhaps explore the popular night bazaar, or maybe join your fellow travellers for a celebratory dinner.
Optional ActivitiesLuang Prabang -
Wat Xieng Thong - USD2
I woke up a bit later this morning but was not as bright-eyed and bushy-tailed as past mornings 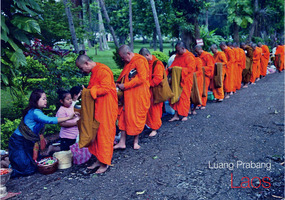 Alms giving to Monks -Luang Prabang Lao PDR
description
. I tried to go back to sleep but gave up around 4:45 am and decided to go out to see the monks. It is really dark at that time of the morning and I had to open a door that squeaked to get out into the street. I headed in the direction of the main shopping area and was stopped before I got too far along by a woman vendor. She showed me a pot of sticky rice and a bunch of what looked like little potato chip bags. She wanted 20,000 kip for the lot and ushered me back in the direction I had come because she said that was where the monks came. She then got me a woven bamboo mat and spread it out. I wish she had been able to give me more instructions. I sat there waiting and after quite a long time, I was joined by three young women, one from Portugal living in Scotland. They had their rice and chip bags and mat. After another lengthy wait, another mat was spread out for 2 middle-aged Asian ladies and their male companion. He took the photos. They sat on their heels on their mats ready to offer food.

When the monks arrived - unexpectedly for me from the opposite direction, I was quite flustered 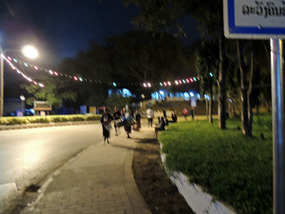 Waitig for the Monks - 5 am -Luang Prabang Lao PDR
. My main object was to take phtotos of them but I was happy to be able to offer them some food. Only I didn't know how to do it. After I had given away all but one of the chips, with the monks refusing the rice container, someone told me to make balls with the rice and put one in each of the monks dishes. A man then told me to make them smaller. Since I had a late start, all the monks had gone and I was still left with half the rice. My vendor lady came and took back the baskets and the mat. Afterwards, I did see more monks passing and getting food. I was able to take some long-distance photos. It was an interesting experience. I wonder what the monks make of all the tourists.

I went back to my hotel to get my debit card so I could replenish my supply of kip since I was pretty much out. The first machine was out of money I guess, but the second seemed to be working. I then went to the morning market, took a few photos, made a few inquiries about prices and bought a Lao traditional skirt from a lovely young woman who said she embroidered it and wove the band at the bottom 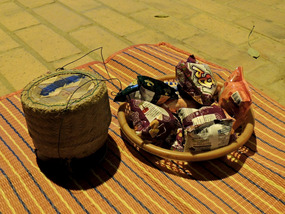 Alms giving to Monks -Luang Prabang Lao PDR
description
. I wonder. After that I came back to the hotel for breakfast - it was a bit past 7 am. I am in bed playing with the computer and trying to regain warmth since it was a lot chillier this morning. Maybe it will warm up. I want to go to the craft center and try to book a batik-dying class. We'll see.

So I put on my jeans, long-sleeve turtleneck shirt, and down jacket and went out again. I headed down our street to the Mekong. I walked along the the roadside and had some nice views of the river. There were quite a few cafes and restaurants on the river side of the street but mostly on the downscale. I found a sign for the National Museum but the gate was closed. I wonder if it is open. After the Museum, the character of the neighborhood changed to more upscale until I passed the Mekong Riverside Hotel which seems like the poshest. The restaurant at which I ate last night is called the Viewpoint and is kitty-corner to the Riverside. I sort of wanted to continue along the Little Khan River but by then I was boiling 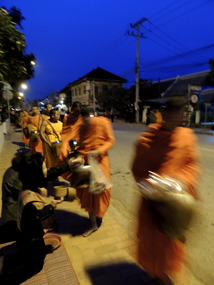 Alms giving to Monks -Luang Prabang Lao PDR
description
. I had taken off my jacket and that helped a bit.

I headed down the main street toward the craft shop and decided not to take any more photos but I had to take one of the main temple in the daylight. It was quite a ways to the craft shop. I thought I had passed it when I bumped into it. I booked a half-day weaving class for tomorrow morning. I would have preferred the batik-dying but the Hmong women have a week off to celebrate a festival. After accomplishing that goal, I thought about having a coffee and chilling for awhile. I had already stripped off the turtleneck at this point, but I was still hot and decided to get back to my room to change. On the way I stopped to buy more stamps and a few postcards plus I asked about sunscreen and the shop person pointed on the counter - they were right in front of me. A bit pricey but they have a cornered market. Now I am back at the hotel - it is almost noon - and I have uploaded my second set of photos for the day.
Somehow I decided to take a nap. Maybe because I felt so exhausted walking back to the hotel. I woke up once or twice, decided it wasn't time to get up and then got up at 2:30 pm or so. I headed out to where I thought the National Museum was. I must have walked past it by only looking at the Mekong. I really don't know how that happened. After I was sure that I must have passed it, I began to look for somewhere to have lunch overlooking the river 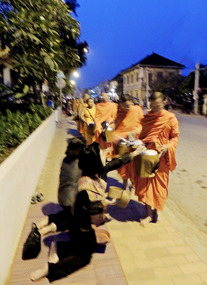 Alms giving to Monks -Luang Prabang Lao PDR
. I finally found a place that looked nice and had people at it - only one couple but that was reassuring. It turned out to be perfect. I had a fantastic view of the river and my meal was quite good - an odd combination perhaps - but it worked fine: fruit shake with yogurt, a shrimp, cashew and Chinese mushroom stir fry with sticky rice in one of those very cute woven bamboo baskets. I lingered over lunch as I wrote out 9 postcards, stamped and addressed them. Wow - I am so proud of myself. The restaurant was the View Khiem Khong Restaurant.

Now I kept walking the circuit to get back to the hotel, but I must have wanted something, or else I just wanted to explore one of the side streets. Unfortunately, I picked the one we took when we went for the water taxi ride on the Mekong. It was fine. I wasn't very far from the hotel. I took a few photos of a temple on my way to the main street and then bought a Lao beer at the free concert area where I listened to a musical ensemble for a bit. I then decided my next goal should be a nutella-mango crepe for dinner. If I had realized how far I had to walk through the night market to get there, I might have left that task for tomorrow, but I persevered and finally got to my destination. The crepe vendor recognized me and put out a stool for me, which I left to hop up and get some photos of her making my crepe. It was very good and I managed to finish it without tripping or dropping it as I made my way through the hordes of tourists strolling through the night market. I then checked out the performance area but the show seemed to be in Lao so I gave up. It was already 7 pm. I headed for my room, but had to go out to get the Lao beer opened in the lobby. Now time for my photo uploading. I tried to get on the wi-fi but I couldn't send any photos from the i-phone and I haven't been able to search Josh's facebook so I can send him a condolence message.