Off to Bangkok for New Intrepid Tour 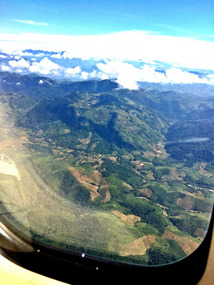 Flight leaving Luang Prabang for Bangkok
. Thailand's bustling capital, Bangkok is famous for its tuk tuks, khlong boats and street vendors serving up delicious Thai food. Your adventure begins with a welcome meeting at 6pm on Day 1. Please look for a note in the hotel lobby or ask the hotel reception where it will take place, and have your insurance details and next of kin information ready for collection. Bangkok has so much to offer those with time to explore, so perhaps arrive a day or so early and take a riverboat to Chinatown and explore the crowded streets, uncover the magnificent Grand Palace and the Temple of the Emerald Buddha, wander down the tourist mecca of Khao San Road, or indulge in some Thai massage. After the meeting tonight perhaps gather your fellow travellers together and tuck into some into world famous street food.
I only have a half hour to do up my notes for today.

I haven't been sleeping that well lately. I also seem to have picked up some respiratory affliction or allergy, but I doubt allergy. I have a tickle in my throat that makes me cough now and then. I used to bring cough drops but I stopped to lighten my load. In any case, I got up around 6 am, played with some photo editing, packed up more. Then I tried to take my shower so I could finish up packing - only to find out that the water never got beyond a slight hint of warmth to the cold water so I gave up that idea. I went down to breakfast around 8 am 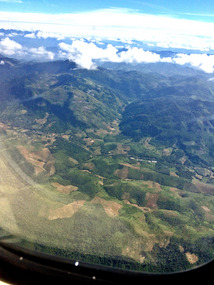 Flight leaving Luang Prabang for Bangkok
. I asked about my transfer and the reception person said I should come down at 10:20 and maybe someone would be there to pick me up and take me to the airport. I went down a little early and the person was there!!

I checked in and went off to the gate. I didn't try to change my Laotian money into Thai money, but I should have, I guess, since they don't change Laotian or Indonesian money at the Bangkok airport. I did manage to change some New Zealand dollars that I most have been stashing for at least 10 years. I found them when I was cleaning or putting together Theo's foreign coin and currency collection. Bangkok Airlines served a nice lunch and were pushing wine. The people behind me commented that rarely do flight attendants keep offering wine to passengers.

Landing was very bumpy on the tarmac but after that all went pretty smoothly. There was a family on the shuttle from airplane to terminal and the father told his young daughters that it was time for them to do their racewalking.   I don't know if that influenced the other passengers, but I have never seen people rush so fast to passport control. Maybe they were all expecting long lines - typical for Bangkok airport. I don't know. When I picked up my checked bag, I went out and started looking for my transport. I walked up and down all the signs - getting close and peering at them 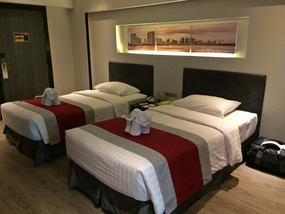 My room - Nuovo City Hotel - Bangkok Thailand
. None for me. I asked someone where else I might find a tour leader waiting and she sent me from door 6 to 10. Still no one. Once I came back, a woman with a clipboard with my name on it found me and had me sit and wait for someone. A young man came some minutes later and led me to a taxi. The drive to the hotel was quite long and we went through many different kinds of neighborhoods, from warehouses, to grimy storefronts, to imposing buildings with gardens and blue & white bunting (did someone in the royal family die recently? Yes, the King died in October.). There were modern business districts with concrete old-fashioned buildlings, one even had a mansard roof. Finally we came to a sort of busy shopping area and the taxi turned onto a narrow street and doors were opened for me, bags snatched. I was at my hotel.

I was checked in and informed that my roommate would be arriving later and that we had a meeting a 6 pm. Now I only have 15 minutes and probably should get there a bit early 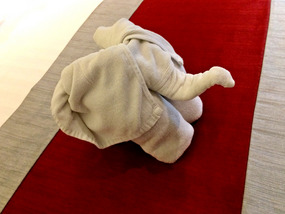 My room - Nuovo City Hotel - Bangkok Thailand
. So I will now shut down.

While waiting in the lobby, I saw a few groups of people, then I saw a young Thai woman in an Intrepid shirt. It seems that there are at least 2 different Intepid tours starting and some other one. Tai or Rabbit, or something like that, got us into a meeting room. First there were 4 of us, then we were joined by a couple. So we have Simon from Switzerland, Alex from England - she will be my roommate after tonight, Margaret and Frank from Ireland but living in London, and Shane from Australia. Most of the group is doing more than one tour and Margaret and Frank are out until January as is Alex who started mid-October. After the formalities of getting insurance info, Tai had us introduce ourselves. Tai gave us the lowdown on the trip and then said she booked a table for us at a restaurant in the neighborhood.

My room - Nuovo City Hotel - Bangkok Thailand
. There are tons of vendors and lots of bars and food carts. I had pad thai with squid and a Chang beer. Shane warned me it was like Budweiser and I think it probably was. I don't think I will order it again. Some of the other had Leo or Singha beer and Margaret had some sort of fruit cocktail. We lingered over dinner while music came from next door Bob Dylan and some blues songs I would have sworn were sung by Americans. Tai excused herself to do paperwork and we had more drinks - I didnt and Alex didn't - and then we waited for the check. Alex said she was going back to the hotel by a circuitous route and I tagged along. So did Shane & Simon. We stopped for more drinks on the street and watched the action. It was bustling and noisy. Then Alex and I came back. It was 10:30 pm- way past my bedtime.