Intrepid trip notes: Begin the day with a river cruise down the Chao Phraya River to explore the famous ‘khlongs’ (canals) (approximately 1 hour) 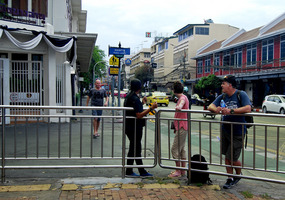 Off to Khlong boat (canal) tour - Bangkok Thailand
description
. Life along these canals seems a world away from the chaotic streets of the capital. Pay a visit to Wat Pho, one of the ‘trinity’ of Bangkok temples, with a 46-metre long gold plated Buddha reclining inside. Even the feet of this statue are incredible, three metres long and intricately decorated with mother of pearl. The temple grounds are equally fascinating, filled with beautifully decorated stupas, halls, and shrines. No trip to Thailand is complete without an overnight train journey. This evening you’ll head south to Surat Thani on an overnight train journey, accommodated in air-conditioned sleeping berths (approximately 12 hours). Multi share compartments have bunk beds, with sheets and pillow provided. Your baggage travels in the carriage with you. There is a food and drink service available on board. Included Activities
Optional Activities


There are shared hotel rooms available this afternoon if you would
like to freshen up or organise your luggage. One room will be shared
between up to 4 members of the group.


I got up shortly after 6 am and packed up, had some hot tea, and played with my electronic devices 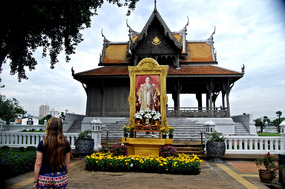 Alex walking to boat pier - Bangkok Thailand
. Then I went out to join Alex for breakfast. We were also joined by Shane and then Margaret and Frank. Simon was missing in action - Shane said that the four of them (tour members except for Alex and me) were out partying until 2 am and it was all Simon's fault.

Alex and I went back to the hotel to meet up with Tai - Rabbit at 9am. Tai said she would change my Lao money into Thai baht. Once that is done I may not have to go to an ATM to get more money.

With most of the group assembled, we waited for Simon. Somehow we wondered if he would be able to make it with all the partying last night. No Simon. Finally Tai got a key for his room and went up to see what was what. Simon came down in a bit and apologized but said he really needed to sleep and begged off on the morning tour. He said he woke up somewhere in a large building with no pants or shoes (and maybe no money). He doesn't remember what happened. Apparently he went out again after the 4 had come back to the hotel 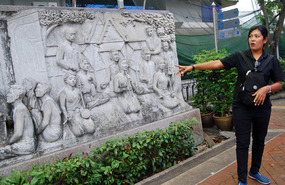 So we then set off without Simon. I had to stop and get water because I had packed mine in my tote bag and took my daypack instead. Thus no water. Then Frank ran back to the hotel to get his wallet. When he came back, he said that Margaret had had it with her the whole time. Off to a good start. From then on things seemed to go more smoothly. We walked to a nearby park where there were docks for the long-tailed boats. We had a decorated one all to ourselves. It was a bit tricky to get on, especially with a skirt. The water was a bit choppy so we didn't get to go down any smaller canals. We were on the Chao Phraya River and then went on Bangkoknoi Canal, a smaller channel. There were some interesting buildings, houses - some nice and some rickety. There were apartment blocks with clothes hanging and a large hospital. I was still impressed by the flowers and plants people had growing on their porches or balconies. Since it was cloudy, the photos are not so great - everything looks dull 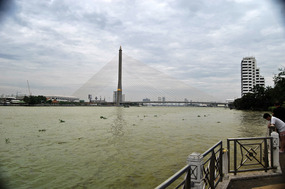 Chao Phraya - Bangkok Thailand
. Except the water, which is a strange green color. I think this was due to my polarizing lens: it had fallen off and some woman pointed it out to me, I picked it up and replaced it, but it hasn't seemed quite right since then.

From another dock, we walked to the Wat Pho Temple with the large reclining Buddha. That was probably the most striking single sight but the entire complex of richly decorated and gilded buildings is quite impressive. This trip I especially noticed the statues of what looked like old-time Japanese samurai warriors - must be Thai warriors. There were huge mobs of tourists. Tai apologized that they were all in my way as I was trying to take photos. It was rather difficult.

Before and after the Wat Pho Temple, we walked past the Grand Palace where many people were mourning and celebrating the birthday of the recently departed King Bhumibol Adulyadej. There were all kinds of free presents for the Thai people and Tai shared some papaya salad and free water with us 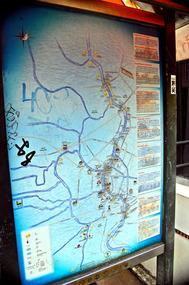 Bangkok Thailand
. She offered to get us some other things too but the lines were very long. People were dressed in black to express their sorrow at the King's death. There were a lot of people walking and congregating around various exhibits. There were lots of flowers and boy scouts and military men.

For the rest of our free afternoon, Alex and I went to get Thai massages at a place that she had been to several times before. Just as we were leaving, Simon was starting. The massage was different from ones I have had before. Alex and I were in a room with 4 or 5 mats. We got our massages with our clothes on...no oil or lotion but lots of pressure, twisting and a bit of pounding, kneading. It felt really good. We made a quick stop at the 7-11 for dinner snacks for the train ride. It is now getting close to six so I will wrap this up, check on facebook and finish my packing up.

I think I may have written about the train ride and getting on already on the next day's entry. If not - the station was big, there was chanting , a special section for monks to sit and a tribute to the late King since it was his birthday or maybe it was left over from his death. We see lots of bunting with black & white streamers on walls, buildings and other things. 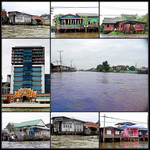 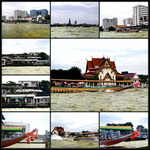 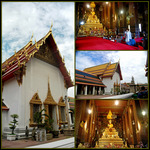 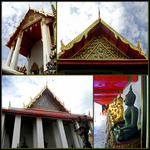 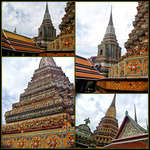