Arrive into Surat Thani in the morning and then travel by minivan
to Khao Sok (approximately 2.5 hours). Set amid hectares of thick
jungle, waterfalls, limestone cliffs and topped off with an
island-studded lake, the national park of Khao Sok is a nature lover's
paradise. Here you’ll have free time to explore one of the oldest
rainforest in the world. Walk along the dirt trails that snake through
the quiet park, looking out for wildlife as you head for rivers and
waterfalls. The park is home to boar, gaur, gibbons, deer, wild
elephants, and even the occasional tiger. The flora is also top-notch,
with the rare Rafflesia Kerri, one of the world’s largest flowers, only
found in Thailand here. There are longer hiking trails also available
and in the rainy season there's an option to take to the water in inner
tubes and float down the river through the rainforest. Spend a night in a
rustic hut amid ancient gnarled rainforest trees. 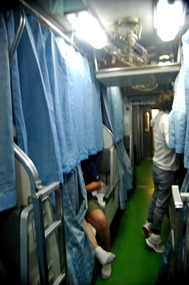 Train arrives at Surat Thani - South Thailand
. Alex and I got downstairs a bit before 6. It turns out that we were not scheduled to leave until 6:20 so we had a bit of a wait. Then we loaded or were loaded into a minivan for the ride to the train station. Back out came the bags and we took our stuff to the train station waiting room. This was like a min-Grand Central Station in New York City- but quite new I think. There was chanting on the PA system and an exhibit of photographs from the King's reign interspersed with photoos of Thais holding their own photos of him with reverence. It was quite an impressive display. At one end of the concourse, there was an altar with flowers and people made obeisances there. Around the perimeter of the concourse were shops with more on the balcony above. I followed some of the others and went upstairs where I found a cafe with an almond chocolate croissant which I didn't need but bought anyway. I had enough snacks from the 7-11 in anticipation of the train ride already. Our train wasn't until 7:30 so we waited a bit more before Tai-Rabbit led us to our train car.

The layout of the sleeping car was double seats on each side of the aisle with a fold-down bed above. We sat in the seats and tried to arrange our big bags under the seats if they fit or on the seats with us, as in the case of Alex's big bag. Since she is traveling for such a long time, she had a big bag and some overflow and one very heavy daypack 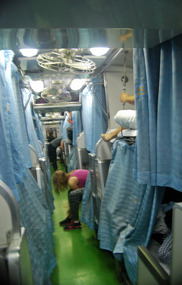 Train arrives at Surat Thani - South Thailand
. Our car was mostly filled with foreigners including the ones on a tour with one of Tai's tour guide friends. They sat across from Alex and me. There were young backpacker types down on the other end - some American accents there.

Around 9 pm, the train person came around and lowered the top bunks and brought out the lower bunk mattresses, pillows and blankets. Alex was OK with getting our space ready for the night this early and with taking the top bunk. She had more light up there but I had more space and less height to fall. There were seat belt straps along her bunk. I read for a short time and then settled down for the night. It was pretty comfortable, I would alternate between being a bit hot and bit cold but OK pretty much. When I decided to use the toilet, the train stopped for what seemed like an hour so I had to wait until it started moving again. Then later I heard Tai telling us that we were getting off in 20 min. That turned into about 40 minutes but that was OK. It took a bit of shuffling around stuff to prepare for de-training.

Once we were off, Tai led us to a small restaurant near the platform where we had breakfast. Then we boarded a minivan - Alex and I in the same seats in the back - and we drove for about an hour. We made a toilet stop where we had access to a 7-11 mini-mart. I took out some more money fromt he ATM to cover the optional excursions 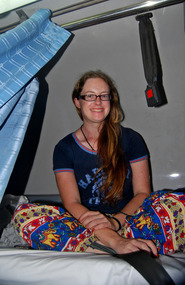 Alex-Train arrives at Surat Thani -South Thailand
. I don't think I bought anything else - oh, yes, I went to a pharmacy across the street and bought some throat lozenges which I now don't seem to need since I have advanced to the runny nose stage. Somewhere I also got some of Tais favorite ginger tea to help me recuperate.

We drove for another couple of hours past a varying landscape. In the towns I noticed that there were as many small trucks as there were cars. I wonder why. There were also a lot of tree plantations which I think are probably rubber trees. Also, the landscape included some amazing mountains with rocky sides which were almost totally covered in vegetation. They looked a lot like the southern Chinese limestone mountains.

Shortly before lunch we arrived at the Morning Mist Resort. It is very near - within walking distance -- of the National Park. A river goes by the end of it and there is a variety of bungalow types set in a lush tropical garden with views of mountains around. There are ginger flowers and lots of others I recognize but do\n't know the names of without looking them up. On the path to our room, there are some beautiful blue flowers hanging on vines almost down to the ground. We settled into our room. This was made a bit difficult because the electricity wasn't working and it is pretty dark inside the room. Finally by dragging out my various pieces of luggage onto the balcony to sort stuff, I was pretty much organized 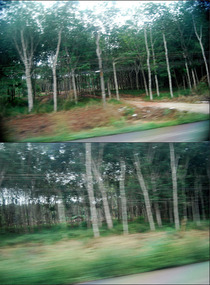 From minivan to Khao Sok NP - Thailand
. I spent some time copying stuff off one of my small sd cards so I could give it to Frank whose camera was missing its card. I think I was panicking because I couldn't find some other things but I can't remember what they were now.   I took a sort of shower because the water wasn't really warm.

Once I was done, I realized I was hungry. Alex was as well so we went to the reception area - restaurant and ordered lunch. I had a Tom Yum soup for my cold. I couldn't get my fruit shake because their blender wasn't working. After lunch, I went for a very short walk to the river. I got lost a few times and couldn't find the room. I met a young man who showed me a weird spider with a horned head. I tried to take a few photos but they probably didn't come out all that well. After that, I joined Alex in taking a nap. We both slept pretty much until dinner time. I did get up a bit earlier to sort out my stuff for tomorrow. But I forgot to dig out my sneakers. I haven't been able to charge anything but just before we went to dinner, the lights came on. So that was good. Although we had kind of gotten used to the candles that Tai brought us - they looked very nice in the bungalow.

At dinner I had pad thai with tofu. I didn't really like the tofu that well. Alex took photos of my drink with its lovely flower decoration and of Frank and Shane's rice - one was shaped into a little man with five rice balls. Not sure what the other one was. We stayed around the tables talking until Tai asked if I didn't want to go to bed. Margaret asked if I wanted any meds. I said I was OK. But I did get an extra roll of toilet paper to blow my nose. Alex is already asleep I think. I will plug in the computer to charge and lock it in a locker tomorrow while we are away. 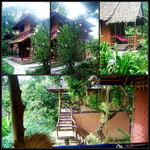 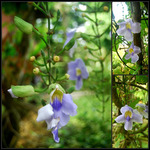