Travel through pristine jungle, rubber and oil plantations before
boarding a long tail boat for a ride across stunning Cheow Lan Lake,
with one of its islands as your destination. With limestone karst hills
rising almost 1,000 metres into the air and surrounded by beautiful
green waters, the area is incredibly picturesque. Trek to the an island
cave and discover its eerie stalactites and bats hanging from the
celling, with subterranean streams at your feet. You’ll enjoy lunch in a
local raft-house before having free time to relax, swim or kayak around
the lake to search for wildlife – the water is clear and teems with
aquatic life, and you might spot hornbills, langurs, macaques or gibbons
above water. Return to your accommodation for the night. 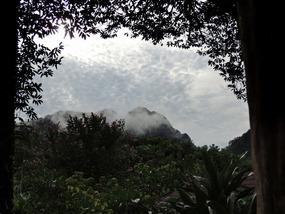 Morning Mist Resort - South Thailand
. We were due to leave for our all-day excursion at 8:30 am. Tai suggested that we get breakfast at the 7-11 after an hour's drive. At 8:36 I gave up waiting for the toilet at the resort restaurant after my cappuccino and went to the van. Alex just ran back to our room for something and then Frank ran back to his room. Everyone patiently waited in the vans. Then the driver took off after the first van - going as fast as he could, it seemed. We passed some of the same landscape as when we arrived. There were the rubber trees and the trucks. I asked Tai abut the trucks and she said it was easier for the local people to transport products, such as shrimp and other seafood, squid, in trucks rather than vans.

After the hour's drive, we arrived at a town with the 7-11. There I bought a few things for breakfast - yogurt, sweet potato chips and a packaged ham and cheese croissant sandwich. I got in a separate line from Alex only to have the person in front of me have a problem with his receipt - apparently he had returned a sandwich but was still charged for it

Morning Mist Resort - South Thailand
. The cashier said it was taken care of but the person persisted and the manager looked at it and then the refund was processed. The cashier was then free to cash me out. He separated out my sandwich and I paid, but I was uncertain whether I was getting the sandwich that I believe I paid for. Oh, he was unwrapping it in preparation for heating it up I think. I shook my head and got my unheated, and largely unpalatable, sandwich to go and rushed back to the van. So even when things seem familiar because it was a 7-11 after all, they can be different and confusing.

I had trouble keeping our itinerary in my mind. I never knew what was next. Well, we continued on our drive, then we got into a long-tailed boat to cross the Cheow Lan Lake. The ride may have been about an hour or so. It was overcast for most of the day so the spectacular scenery will not look as spectacular in my photos (plus my view was often obstructed). We were surrounded by the oddly-shaped limestone mountains covered in jungly greenery 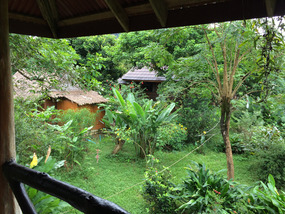 Morning Mist Resort - South Thailand
. The water itself was a dark emerald green. Our boat sped along and raced with other tourist boats. Our group of 7 was supplemented by other tourists from the resort.

This is where things begin to get more confusing. I think we next went on a 30 minute trek up and down to some other part of the park where there was a smaller lake. The trail was a little muddy in places and had rocks & roots. Luckily I had a wonderfully balanced wooden stick to help me keep my balance. I also had Tai and Margaret and sometimes Frank as well to keep me standing up and not lying down on the path. Once we got to the end of the path, we boarded a bamboo raft that had water sitting in its bottom. We arrived at the site of the cave. I did the part where we walked up some rocks with the help of a bamboo railing to the mouth of the cave. Then our guide said that we shouldn't touch the walls of the caves as that destroys the building of the stalactites and stalagmites. I took a few steps with Tai's flashlight and decided I didn't see well enough to continue so I turned back 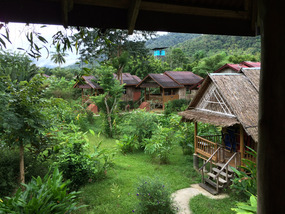 Morning Mist Resort - South Thailand
. Margaret sent Frank to acccompany me to the railings so that no harm would come to me. Wasn't that sweet of her?   I chatted with Tai until the group came back. They said the cave was very nicie but I have a few photos I took of photos posted on a bulletin board. I was sorry to have missed the bats that were supposed to be in the cave.

After the caves, we took the bamboo raft back, then did the 30 minute trek in reverse. I think it was hillier but I still did ok, not being that much behind the others. Then we got in the long-tailed boats and went to a resort with bungalows on the water and a restaurant where we had a nice lunch. Some went swimming afterward. Alex and I took out one kayak and Frank & Simon took out another. Margaret was afraid to try it. I did remark to Alex that I hope she had life-saving skills since we didn't have life-jackets and I am a poor swimmer. We floundered a bit. We had a discussion about who would steer and I thought she said she was but then she thought I was so that wasn't working 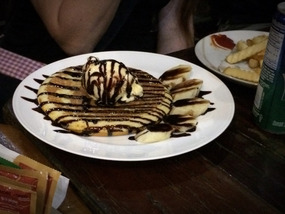 Morning Mist Resort - South Thailand
description
. Then I attempted to steer from the front but she didn't think my method of steering worked from the front. I do not know since I have only steered by myself in my kayak. We might check out our theories when we have an opportunity to go sea-kayaking.

After kayaking in my clothes, I had to change into my swimsuit and sarong - that was OK but a bit backwards. Now I had a bunch of wet clothes to drag around in my towel. We got into the vans and made one final stop at the dam. The big lake at the National Park is not natural but man-made as a result of the King's dam project here. Tai is very proud of her former king. We saw photos of him dedicating the dam project and Tai posed in front of one to get her photo taken. It is quite sweet. Then we were off back to the hotel. There were a lot of floppy bodies and heads on the ride home.

Once we got back, I took a shower and washed up some of my clothes. I hope they will dry before we have to pack up at 11 am tomorrow. I then went back to the restaurant and joined Alex and Shane who were having drinks. Then we were joined by Margaret and Frank and we had to decide where to eat and when. Simon was roused from a sleep and it was after 8 pm before we finally had some dinner. They are all very nice people. Frank, Shane and Simon, with a reluctant Margaret went off to some Bob Marley bar and Alex and I headed back to our room to do our travel diaries. Now I will brush my teeth and put my clothes to dry in front of the fan. 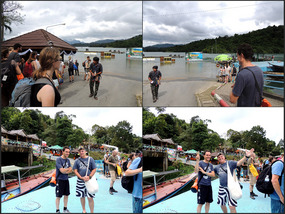 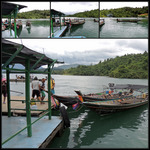 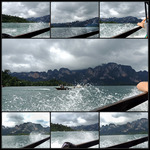 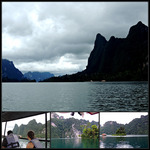 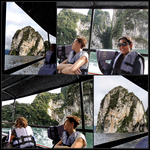