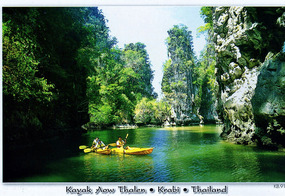 Ao Tha Lane Sea Kayaking - Krabi Thailand
. About half way along the coast between Than Bok Khoranee and Krabi town is a bay of mangroves that might just be the most beautiful bay in Thailand. Surrounded by towering karst formations and many small offshore islands, let the waterways become your pathway as you move slowly through the bays and canyons, discover inlets, caves and hidden lagoons, and check out the local wildlife up-close – the birds overhead and monkeys in the trees. If you do see a monkey, make sure you secure your belongings and any food! If you have time today in the afternoon, you could explore the beautiful underwater world around Ao Nang with some scuba diving, which includes three dives, or maybe absorb Thai culture through the tastes of a Thai cooking class. In the evenings, you can stroll the beaches, sample local fare at a seafood restaurant, enjoy a relaxing massage on the beach, or simply sit back with a good book and a cool cocktail to watch the sun slip beneath the waves.
Included Activities 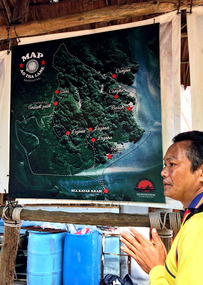 Mr. June-Ao Tha Lane Sea Kayaking - Krabi Thailand
. I was the first of the 3 of us in the "girls" room, but Tai was up very soon after. I went into the eating area with my book and read a bit before the Mr. Air our homestay host came in and some of the others arrived. I asked if I could help set up breakfast but was waved back to my seat on the bench.

When Tai came down, she helped with breakfast. She pointed out the very sweet offerings: some black sticky rice wrapped in banana leave tents, balls of sticky rice filled with a small ball of sugar, brown sugar cake, some tapioca with a sugar topping in squares that looked like lemon tarts, some fried donuts, and some sugary fried sticks (not sure what else they were made of besides sugar). There was also some Southern Thai fried chicken and white sticky rice. I think there were some other black sticky rice balls covered in powered sugar. I guess Thais like a sweet breakfast, or at least the Southern Thai people. Initially our group balked at the sugar overload but I think most of us tried at least half of the tidbits. I had some nescafe to stave off caffeine withdrawal. 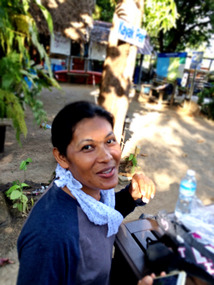 Tai - Ao Tha Lane Sea Kayaking - Krabi Thailand
. I think that traveling helps teach you that people on the whole are people mostly like us - they have cultural differences, different belief systems, but generally are pretty much the same, despite what the xenophobic nationalists would have you believe.

At 8:30 am we piled back into the van for the short ride to our next hotel: Ben's House in Ao Nang in Krabi. We are a 15 minute walk from the beach. We have about 2 1/2 hours to our sea kayaking excursion. Then we get to decide what to do as optional excursions for tomorrow. I would definitely like to go to Phi Phi Island....I hope that I won't get seasick. I may end up taking dramamine as a precaution. I showered and dropped off some laundry since we have 2 nights here and my clothes feel very sticky.

At this point - which is the next evening - I can't seem to remember the order of the day's activities. We must have eaten lunch. Maybe we drove to the place where we would go kayaking and ate there. I think so. Then it was maybe around 2 pm when we got ready for the kayaking. We got our vests and our paddles. There were 2 \people per kayak and Tai put me with our guide Mr. June. That was good since he did the steering and I could stop and take photoso when I wanted to. Mostly, it worked out, but once or twice, I had to rush my photos because I felt I was being remiss. 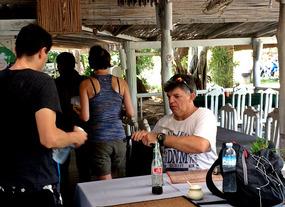 Ao Tha Lane Sea Kayaking - Krabi Thailand
description
. The scenery was so gorgeous because we rounded a point where the cliffs went up high. Someone spotted a gecko or monitor lizard but I didn't really see it. Then we rounded a corner and came upon the gypsies caves where they buried their dead. Not much farther around another corner we came to a landing spot where we took pictures of all of us jumping, apparently even me. It may have been called "outside"  or maybe not. We entered a canyon where the channel was quite narrow and then we turned a corner there where we entered a mangrove forest. I think our guide said there were some 40 odd species of mangrove - not black, red and white, but large leaved and small-leaved or something of that nature. We got to a point where the channel got too shallow and had to turn around.   It was harder getting back because then we had to go against the current but Mr. June and I made a final burst of speed to get back first. I was pleased when Frank complimented me and said he thought I was an excellent kayaker!

We went out to dinner at a restaurant that Tai picked out. Alex and I shared two appetizers - chicken satay and spring rolls and we shared the fried banana and chocolate dessert. I had a big Leo beer that I couldn't finish by myself and a fresh coconut drink with a beautiful flower and umbrella. The others had exceptionally nice flowers carved out of watermelon and cucumbers maybe.

We put the a/c on to sleep. I can't remember much else except that I stayed up until almost 11 pm I think but still didn't get to finish this blog entry. 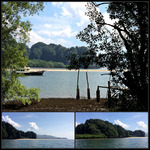 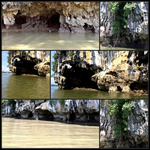 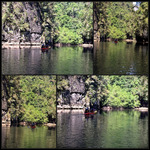 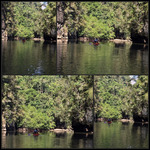