Intrepid Trip Notes: Get out your best book or find your entertainment at the scenery out the window, as today’s a long day of travel (approximately 9 hours) 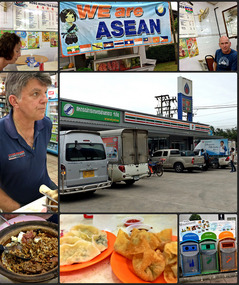 7-11 Lunch - Drive to Penang Malaysia
description
. The journey by private minibus sees you say goodbye to Thailand and wave hello to the cultural melting pot of Malaysia. The fascinating island of Penang was the first destination of the colonial British in 1786. They invited the Chinese, as well as others from all over Asia, to live on this island in the tropics. Today, this exotic fusion of cultures still exists and the World Heritage site of Georgetown contains a fascinating mix of religious places of worship. When you arrive, you’ll take an orientation walk around the blend of colonial buildings, tumble-down shops and hawker-filled alleyways to get your bearings. The food here might just be the best in Malaysia, so tonight why not seek out the endless food stalls of this food paradise. Your guide can give you some tips, or ask the locals! Look out for local specialties like Nasi Kandar, Penang Laksa, and Char Kway Teow.


There is less to report today since it was mostly a driving day. We drove for a half-hour or so before stopping for breakfast at one of the ubiquitous 7-11's. I think. I don't really remember. Oh, maybe I do. I got a yogurt, a croissant and a mango package and a 3 in 1 coffee (with milk & sugar), but I didn't know that when I was buying it. Frank ended up paying for them; I still owe him at least 1 beer. When I left the shop, I had some kind of waffle thing and a ham and cheese sandwich (which I still haven't eaten 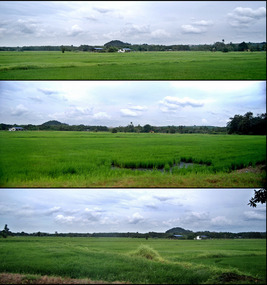 Rice Fields - Drive to Penang Malaysia
. We stopped again somewhere for lunch with the dumplings and rice dishes that I have photos of - at some roadside rest stop area I suppose.

We drove for a few more hours. The scenery wasn't so different from the rest of Southern Thailand - palm trees, rubber trees and banana trees. Just before the border, we started seeing some rice fields. We crossed the borders around 2:30 pm I think. It became an hour later. At first Malaysia seemed a little neater - with more orderly houses enclosed in fenced-in yards. The cars were smaller and I saw a few older ones too. I saw hardly any of the bigger personal-sized trucks. There was some flooding of the fields at the very beginning. Then back to the rubber trees and the palm oil trees - fewer banana plantations. Wen we crossed the border, we switched vans. We had to walk a little bit between the two passport control booths. The Malaysian side had the fingerprint screens.

We didn't get to our hotel in Penang until about 6 pm. We crossed over a big bridge to the island of Penang (Sultan Abdul Halim Muadzam Shah Bridge or Penang Second Bridge). We are on a main thoroughfare called MacAllister Street in the center of Penang - not that far from the old section and the Chinese pier section. Our room is fine - we have a view down a street and we have quite a few surfaces on which to put things. Everyone is on the 9th floor with us

We waited until about 7:30 to have dinner. Alex was still feeling ill from motion sickness so she did not join us. After dinner in a restaurant that had food carts that you ordered from, all of us except for Tai went in search of a bar for "one drink."  Rather unluckily, or luckily, we struck out on the revolving restaurant, and some others, but finally someone spotted an open one just down the street from our hotel. We sat outside and ordered a bucket of beers - the only drink available - while sounds of karaoke came from the interior. Some of the singing was awful. Simon was wincing. We found out that he used to sing in a band - jazz and funk. He also played saxophone in the Swiss military band for over 240 days - to fulfill his military service requirements.   I can't remember what all we discussed beyond that - there were some hysterical moments but we stopped with the one bucket of beers. When I cam back, Alex said she was feeling better and didn't want any water, or sprite, or crackers. I was too tired to try to fix my flight so I went straight to bed. I am getting anxious about changing the flight to Sacramento though. I should have tried to take care of it yesterday. 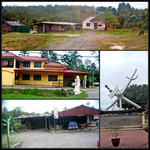 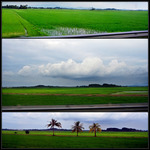 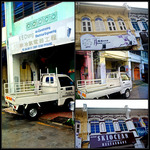