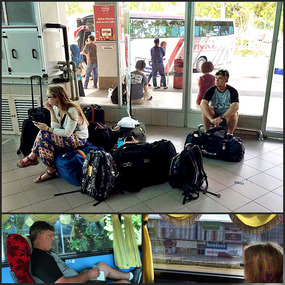 Penang Bus Station - Malaysia
description
. This is a great opportunity to try and chat with the locals and maybe get some tips out of them for your next destination. Kuala Lumpur, the cosmopolitan capital of Malaysia, is affectionately known as KL and you'll almost always hear locals refer to it by its acronym. Communities of Indian, Chinese and ethnic Malay people mingle peacefully, allowing travellers to get the best of all three worlds. KL has grown from a sleepy little village to a skyscraper-lined multi-million-peopled metropolis. The city can seem vast, but the main focus is the traditional core of the old town (the former colonial centre), the luxury hotel and shopping mall district of the Golden Triangle, and bustling Chinatown and Little India. Once again, you’ll be incredibly spoilt with the breadth and quality of dining options on offer. From simple-street side fare that attracts queues of customers eager to try the latest dish said to be the best around, to seriously high-calibre, world-class cuisine.


I kept waking up during the night, I am not sure why 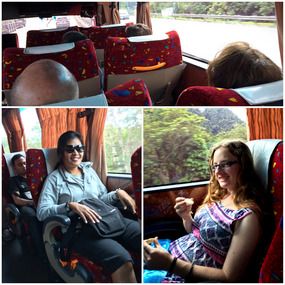 Tai & Alex - Public Bus to Kuala Lumpur Malaysia
. finally I woke up a half hour or so before our agreed on time and I took a shower. When I was done and came out, Alex greeted me with a cheerfully awake "good morning" and so I continued with my packing. Alex mentioned she was going to breakfast so I followed her since I was almost all packed by now. We went down with a half hour to spare and then got back to the room to grab our bags and be back down in the lobby by the appointed time of 7:45 am...or nearly on time. Steven, our guide from yesterday, drove us to the bus station.

We got our seats on the bus and waited for the other passengers. We had two rows and then Tai-Rabbit sat behind Simon. The scenery wasn't that different -- mostly palm oil trees and then some karst mountains. I guess the highlands might be around here or maybe not. I fell asleep for a bit. The only other excitement was the dripping from the A/C which fell a bit on me but more on Alex so she pulled out her poncho and toughed it out 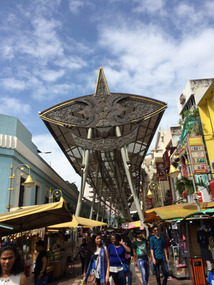 Kuala Lumpur Malaysia
. We had one pee break and then back on the bus for another two hours!

When we neared Kuala Lumpur, we began to see more houses...developments that were newish and fenced in. There were some villas...also fenced in and then we began to see some high-rises. Lots of high-rises. The roads were quit impressive. I forgot to mention the toll road with touch and go and some sort of Easy Pass system (I think I did mention it before). There were lots of flybys and overpasses, underpasses, ramps and lanes. Lots of cars and lots of traffic. Yesterday was a bank holiday, so I think people were getting back to work today.

When we left the bus at KL Central Station or something like that - a shopping center with shuttle to the airport, we were picked up by a nimivan and the driver was pissy. Tai does not like him at all and has had trouble with him before. He did drop us off at our hotel. We had to walk around some areas, walk through a shopping center and then take the elevator to the hotel lobby. We managed to check in by 2 pm but it took a long time because there was a single check-in clerk. I played peek a boo with a little boy with silver high-tops. When Alex and I got to our room, we immediately smelled the cigarette smoke. This wasn't our best hotel. We met in the lobby 20 minutes later and when Tai asked about our rooms, we complained about the smoke and the woman at reception switched our room to the 14th floor which is non-smoking 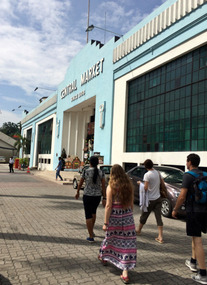 Following Tai & Alex - Kuala Lumpur Malaysia
. We moved our bags and rejoined Tai for a short walking tour of KL.
We headed for the Chinese market and then had lunch at another food cart area. Today's lunch for me was not nearly so good as yesterday's. We had some weird lemon juice and my dish was like Chef Boyardee spachetti. I have been mostly going for the noodle dishes. I didn't want much of this one. After lunch, we split up. Alex and I did some shopping in the Chinatown. I bought some postcards, a magnet and something for Theo. Alex bought some Xmas cards. We got back to the hotel just in time for a quick change on my part before we met the group to walk to the subway to get to the Petronas Towers.

First we walked outside to see what they looked like and whether we wanted to get tickets to go up. Alex kind of pushed for doing it today so the whole group of us went along and we got tickets for 7:30 pm. Mine was almost half price as a senior. Wow! Alex and I and Tai went off and got something sweet to eat for dinner and then came back. We were worried the others wouldn't show up but they did. We all got to go up to the skywalk and then the 86th floor. It all took about 45 minutes and tuned out to be quite nice. After that Alex and I stayed in the gift shop long enough to lose sight of the others. We had arranged to meet Tai at the fountains at 9 pnm so. After we got back down, we went to the fountains and found her

Metro ticket to Petronas Towers - Kuala Lumpur
. We walked around and took photos. An Asian man wanted his photo taken and I offered for Alex to take it. He was very fussy and made her try at least 3 times. Then I took hers and so did he. He wanted to send it to her but she didn't have his app so she took a photo of it. It was really quite good. We got back to Tai.

I think we were worried about how we were going to find the others and somehow after the fountain show, Tai or Alex saw them sitting at the bar/cafe. We were kind of tired but they left it up to me and I decided to stay and have a drink with them. We managed to leave after no more than one drink I think. They were upset because they had gone all around - up and down - and around the fountains to find Alex and me after we stayed in the gift shop and got separated. I guess it was another instance of miscommunication. We had some laughs. I went to find the restroom and got lost. We then walked back to the hotel and the others split off to find some food before calling it a night.

I plugged in my phone since it is almost dead. It did great today since I have put it on airplane mode. Now I should check the computer to see if I need to plug it in as well. But the plugs here are English so I will have to get our my adaptor. I am using Alex's plug for the phone. Time to brush my teeth and hit the sack. 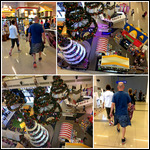 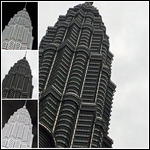 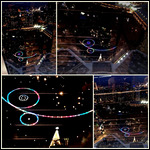 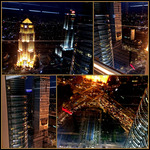 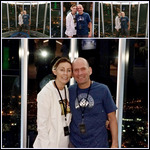 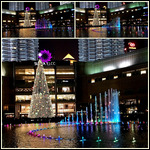 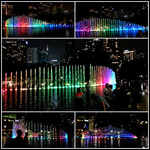