Intrepid Trip Notes: Take a half-day tour and absorb the fascinating multicultural mix that
gives Kuala Lumpur such a uniquely cosmopolitan feel. You’ll also visit
some of the city's most impressive architecture such as the National
Monument (commemorating those who died in Malaysia's struggle for
freedom and based on the Iwo Jima Memorial in the USA), the vast
National Mosque, featuring a bold and modern design, and the Istana
Negara (National Palace). You’ll also drop by the Royal Selangor Club,
which looks like it’s come straight from Tudor England, and scale the
272 steps up to the Batu Caves, where shrines are filled with
fascinating statues of the Hindu Gods. In free time, you might stroll
Dataran Merdeka (Independence Square), or shop in Suria KLCC (one of
Malaysia’s premier shopping destinations) and then head up to the
Skybridge & Observation Deck of the iconic Petronas Towers. Those
with a head for heights can also climb up the KL Tower at dusk and watch
the city lights come to life. Lake Gardens is home to a number of
sights, including the National Planetarium and the superb Islamic Arts
Museum, home to a standout collection. If culture’s your thing then
perhaps enjoy a cultural show, or try your hand at Batik, a technique of
dying cloth that’s a real art form. Tonight, be sure to indulge in the
myriad tasty food options Kuala Lumpur is famous for. 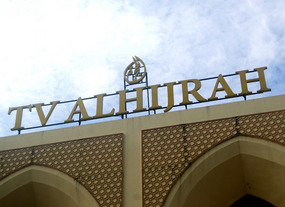 TV Al Hijrah - Kuala Lumpur - Malaysia
. I thought I was an hour behind but I must have more than caught up because Alex informed me that it was 7:36 am and we still had time for breakfast and getting ready for our 9 am departure. Today I had a boiled egg and some noodles I think. The egg was good. The coffee OK but I found some milk today so it was better.

We had Sam as our local tour guide today. He is 4th generation Malaysian from some province starting with a B I think. He seemed very knowledgeable. He apparently lived in Germany for awhile so he speaks German and does tour leading for cruise ships as well as tour companies like Intrepid. I don't know what Tai thinks of him.

First we went to the large National Mosque - maybe third largest in Malaysia. We had to dress up in gowns and we women had to wear head scarves as well. Sam said we would look like angels. I think Margaret looked like a nun and she said the same for me. The people at the mosque were quite nice 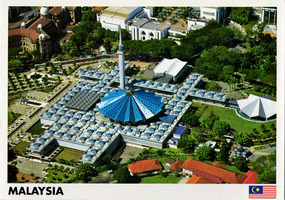 National Mosque - KL - postcard
. It was modern and had a nursery for children when their parents went to work that was funded by the Muslim Welfare Association.

Then we stopped at the war memorial, which is a main feature of the National Monument. The sculpture was patterned after the Iwo Jima Memorial, which the King had seen in Washington DC and had designed by an artist from the USA. It has 4 or 5 Western soldiers standing and 2 enemy soldiers lying down. At least I think that is what Sam said, but it doesn't make sense if it is the Malaysian independence memorial. There are lots of hibiscus trees planted here as the hibiscus is the national flower and betel nut trees - the symbol of Penang. (This bit about the betel nut tree is not clear here.) Sam said his mother died of cancer at 44 years old from chewing betel nuts with lime and leaves and dried fruit. The long traditional of betel nut chewing is being discouraged now. Sam gave quite a bit of his family history - which was unexpected and also rather sad as I remember 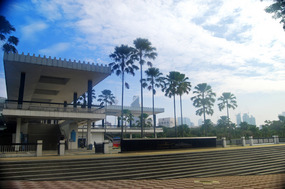 As we drove around, Sam pointed out various buildings and features but I couldn't see them because the minivan windows were too low and all I could see were cars on the road. We went to the Batu Caves, where there was a Hindu temple in the cave. There were lots of macaques who swiped bananas, water bottles and flowers, but they were very cute, especially the ones with the babies. There were 230 steps to climb up into the cave which was very large with niches and little shrines as well as the larger temple area. After looking at the temple, we stopped for drinks at a small restaurant where I had a fresh coconut. And so did Frank.

We then headed for the Royal Selangor tin factory which turned out to make pewter, gold and silver jewelry now. It is the oldest factory in Malaysia and was founded by a Chinese man. The factory is still in the family and has lots of amenities for the employees. (One example was the hand plaques for workers who had been with them a certain number of years 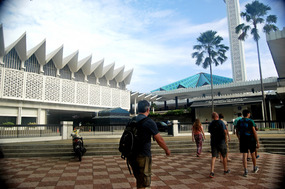 National Mosque - Kuala Lumpur - Malaysia
. What a perk!) We got to see several workers at various stages of the process and we also got a chance to hammer one of the vessels. Frank, Alex and I tried after we encouraged Simon to try since he is the craftsman. We had lunch at the tin factory because they have a restaurant-quality cafeteria with lots of Western style food, like panini. I had a grilled vegetable sandwich. it was good.

After we got back to the hotel around 2:30 pm, Alex and I went for a walk with Shane to make copies of our group photo at Petronas Towers that Shane had bought. Mission Accomplished we continued to shop in Chinatown. I think Alex was looking for keychains. Shane just likes to walk - he thinks nothing of walking for hours - for miles. At some point I had expressed a desire to see the I love KL sign. First we thought it required a subway ride but then Shane worked out that we could walk to it. By this time, I was beat - it had been quite hot out - and wasn't so sure I wanted to do it, but ended up being carried along by their enthusiasm 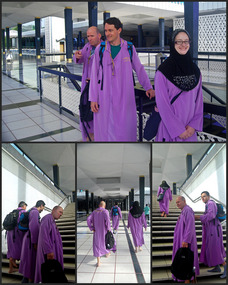 National Mosque - Kuala Lumpur - Malaysia
description
. We quickly found the way back to a place Tai had taken us (the Merdeka Square area) and then Shane led us to the KL sign. By this time it had started to rain. Alex seems to love the rain. I think she could easily have danced around the streets in it. We donned our rain gear and walked in the rain until we got near enough to see the sign. Alex suggested that we find a restaurant and get a drink or something to wait out the rain - it had already started to stop - and maybe there would not be many people there.

We had our drinks, went to the sign, waited our turn and took photos of ourselves and other people, both for them and of them. We then went into the KL City Museum which is in one of the interesting buildings next to the sign. There were some old photos and some history of the development of KL. It is not very old for an Asian city. They had a model of the city with some statistics and things - most of which I missed in the video presentation. I did like the flashing lights though. Then we ended up in their gift shop where I bought some KL bookmarks. We walked back to the hotel and by then it was 6 pm. I worked on my postcards until it was time to meet Tai and the group at 7 pm.

Instead of going to the bigger hotel nearby for dinner, Tai had found a place in Chinatown - which turned out to be the Swiss Inn we had seen on our afternoon walk 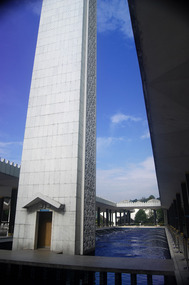 National Mosque - Kuala Lumpur - Malaysia
. The place had western food and Asian food. I think everyone was pretty happy except for Tai because her meal was not spicy enough. I think she is worried about the group feedback. Alex found me on facebook so both she and Tai have requested me to be their friend. As soon as I have uploaded my i-phone photos, I will try to get on the internet somewhere and accept them. This is my new strategy when taking photos on the phone. If I do not get onto the internet, the I-phone photos may not be uploaded onto the I-cloud and I may be able to get them uploaded to my netbook from the phone. If they get onto the I-cloud, I may not be able to access them with my netbook. Such a pain! After dinner, Alex and I walked back to the hotel with Tai as the others went out for a drink somewhere. I uploaded my latest i-phone photos after several failed attempts . That accomplished, I worked on today's blog entry but haven't been able to upload my Nikon photos from yesterday or today. Alex is ready for bed so I am quitting now. 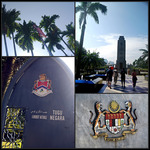 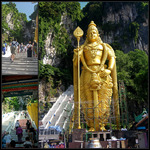 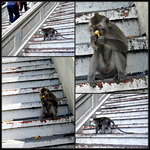 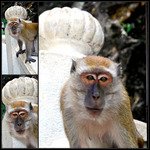 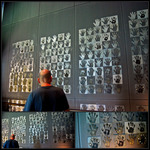 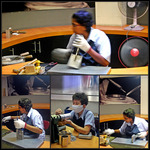 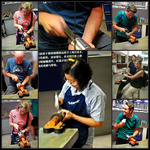 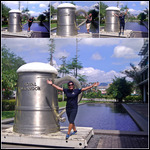 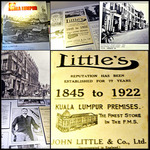 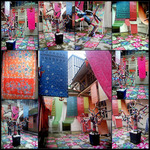 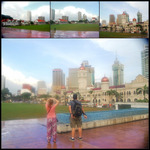 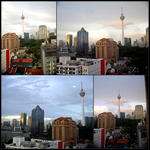 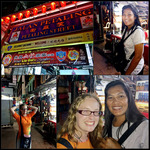