Walking around Malaka on Free Day


Intrepid Trip Notes: Today you’ll get to know this port city better with a quaint trishaw
tour along the narrow winding streets. You’ll admire Chinatown's unique
Peranakan architecture, get a taste of old Melaka, and learn about the
ancient spice trade. Take in sites such as Harmony Street (so called
because it contains the prayer houses of Malaysia's three main faiths),
and stop by a mosque, Chinese Buddhist Temples, and a traditional Muslim
house-museum. In your free time this afternoon there are plenty of
historic sights and museums to check out. From 17th century Dutch
buildings and ships, to museums that showcase the local history of
ethnic Chinese-Malays, the travels of diplomat and explorer Zheng He,
and even a museum that focuses on concepts of beauty in different
cultures. If you’re looking to get more active then you could perhaps
jump on two wheels for an Eco Bike tour around the city, or see Melaka
from a different perspective with a boat tour along the river. 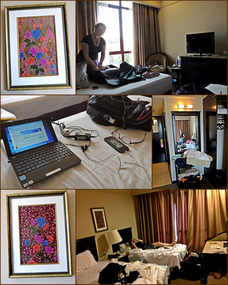 Mimosa Hotel - Melaka - Malaysia
. We had to have breakfast at 7:30 am because it was the appointed time for our group. There was white toast, fried eggs, juice, fruit and coffee and tea. The tea was proclaimed to be good.

After breakfast, I joined Alex and Shane for a walk around the city. We went out and immediately were struck by the heat so headed for the shady side of the street along the river. This was very pleasant with all the wall murals and older buildings and tour boats going up and down the river. We had crossed the river -- maybe at the famous Ghost Bridge -- and continued. I still had no idea of where I was or was going - I just followed them. The sidewalks here are a bit treacherous for me with ups and downs and holes etc but Alex often cautioned me about the various pitfalls. We got down to the point where the cruises left from and bought ticket for the cruise. This is where I think I got the very good discount - almost half price. After the cruise (which was very pleasant) where we crossed under many bridges and saw the monorail above us, we got off and ran into Margaret and Frank. They had just finished with the Maritime Museum and sort of recommended it. They were ready to go off on the cruise. Something happened there - I think they were too late for the next one and then the cruises closed down for two hours midday - so they missed the opportunity again. Meanwhile we went into the replica of an old Portuguese trading ship and read about the early history of Malacca (I use several of the various spellings for the city) 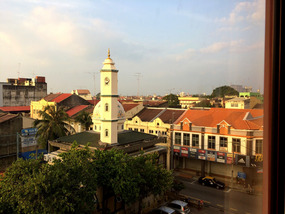 View from Mimosa Hotel - Melaka - Malaysia
. Oh, of course, Raffles figured into it.

We had stopped earlier for coffee and other drinks - I had a marvelous caramel macchiato that I took a photo of with my phone because it was a work of art and posted the photo later when I had wif-fi. It was a very nice cafe in the the back of a gift shop where I bought some postcards. After the museum, we stopped at an open-air - most are open-air - restaurant and Alex and I shared a vegetarian pizza that was quite good. Somehow Alex tricked me into eating 4 of the 6 slices. I thought it had 8 slices I guess. But she also had french fries- she said to make me feel less guilty. I paid for the lunch trying to compensate Shane for buying our photo at the Petronas Towers and I owed Alex moeny. Oh, on the drive to Malaca, I had noticed the Petronas gas stations. After lunch, we wandered around the shops a bit more. We split up at one point so that I could go back and get a camera since the Nikon battery died almost immediately after starting out 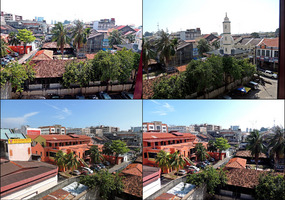 View from Mimosa Hotel - Melaka - Malaysia
. Alex wanted to do something too. We picked up our laundry at the reception desk and everything was accounted for. Shane went off and walked throurgh most of the rest of the city I think. Alex and I went back out but didn't get much farther than the night market street that was beginning to fill up and be very crowded. I saw some really purple dim sum that I wanted to try but ended up not doing it because I was full from dinner. I think I had some kind of ice cream or dessert that day too. We seem to do a lot of eating.

We were meeting at 7:30 pm or something like that with Tai-Rabbit to explore the night market. I think Alex and I had a short break in our room before that - with wi-fi. We may have had dinner at another place off the night market street or that may have been later. The meals are getting all jumbled up now. In any case, we walked down the crowded street - mostly there are little tourist trinkets and food. keychains, little toys, some decorated face masks 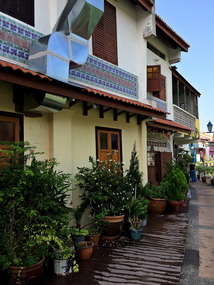 Melaka - Malaysia
. I bought some luggage tags with pokemon and batman on them. As Alex and I were following Tai and Shane and Simon, we got separated. I was for staying where we were, Alex was for moving on. We stayed by the restaurant we had eaten at the day before - The Geographer - but it was ages before Tai found us again. She had been waiting for us to catch up. Once we were together, we walked down the street the other way. It was interesting and I did notice that this night market did not aim for Western tourists but more local tourists. When we got back to our rooms, I was beat. I don't think I managed photo-uploading and didn't manage to blog either 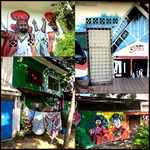 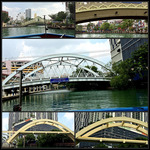 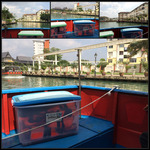 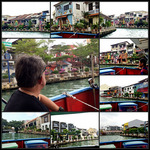 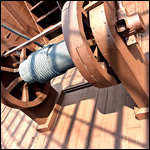 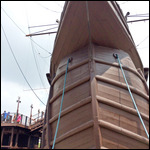 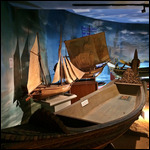 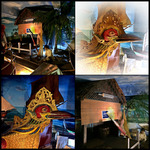 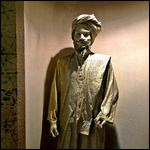 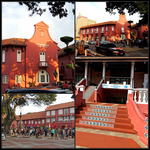 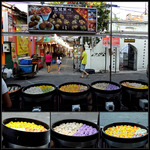 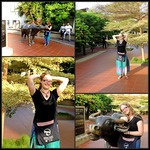 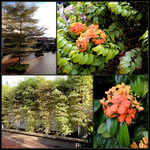 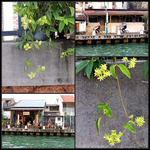 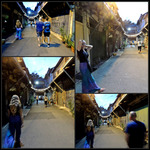 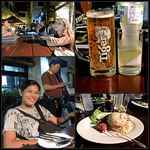