Around 4:30 am (Bangkok time), I felt too awake to sleep anymore and went in search of the check-in counter 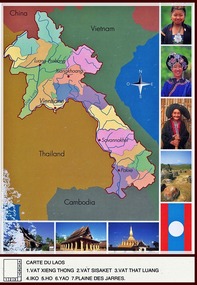 Map of Lao PDR - postcard
. I found it, got checked in with a window seat and told about the Bangkok Airlines Boutique Lounge where I am now seated with coffee, mini-muffin and another little pastry. I will still try to keep to my diet while on vacation. Sounds like a dubious proposition. I fear there is an urge to eat because it is hard to know what else to do at 5 am in an airport. I suppose they might have an art gallery but now that I quality for a lounge, I will stay here in the "boutique" lounge.

My flight to Vientiane was uneventful. It was a short hop and they managed to serve a meal - lunch I guess even though we landed before noon. There was a longish line for the visa. I only needed one photo instead of the two the instructions gave but that's OK. My transfer driver was there waiting for me and I managed to get some cash from an ATM so all is well. I need a currency calculator app on my phone or else to do my homework so that I do not repeat my Santiago experience.

My hotel is a "boutique" hotel off one of the main streets in the city center. It is not far from the PresiIdential Palace. Once I arrived at the hotel and checked in, I sorted my belongings into some semblance of order, verified that I did not manage to pack the foreign money I wanted to change. I panicked for a moment because I feared that I didn't pack any cash at all but I did have what was left of what Kara gave me for Greece (once we paid Candae for our portions of the Cape Cod rental) 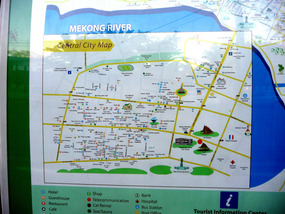 Map of Vientiane Lao PDR
. After reading the mystery book set in Laos that I had brought, I was not sure there would be ATMs but there was at least one! That comment might seem like a non sequitur but the mystery series was set shortly after the war years and Vientiane had not yet recovered. Were there ATMs then?

So after organizing, I took a shower and washed my hair. Then I set out. The hotel didn't have a map so I had to be conservative in my wanderings. I headed toward the Presidential Palace and explored one or two side streets. I found several temples, a monumental statue (King Chao Anouyong) within view of the Presidential Palace and the Mekong River. I somehow entered one temple grounds without paying the entrance fee but did need to pay at another. After returning from my walk, I decided I might as well eat out. I was a bit hungry but mostly thirsty because I forgot to take my water. I walked back to find my hotel and then retraced my steps back toward the Presidential Palace where I found the Mixok Coffee and Restaurant on a nearby corner My soup was excellent 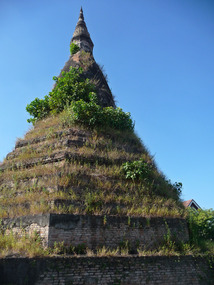 That Dum Stupa - Vientiane Lao PDR
. I did want to know how the Lao ate the bamboo shoot sticks in the soup because they did not seem all that digestible but he soup did taste good The lemon juice also was good but I forgot to ask for no ice, so I drank the drink fast so I could avoid drinking much of the ice cube water. There appear to be quite a few tourists in this area. I saw a couple walking with their guide book open. So perhaps they use bottled water for the ice. The only other problem was that I neglected to bring along insect repellent and something started biting me on the ankles at the last temple and then again at the restaurant. Food is pretty reasonable here - My dinner of Coconut soup, a
fresh lemon juice and a beer cost less than $6, included tip.

So I will settle in and upload all my photos for today. I may not bother trying to get wi-fi unless it appears with no problems. The driver called our local guide who told him that we meet tomorrow at 1 pm to begin our tour.

I had heard good things about Laos. It was unspoiled it was said. My first impressions were quite positive. Vientiane has touches of French colonialism with stuccoed, shuttered villas and fairly broad tree-lined avenues. I do like the trees - very big trees, some of them. I also noticed a lot of hedge trimming - some of the hedges have little red=orange flowers popping out in round bunches on the clipped surfaces. People are pleasant - one young girl gave me a wai greeting. Of course there are the skin-tight jeans and t-shirts, but no McDonald's yet that I have seen. There are some of the plastic tables and stools on the sidewalk for the mom and pop food operations. There appear to be a lot of new motorbikes and cars and hefty-sized trucks too, like 4x4's. I see Samsung written on buildings as well as Apple. Vientiane seems bustling and prosperous. On the other hand, the sidewalks have that third-world look with pits that you could fall into and lots of dust. The smells could be better in places too. I enjoyed my walk around the hotel area - at least going in one direction. Somehow I missed the famous fountain. I will look for it tomorrow. 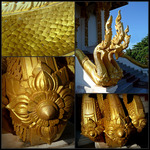 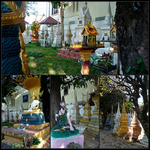 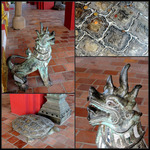 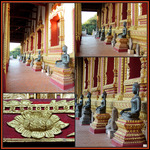 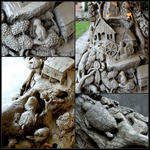 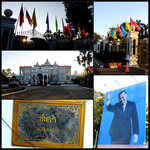