Well, it is now November 27th but I started out on the 26th 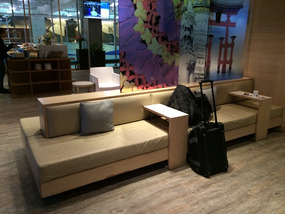 Airport lounge - San Francisco
. Happy Birthday, Jerry! I still need to get onto the internet. The airport wi-fi wanted my passport number so I scrapped that. It has been a long day.

I woke up before my 4 am alarm. Brenda was already up. I nuked the rest of my left over pizza. Candae joined us and we chatted so, even though I didn't realize it, we didn't start out until about 4:30 am for the airport. Poor Brenda, somehow she always gets stuck picking me up and taking me but Serge has done a bunch of inconvenient times too. Anyway, we hit some traffic for the airport because of the holidays. I began to get a bit anxious. I had Brenda drop me off as soon as a space opened up at the curb. Luckily the line at United wasn't so bad, but since I wasn't able to complete my boarding on-line, I had to use a kiosk. I always have problems with them. I think I was trying to scan my passport in some weird place again. Finally I got my boarding passes through to Bangkok and headed for the gate. The flight to San Francisco on United took an hour and a half 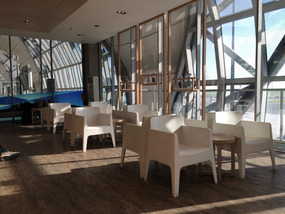 Airport lounge - San Francisco
. I had a 2 hour lay-over but wasn't able to get on the wi-fi there either. I tried to call Carolyn but somehow called someone else who was nice enough to call me to tell me I called the wrong number.

The 10 and a half hour flight to Narita Tokyo was long. My window seat was cramped even with the middle seat being empty. United has managed to degrade their meals even more than before. It seemed on this trip as if all the longer flights were arranged to appear to be overnight. We boarded around 10 (in the morning and got something that could be a lunch or dinner). Then they turned off the lights, made me close my window shade and then served breakfast toward the end of the flight which arrived in Tokyo around 3 pm. The final leg of my journey for today (and yesterday since I crossed the International Date Line and lost a day) was from Tokyo to Bangkok. They served us something that seemed more like breakfast - omelets or pancakes - at the beginning of the flight and then before we landed, we got a barely defrosted cinnamon bun and water 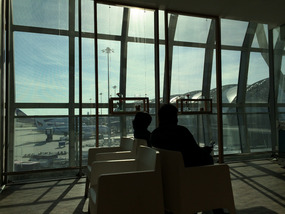 Airport lounge
. Then they came around with orange juice. The in-flight programming on the San Francisco to Tokyo stretch did not have seat-back monitors so I really didn't get to check the flight map which is about all I ever do.

So now I am in the Bangkok terminal. This leg was 8 hours plus I think. We arrived a bit late - after 11 pm - I was hoping to use one of my United Club passes due to expire at the end of december. There have been United Clubs in all the airports up to this one - the one where I could have used it. I tried to find out if there were any options at an info desk. Apparently I could get passes if I had boarding passes for the next flight. My boarding pass for the flight I have just finished doesn't count. There is a transit hotel on the next floor up. I may try it. I found some seats on a quiet, mostly dim.y lit corridor but some man plopped down and stretched out across from me and I don't feel that comfortable facing him with a 2 foot space in between.

Other than the crazy time changes, weird meals and lack of lounge and wi-fi facilities, everything is OK.

I wandered down another wing of the terminal and found a bunch of seats where people were bedded down for the night. Some had the foresight to bring big blankets; some had beach towels - maybe from Phuket holidays. I walked almost the whole length before picking my spot. While I was still reading, the woman next to me lay down with her head where I meant to put my feet. Luckily she sat up before I had to decide how to proceed with this dilemma. Next a bunch of young men - about 8 or so I would think - sat in the seats down from me with one sitting at the end of my row. I anticipated that might be a problem but when I tired of reading, I just lay down and eventually they went away. The only other problem was that the handy barriers that kept me less exposed from view turned out to be speakers for the airport announcements, but I guess I got used to those because I did get some sleep.