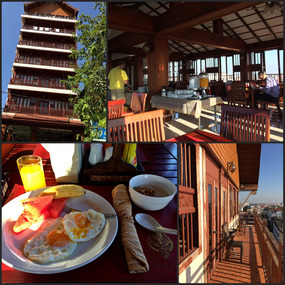 Manorum Boutique Hotel - Vientiane Lao PDR
. ...Vientiane is the charming and fascinating capital of Laos, with an intriguing mix of Lao, Thai, Chinese, Vietnamese, French, American and Soviet influences. Faded colonial mansions, tree-lined boulevards and old temples create an atmosphere of timelessness, particularly in the older part of town along the Mekong River. You’ll get to know the city better today on an afternoon sightseeing tour, including Wat Si Saket. It’s the oldest temple still standing in Vientiane and is home to almost 7,000 Buddha images. You’ll also stop by the former royal temple of the Lao monarchy, Wat Haw Phra Kaew, and Pha That Luang (the Great Sacred Stupa), which is the most important national monument in Laos, a symbol of both the Buddhist religion and Lao sovereignty. Don’t forget to ask your leader where to find the best bakeries today.
Sightseeing Tour including Wat Si Saket, Wat Haw Phra Kaew, Pha That Luang


I woke up around 3:30 am and couldn't sleep any more so i tried the wi-fi again and lo and behold, I got on. I must have been particularly sharp 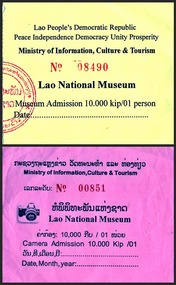 Lao National Museum - Vientiane Lao PDR
. i wished Jerry a happy belated birthday, wrote a facebook message to Carolyn, sent a few photos out to family and worked on a small selection of photos for facebook. Then I researched what to do with my morning before climbing 3 flights of stairs to the breakfast room. Breakfast was very pleasant - the windows were open and fans whirling - it is a nice light space. I had some fried eggs and a Lao soup I assume. The first taste of the soup was extremely salty and I didn't think I could eat it but, with the second spoonful, I detected some spicy flavors and soldiered on. Fruit and tea completed the meal. Now to head out and be sure to be back for the one pm meet-up.

I was so tired last night that I barely uploaded my photos and forgot to blog.

I guess at the time I omitted to include my morning activities. First I went to the Museum. Even though the map is quite clear, somehow I missed it - I guess it didn't have a large enough sign, but I did eventually go in. The doorman was quite officious - he led me to the ticket counter - pointed out my camera so they could charge me the photography fee, and then showed me which direction I was to proceed through the museum. I love these wonderful, idiosyncratic museums with their different assemblages of artifacts. I am beginning to notice what a huge part wars play in national museums. Here there were several rooms of war photos and soldier photos with guns and photos of guns 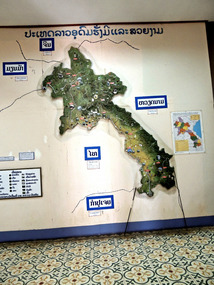 Lao National Museum - Vientiane Lao PDR
. Luckily, no carnage. But soldiers and medals, and then, later, prostheses. I wish there had been more crafts and traditional tribal clothes but it is always interesting to see what people consider appropriate for their national museum.

Next I visited another temple, Vat Impeng, at least I think that is which one it was. It was supposed to have very special artwork which I almost missed as I concentrated on the statues of Buddha below the huge tree and the various stupas on the grounds. I happened to be there during lunch when the monks were brought offerings of food and they took a break from their religious activities. I walked around looking at the interior decorations but felt uncomfortable intruding on their lunch so I left and returned to the hotel.

So I waited in the lobby a bit and then our Itrepid guide Vien turned up and said there was only another couple joining the tour and they were having lunch after arriving by plane. They have turned out to be a very congenial Australians from Sydney. Pip just finished the New York City marathon under 4 hours. I will have to find out her exact time. We headed off in a minivan and went to the Sisikat Museum where I could now see the interiors of some of the buildings and the 1000 plus statues of Buddha. They lined the arcade of a large courtyard. Vien explained the different styles and materials of the statues 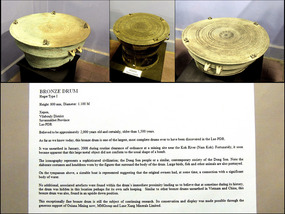 Lao National Museum - Vientiane Lao PDR
. The sandstone was early Khmer. Bronze Buddhas came later during the French colonial period. Thin, delicate shaped statues showed Thai influence. He also told us about young farmer boys becoming monks to take a burden off their families. They could get their educations from the monk schools and then when they were in their late teens they could decide whether they wanted to continue as monks. Men could join after being married but in no case could monks touch women. There apparently are no nuns in Lao Buddhism which is the second kind that believes that only the Buddha can be enlightened, not ordinary people, or even monks.

From there we went to Hor Keo which is not an active monastery because it does not have the 5 essentials: sanctuary, library, belltower ?? ....... Here Vien pointed out things that I hadn't learned previously. This temple had been rebuilt in 1976 I believe and it has one of the old pillars at one corner of the colonnade. Inside there are many old pieces including a replica of the Emerald Buddha that had been stolen by the Thai when they sacked Vientiane 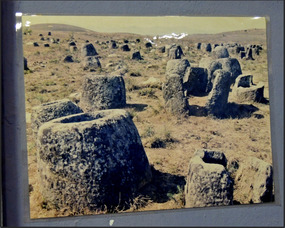 Lao National Museum - Vientiane Lao PDR
description
. I bought several postcards with Vien's help since every one I picked up seemed to be from Luang Prabang. We didn't go to see the carved stump so I wasn't able to learn of the significance of it.

We drove out past the triumphal arch for quite a ways. We passed the American Embassy and Ministry of Foreign Affairs I think and what looked like an upscale area. We reached a huge parking lot by the Parliament Building which I think I remember is no longer used - hence the parking lot is used for recreational purposes. We walked through a gate to the iconic Great Sacred Stupa (Pha That Luang). It is a very, very bright gold painted over concrete and bricks. We could walk around the stupa but could not climb to the higher levels since only monks were allowed to do that. I think I am getting any story we heard mixed up with the other ones. We were there quite awhile so I must have learned something. I might have been starting to fade at that point. Oh, maybe we learned about the nagas that are represented on all the temples 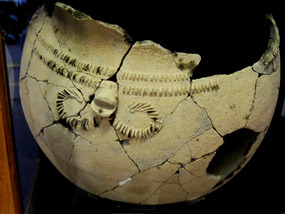 Lao National Museum - Vientiane Lao PDR
. The snake had seen that the Buddha might get rained on and decided to protect him so that he wouldn't get sick so the snake coiled up so the Buddha could sit on him and then the snake fanned out his 7 heads to protect the Buddha;s head. Then the snake thought he could be Buddha's buddy but the Buddha would not allow this since the naga was not human.

From the temple we went back to the Triumphal Arch modeled on the Arc de Triomphe in Paris but not totally finished. It is missing doors or gates and an elevator. Vien said there were 190 or so steps if we wanted to climb to the top and get a view. So far this is the highest building in Vientiane but there is a hotel being built by the Chinese that will be taller. The Chinese also built two fountains - one right below the Arch and another at the other end of the park. The Arch is enclosed in a roundabout like the one in Paris. As we climbed the arch, there were shop stalls set out on tables on several floors. The final level was reached by a spiral metal staircase 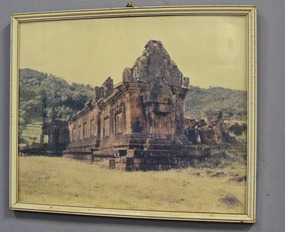 Lao National Museum - Vientiane Lao PDR
. The windows had metal grates so the visibility on the top level was somewhat obscured by the grates and the small windows in the larger concrete walls whereas the floor below had a balcony where you could see between the turrets. I think this was built around 1976. A lot happened in the 16th C, the end of the 1800's when the French took over and then again in 1976. The Lao kingdoms were often the losers in their wars but at least one king had also ruled the Northern part of Thailand (including Chang Mai) when his father-in-law died but then he had to go back to his land when his own father died and then the Thais invaded. That may have been when they took the Emerald Buddha. I guess I am not going to be an expert on Lao history any time soon.

We were dropped back off at the hotel around 4:30 pm. The Australian couple invited me to go out with them to find someplace to eat and walk around. When they came to the lobby there was a bit of drama because their safe wasn't working 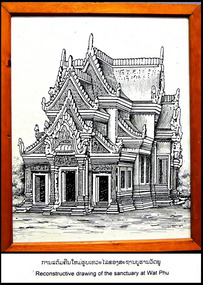 Lao National Museum - Vientiane Lao PDR
description
. The reception boys in great hilarity managed to bring the box down and break it open so the couple could get their valuables. We headed off to the night market which had mostly local goods and didn't appear that interesting. We walked across the road to get a glimpse of the sunset on the Mekong. The road oddly enough was not being driven on so lots of people were out - jogging, biking, walking, talking, listening to music. We walked down to the Chao Anouyong Statue now lit up since it was dark and then we headed back to look for some dinner. We ended up at Happy Hanoi or something like that. I had Vietnamese pancake and lemon juice (without ice this time) and a small Lao beer. There was more food that I could finish so I offered Pip and her husband some. The bill came to something over 100 kip and we split it but I think they paid more than their share. I had been really fading but perked up a little so that I managed to walk back to the hotel with them without a problem.

After returning, I managed to organize a little since all my Lumix battieries were dead or low and my phone needed charging too. My eyes were closing as I uploaded my photos. I was tucked away before 10 pm I do believe. 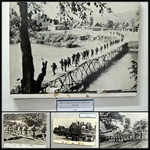