-
Get-a-Way Day
After a bump, a scrape and two uh-oh's, with the heroic efforts of Cindy and Jeff, our limo driver ( compliments of our fab travel agency Island Travel), we got to Savannah Airport in record time 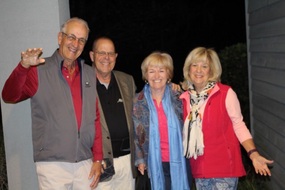 Leaving home
. Security was not happy with Don's new hip, but once that was squared away, we were off for a quick hop to Charlotte. Mile and a half walk later, on to Miami. We must say, First Class is bloody ( Mary ) good!
Arrived at beautiful Baltimore hotel around 12:30. Lunch then napped til "World Cruise Gala". At the outdoor cocktail party we managed to meet our cruise directors, the Captain, the COE of Regent ( he can't be 40) and other cruise dignitaries. With 300 attending, we also managed to find Mike Simon's cousin, the two couples we had met at Palmetto Bluff, and Rose and Paul from Bobby Sue's church. Bobby was also a pro at working the crowd, introducing us to numerous interesting fellow travelers, many of whom are on their 2nd, 3rd, up to 7th World Cruise! Who are these people?? I guess we'll find out. Cocktails followed by fab dinner and entertainment. Then dancing ...but we opted for sleep.

Embankment day.
Checked-in for ship was at hotel, which was a great idea on paper, but didn't work out so great for anyone who showed up a minute late 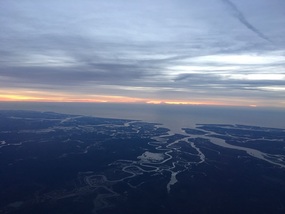 Low country from above
. We, of course were early, so no prob. Then off to huge mimosa Brunch, before busses took us to the ship a little after noon. Had beers/rum&coke on fan tail, with lunch. We wore our World Cruise tees that Bobby Sue had made us and they turned out to be quite memorable and quite the conversation piece! Got in our rooms around 2:30, but no luggage, so we were forced to sit on balcony and drink champagne. Got some luggage just in time for safety drill. Then off to sail away Party, with champagne, then elegant dinner at Prime 7, followed by Chocolate martinis on fan tail. Dori fell asleep on the balcony, while George unpacked. BS and Don opted for sleeping too. So to summarize embankment day....mimosas, champagne, beer, Rum, champagne, more champagne, white wine, red wine, chocolate martinis.

Day 1 -At Sea
This is "get organized day" , trying to get totally unpacked, cabin organized, internet setup, etc. Did go to fascinating lecture on the exploration of Pluto. Amazingly engaging speaker . Fish extravaganza lunch, with, yes, a few beers. We went to another lecture in the afternoon on the Naturalists of Panama, which we walked out of in favor of a V&T. At 6:00 the gong sounded, starting the Regent signature Block Party, where we met the captain, GM, Cruise Director and our neighbors. We had dinner at Compass Rose, followed by fabulous show, "ABBA review", by a very talented mom, dad, son and one other gal. Off to the fan tail for a nightcap before bed.
Other Entries
-

Just came across this great sojourn of yours... what a great trip! Hope all is well... enjoy it all! ---Paulie (Paulie@FroggieTheGremlin.org)