-
Day 5 Panama Canal, cont.
One of the things I love about the Panama Canal Crossing is how fascinated everyone is with it

Bridge of the Americas
. All of the staff, on duty and off, are standing on their rails ( actually with a better view than ours) watching. We got thru the last locks about 5:00, then under the Bridge of the Americas into the Pacific. Last night Dori had developed a bad cough, so went to the doctor after we got thru the Canal, to be diagnosed with an upper respiratory infection, and put on antibiotics. The only reason I mention this is, that, much to to disparity of Judge Judy, you may be reading a lot of "hearsay" for the next few days. G, BS&D went to a Caribbean dinner under the stars on the pool deck, which was apparently great, followed by first show by Regent performers; a Broadway review, which was also apparently fabulous.

Day 6 Golfito Costa Rica
Went to second lecture by our new friend the SI Music Curator . This one was on Ella Fitzgerald, and just as good as the last one. Nary a droopy eye amongst our boys! Arrived Golfito at 1:00PM. We all went on the tour, a 1 hour, very primitively boat ride to a private botanical garden in a boat that held 9 and seemed to be handmade out of corrugated iron 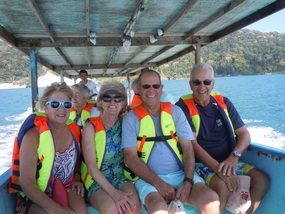 Day 7 Puntarenas Costa Rica
Off on a7 hour tour at 7:45AM. Really great tour, with super tour guides, but the highlight was that Cindy, Roberto and Sunny were able to meet us and join us on most of the tour. First we stopped on a bridge with a view to humongous crocodiles. Next on to Carara National Park, where we met up with Cindy and family. We went on an 1 1/2 hour nature tour, walking thru the Park. Then to Pura Vida Gardens for lunch. After lunch, we had to say "Pura Vida" to the kids.
On the ride to and fro, the tour guides gave us a great understanding of the Costa Rican history and culture. One story was of an indigenous people's legend about the vulture bringing knowledge to the people

At Botanical Garden
. What was so fascinating to me was how closely this resembled the Tlingit people's legend that we learned on our Alaska cruise, of the raven bringing knowledge to the people. Another point of interest is that Costa Rica has been designated by the United Nations, the "Happiest Country" in the world 3 times in the last 6 years. Had a brief shopping stop on the way back to the ship, where we had cocktails on the fan tail, as we sailed away. Had a dinner so leisurely that Dori fell asleep in her soup, so went to bed, while others persevered on through the 2 1/2 hour meal. They then went on to show "World Beat" by Navigator production cast. Dance and songs from around the world; from Irish jig to Indonesian bamboo stick dancing. Reviews are " it was good...very lively, active cast" " 12 member cast, all outrageously talented".
Other Entries
-