-
Day 11 Acapulco. Mostly Sunny 84.
Coincidentally, we both spent our honeymoons in Acapulco, at the same resort, Las Brisas 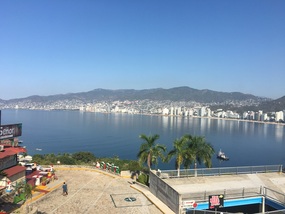 Acapulco skyline
. Earnhardts in 1967 and Barnes an 1984. What are the odds? Neither of us have been here since, so we were really looking forward to our tour of the area. Good grief, a lot has changed, but it's mostly the skyline which is now, one end of the bay to the other, high rise hotels and condominiums. Our tour started with a stop for a command performance by the cliff divers. Most of the tours from our ship started here. Seven divers put on a fabulous show for us, one dive being three of them together. The diving was followed by traditional music and dancing on the patio of the restaurant where we were for viewing the diving. Our tour then took us through Old Town, New Town, the Las Brisas neighborhood, where we saw our honeymoon resort, to the "diamond" district where the Marques and Princess hotels are located. We had several "scenic view" stops along the way. We then returned to old town for a shopping stop. Dori and Bobby Sue did both come away with a semi-precious trinket, an appropriate memento for our honeymoons of years ago 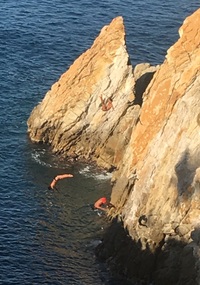 Triple dive
. Back at the ship, after a Blue Margarita lunch, we attended a Regent Seven Seas Society special event, a Mexican Fiesta, complete with margaritas and an authentic Mariachi band and dancers. The party ended with both BS & Don on stage dancing with the performers! Subsequently, everywhere on board, BS keeps getting stopped and asked for her autograph. It's kind of embarrassing! (Just kidding! ) They transformed the Italian restaurant into a Mexican Cantina, so we had dinner there al fresco. It was a beautiful evening under the stars.

Day 12 At Sea. Mostly Cloudy. 77
Yesterday, departing Acapulco, about 25 miles out we ran into a huge school of fish, thousands of them, covering acres of sea, that frolicked and followed us for at least an hour. They looked and acted like dolphins, but were smaller. We have come to learn they are Spinner Dolphins.
Today began with Dori going to a Stretch and Tone class. Everyone then went to an excellent lecture "Leo the Lion" about the founding and history of MGM studios. D and BS then went to a seminar on the latest in skincare technologies, followed by all going to a team game " taboo", which is sort of like charades. OK, and that's all before lunch! After BBQ lunch by the pool, we went to another SI Music Guy lecture, this one on Frank Sinatra. My Way got to me... you gals know what I mean...and boys are still amazing us with their attention span! Had a relaxing few hours in our rooms of leisurely "dressing"

Dive
. Off to dinner and another fabulous show " Yellow Brick Road" put on by our on board talented and energetic cast.

Day 13 Cabo San Lucas. 71, partly cloudy, somewhat cool.
We are tendered today. We didn't have an organized tour planned in the morning, so George napped, BS and Don walked around town, while Dori splurged and spent the wonderfully generous gift our Progressive Dinner Pals had given us. Thank you all so much! While in port, they run some very good spa specials so I had an 80 min. ""Heaven and Earth" massage, which concentrated on feet and scalp, not missing anything in between. The Brand new Regent ship Explorer came into the bay at noon, and, really, it was our idea, they ran a tender between the two ships, so visitors from either ship could go tour the other. We were greeted onboard the Explorer with champagne, and met up with Mike and Sandy Thompson from Moss Creek, who were cruising on the Explorer. We only had an hour onboard, so Mike and Sandy gave us a whirlwind tour. The ship is absolutely magnificent ! We got back just in time for a gala "sail away" party. It actually was a tribute, or a salute of another nature ( a nautical moon?) to the Explorer. They made a huge banner saying " World Cruise" and hung it off the side of our ship. We had music playing on the decks and cocktails flowing as we raised anchor. Then, much to our amazement, instead of leaving the harbor directly, we did a complete circle around the Explorer, everyone waving and horns a blazing! What a kick! BS and Don are eating at Prime 7 with Paul and Rose, while D & G are eating in.
Other Entries
-