-
Day 14. At Sea. Mostly cloudy 66 cool and breezy.
The boys seem to have established a morning routine 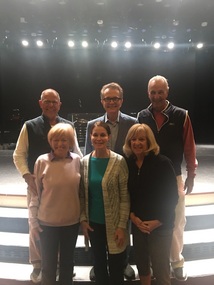 Smithsonian Inst. Music guy
..coffee and a bun at Coffee Connection early, bring the gals back a cappuccino , then off to eggs and the fixin's outside at La Veranda. D and BS may or may not join them at breakfast. Usually not. Today they did their routine while Dori went to Stretching and Abs. Then all off to lecture by Hollywood guy on the making of the Wizard of Oz. Fascinating! We went to Jamie, the Cruise Director's noontime game. Today it was "Cruise Feud" . We won! Too cold for lunch outside at our usual table, so ate inside. Then off to the last SI Music Guys lecture. It was about the rush to Hollywood by the great songwriters of the 30's, 40's 50'. His lecture ended with a clip of Judy Garland singing "Over the Rainbow". A nice tie up of both his and the Hollywood guy's talks. We have really enjoyed the SI Music guy ( John Hasse) and his new bride, Sonja. The crew put on their good-bye show, "Krew Kapers" , this evening. It was so good and touching. These waiters, stewards, bar tenders, engineers, etc. are really talented. This show was the best one we've seen on any of our prior cruises. Because of the show running til 7:00, with all of the staff in it, we decided to avoid the rush and eat in.

Day 15 Friday, Jan 20. 57, windy, cool, cloudy with showers.
Overnight, 18' seas! Viva la Dramamine! We began the day watching the President's Inauguration on the big screen. We rode a big wave into beautiful ( not so much today) San Diego around noon, on a pretty angry sea 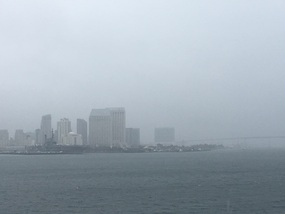 San Diego skyline in fog
. I'm not sure San Diego has ever seen the likes of today. They get 6-9" of rain a year...we got at least 4" today, with a 40mph wind. We would have called it a n'or easter. I guess it's a n'or wester here! Crazy stuff..immigration. We came from US and are continuing on. But everyone today had to have a face-to-face inspection by the immigration authorities before we could leave the ship, and tomorrow we all have to get off the ship and go through customs, without our luggage. Every single person on the ship must do this before anyone is allowed back on. We did have a Highlights of San Diego tour scheduled today. We drove around town, with the tour guide saying " ..and on your right, which you can't see because of the rain and fog.." We got to Old Town, where we were supposed to have 1 1/2 hours to have a drink and shop, but everything was closed, cause, well..it was pouring. So we didn't do that. We were supposed to then go on to La Jolla, but the smart tour guide said.."this is ridiculous, I can't give you guys a tour 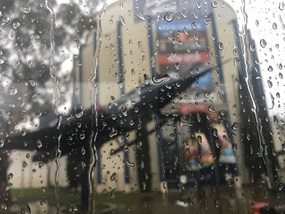 View on San Diego Tour
. Who wants to bail and go back to the ship?" It was unanimous! So we had our Margaritas in Galileo's lounge instead of in Old Town and La Jolla. Who cares? We're flexible! D and BS warmed up with bubble baths, ( picture not included, but there is one!) then dinner, followed by...what's a girl to do when it's cold and rainy..drink Brandy Alexander's!! ( We learned that in Alaska). Movie night on the big screen....Hacksaw Ridge.


Day 16 San Diego, drizzly and cool am, 60 partly cloudy pm.
Beautiful San Diego got a little more beautiful today, with clear skies and sun in the afternoon. First good news was immigration lifted the requirement of everyone vacating the ship this morning. We spent the morning off-ship in the drizzle touring the USS Midway, an aircraft carrier, turned into museum in the San Diego harbor. Very interesting tour, particularly for George who was involved in the design of several of the aircraft on board. Then, as the sun came out, back to the ship, to our table by the pool ( bar) for lunch. We spent most of the afternoon taking advantage of being on US soil, talking to our families and friends. We are not exactly homesick yet, but sure do miss our good buddies! It was great to hear familiar voices! There has been a Princess ship berthed next to us these past two days, twice the size of us. Rumor has it it was supposed to go to Hawaii, but weather too bad so it took haven here. But...here we go...we're off......to Hawaii!!
Other Entries
-