-
A note on the Blog: several have asked about commenting. I disabled comments because so many are following us and commenting is kind of like a " reply all". But, we'd love to hear from you, so just email Bobby Sue and Dori directly. We want to stay connected..we miss you guys! 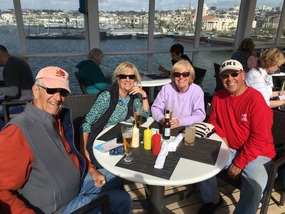 San Diego Harbot
. At Sea. Windy, wild and rainy.
Last night we ate at Prime 7. We started dinner while just departing San Diego harbor, so we had a lovely first course. Well, coming out of the harbor and hitting the open Pacific was like hitting a brick wall. Seas 18-20'. By the time we got our entrees...well, hard to imagine how those wine glasses stayed on the table. Today the angry seas continue. ( Lovin' that Dramamine!) Many regularly scheduled activities have been postponed. Went to 1st of many lectures on Hawaii, this one being on the geographical, geological and flora and fauna diversity of the islands. Then on to Jamie's noontime team game ( we won, again), then lunch in Compass Rose. CR is on deck 5 and the waves and swells were coming over the windows! Watched a sappy movie, "My name is Doris". Got into Prime 7 again tonight, because apparently many guests have not yet discovered the joy of Dramamine. Made it to the show, a one man show by one of the on-board cast/singers. It was ok. 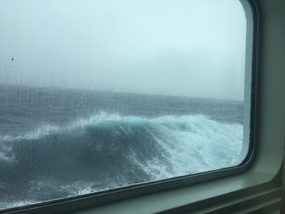 Wave
. 65, Partly sunny. Even higher seas.
According to the Captain's noontime update, seas now at 22-25'!! But they are supposed to subside starting at midnight, and get better and better every day. We attended 2nd lecture on Hawaii. This one on how the Polynesians got there. Fascinating! Then Jamie's lunch time game, which we won..again. Embarrassing, 'cause obviously we've been watching way too much Family Feud. Speaking of embarrassing, BS got asked for her autograph again today. Special Filipino lunch ( we ate salad and burgers). Then off to a movie "Miracles from Heaven" which Dori skipped 'cause she read the book and knew it would be a tearjerker. Had dinner in CR with Wyndam and Nancy, from Windmill Harbor, then on to the show, an illusionist, who was quite good.

Day 19 At Sea, same as above .
Seas may be down a bit, but we are still rocking and rollin'! Usual day at Sea. Lecture on Hawaii's traditional society, followed by Jamie's game, lunch, then on to excellent lecture on using smart phones for photography 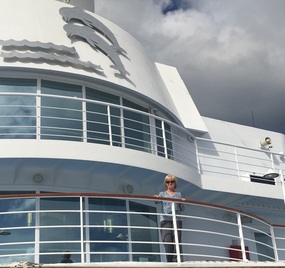 Sunshine at last
. This guy is really good and will be giving 12-15 more lectures on using our iPhones and tablets! So we actually are using our brains, just a little. We attended the Captains Welcome Reception, which had been postponed due to weather. Apparently the Captain pretty much hasn't left the bridge for the past three days.
We were invited to dinner with the Chief Engineer ( I guess we don't quite rank Captains Table). Anyway, it was just the 4 of us and him, so we really got to talk to him about his duties and adventures at Sea. Very interesting and enjoyable. We all skipped the show.

Day 20 At Sea. Weather very gradually improving. Warmer, less windy, seas down to 10-12'
Finally, finally we are able to sit outside and enjoy the ocean air! D &BS walked 2 miles, while the guys sat by the pool. Lecture re: Hawaiian Mythology. Jamie's noontime game ( won, again). Our team is us and two gals ( Cathy and Barbara) who are longtime friends, and both have been on several world cruises! One gal has over 400 days on Regent! Fab Mediterranean lunch. Captain announced we will arrive in Hawaii about 5 hours late because we diverted off course 250 miles to have better weather. So we diverted to 25' seas..what would the direct course have brought us?? Lecture on iPhone/iPad. The umbrella travel agency we use, Virtuoso, held a cocktail party for their clients on board. Fun, but no Virtuoso host, as the ship was oversold so the hosts got kicked off! Dinner at CR with Paul and Rose, then off to magician/illusionist show. He needed " the happiest couple" on stage to participate. Of course the crowd chanted "George, George, George", so there we were...now they will be asking for our autographs!
Other Entries
-