Kauai, Hawaii and at Sea 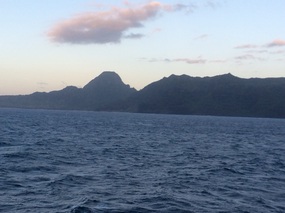 Kauai, touch and go!
. later, went out on our balcony to take another, and the island was gone! Turns out the inlet to the harbor is very narrow, and a front came through with high winds and it was too dangerous for us to enter..so we did a 180, and are heading back to our last Hawaiian port, Hilo, on the Big Island. We won't get there til tomorrow morning, so Jamie is busy planning us another full, fun filled day at Sea. We started with the last lecture by the Hawaiian guy, on the challenges, environmental social and cultural, Hawaii faces today. Very eye opening. This guy may not be the best speaker, but his material has been fascinating and he is definitely passionate about Hawaii. We did the Jamie lunchtime game. We won again, but today, I guess because he knew people might be disappointed about Kauai, it was a game where almost everyone won! We had lunch with tropical drinks, then a quiet afternoon of napping, reading, sunbathing....We went to a special Cocktail Time show put on by the resident pianist. She did a medley of songs celebrating female singers from the '50ies- now 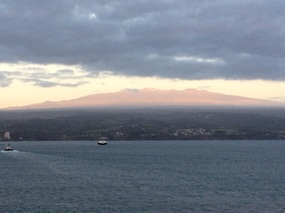 Big Island at sunrise
. She did a great job of sounding like everyone from Janice Joplin to Celine Dion! Another evening of transforming the Italian restaurant into something else. Tonight it was an Hawaiian Luau, and it was delicious! The 9:30 show was a male singer doing medleys from the great males singers like Tony Bennet, Frank Sinatra, Neil Diamond. He was really good too. Kind of a counterpart to the Cocktail show. Can't complain about an unexpected day at Sea!

Day 25 Hilo, Hawaii. 75 sunny.
We arrived in Hilo earlier than originally planned, due to skipping Kauai, which was great, cause the tours went earlier. Our tour was to Volcano National Park. It's about a 45 min drive to the park. In the park, first we stopped at the "lava tubes" where we went on an about 1 mile walk into a cave made from a lava flow. Then on to a stop where we got to walk on a lava field, and finally to an overlook ( complete with gift shop) of the currently live cauldron. We were really fortunate that the weather in the park was spectacular, crystal clear skies and, at an elevation of 4,000', cool, but not cold 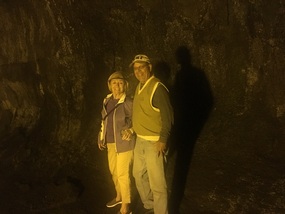 In lava Tube
. Our final stop on the return trip was to a macadamia nut farm. The operation wasn't that impressive, but the gift shop, or at least the variety of macadamia nuts for purchase, was! Our tour guide today was soft-spoken, but very interesting particularly because he is 100% Hawaiian, which is special, because less that 1% of the population is 100% Hawaiian. Back at the ship for lunch, our usual table by the pool was available. It's seeming like the guys are liking the proximity to the ice cream almost more than the proximity of the bar. We celebrated Tom Finn's birthday (eve), as we sailed out of Hilo harbor at dusk, with martinis on the fantail, followed by dinner in Prime7. We've worn our lei's that we got in Honolulu for 4 nights now. They have stayed fresh in the mini-bar. The show was a comedian/juggler, and it was the first one that it wasn't worth staying up past Moss Creek midnight for.

Day 27 At Sea, 75 and cloudy with 12-15' seas.
What happened to Day 26? Well I've numbered them wrong from Day 1, which was embankment day, that I didn't count it! Ola, our favorite breakfast waitress, is now ordering the home made V-8 for us as soon as she sees us walk into the restaurant! Ok, back to the usual day at Sea routine. Morning lecture, this one by a new, very good British female, was on The life and adventures of Captain Cook. On to a three-beer lunch by the pool. Three guesses who ordered the third beer for everyone. Nope, you're wrong! The second lecture of the day was intro to digital photography. After three beers, not too sure how much any of us got out of it. Jamie organized a "Down Home" cocktail party, where the ship was divided up into 15-20 areas and you were assigned to an area depending on your home state. We have 13 from So. Carolina onboard. Of note, there are 99 from Florida and 35 from California. We dined in CR with Rose and Paul, then off to the show, a singer/comedian. This one was worth staying up for!
Other Entries
- 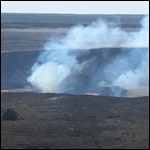