-
Day 31 Nuku Hiva, Marquesas Islands, French Polynesia. 85 degrees, sunny.
We had breakfast on the fantail, watching the incredible scenery while sailing into the bay at Nuku Hiva 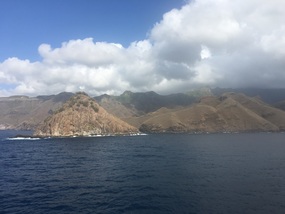 Nuke Hiva
. It is everything one imagines a South Pacific Island looks like..just breathtakingly beautiful. It is quite underdeveloped here, so our tour was in a caravan of perhaps 15 4 wheel drive vehicles, owned and driven by non-English speaking natives, 4 of us passengers in each vehicle. We toured for over 4 hours, going from one side of the island over a pass at perhaps 4,000', to the other, stopping at several places, from a church, to a beach, and several scenic overlooks. There was an English speaking guide on the tour that gathered the group at each stop and explained what we were seeing and the history of the island. For all that it was "rustic", it was authentic, comprehensive and just plain spectacular! We stayed in town for a little shopping and a local beer. Then back to the ship for a beer, and favorite personal activities. We had dinner in CR with Tina (22) and Cloe (20) two of the dancers. The are just so happy, positive and full of life! Then off to the show, male singer/comedian, which was pretty good. D&G then went to penny slots, while BS & D turned in 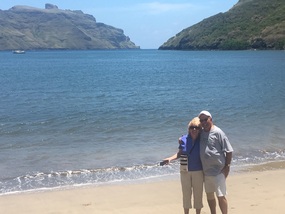 Beach at Nuku Hiva
. All in all, one of our favorite days, so far.


Day 32. At Sea , 85, sunny, seas 6-8'. Super Bowl Sunday.
We had a champagne breakfast on the fantail, then attended Jamie's non-denominational service. He is amazing. He's a Rabbi on Friday evenings and a minister on Sunday mornings. Don't know about the Rabbi part, but he's a pretty darn good minister! His service today was about the beauty of God, inspired by the beauty of French Polynesia, the places we've been and are going. Speaking of beauty, i wish I could capture the color of the water..it's the most beautiful deep blue. After the morning lecture on the real story of the mutiny on the Bounty, the rest of the day pretty much was focused on the Super Bowl. We had a huge tailgate party in the lounge by the theatre, complete with chili, pizza, soft pretzels, popcorn and everything else superbowlish. The game was broadcast on the big screen in the theatre. Only problem was it was a European feed, so no American commercials! So, really, seriously, what is the point?? We watched the first half in the theatre then Don and George watched the second half in our rooms, while D &BS did FPA ( favorite personal activities) 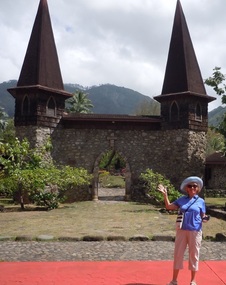 Church Nuku Hiva
. I had my condolences email typed and ready to send to Tom and Russ, with two minutes to go....and, as they say, the rest is history!! Whoopie!! We had burgers in our rooms, then off to a fabulous show, by the on-board cast " "World Beat". We will be seeing each of their shows several times over, but they are entertaining enough to want to see again!

Day 33 Rangiroa, French Polynesia, 85, sun and clouds
Rangiroa is very different from Huku Niva, because it is an atoll, not a volcano formed island. It is the third largest atoll in the world, at ~15 miles in length and Heidi could hit her driver from one side to the other. Still, it is quite beautiful, with crystal clear waters varying from turquoise to deep azure, and every shade in between. We went on two tours today. Our first was to a pearl farm, where we learned about and saw first hand how black pearls are cultured and farmed. It was fascinating. They, of course, have a boutique where one can buy these beautiful pearls, but, they were just too expensive..the necklace I liked had a single pearl and was $280..or to put that in perspective, two Regent manicures! We had lunch back on the boat, then went on a glass-bottom boat tour. The boat just held 10 and our guide was great. He moored the boat over a reef, jumped overboard and baited so that the fish swarmed around under us. Somehow he also played the ukulele and sang while driving the boat back to shore. After a tropical drink, on to FPA. Our noontime game friends Cathy and Barbara, who have been sailing with Regent forever, and can do anything they want..arranged a special private Italian sampling dinner for us tonight at the Italian restaurant, with our own special menu of 5 different pasta samplings. It was just so special. After antipasto, salad and five pasta samples, none of us could waddle to the show. The good news is that on the tender today, a woman told us she had heard from two other ladies who had been on world cruises before, that as soon as you get home and back to your normal routine, the weight just melts off!! We are going with that!
Just a note: too spectacular to not include more pictures.
Other Entries
-