At Sea and American Samoa

-
Day 37. At Sea. 84, partly cloudy, seas 8-10'
Last night we intended to go to a cocktail show put on by our singers, but ended up just having cocktails at home 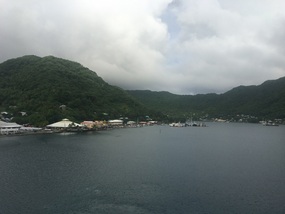 Harbor
. At dinner in CR we were asked to sit with a single gentleman, which we did..never again! Turns out he's our next door neighbor, on his eleventh world cruise, and didn't appreciate our balcony music! The show was hysterical..a pickpocket, who stole everything from watches, ties, belts, glasses and even the shirt off one guy's back. Today, it's the At Sea routine. AM lecture on the race to be the first at the South Pole. Riveting...really! The relevance to our cruise is that the expeditions mostly started from the south tip of New Zealand. Noontime game. Lunch was a delicious Indian buffet. PM lecture was on using the iCloud. Tip..check out Google Photos for storing and managing photos and videos. Dinner at Prime 7, then off to the show, a Japanese cowboy with harmonica and guitar, singing country and rock and roll. His English, when speaking, was pretty broken, but you'd never know that when he sang.

Day 38 Pago Pago, American Samoa. Partly cloudy, 86.
This is the first place we have arrived where "conservative dress" is recommended 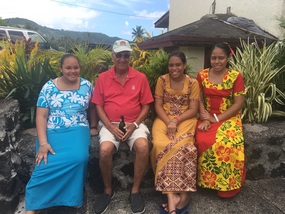 19thhole
. This means no short-shorts and no sleeveless. We sailed in around 8:00am. It is quite nice....only problem is nothing is going to compare to Bora Bora! But, it really is beautiful scenery. We had a really good 1/2 day tour in an open-air bus. It was kind of a scenic overview of the island, stopping at many photo ops, including a tsunami monument to the 100 who died in a tsunami in 2001. Another highlight of the tour was a stop at the local golf course, where we had enough time to play the 19th hole. The final stop was at a local village, where local refreshments were served, and there was a demonstration of how the local food is prepared and cooked. Here, as in most of the Polynesian islands, only the men do the cooking. The Samoans are the friendliest people we have encountered so far. Every place our caravan of buses went, people smiled and waved. After we got back to the ship, we went on a very cool tour of the ship's bridge. The Captain conducted the tour and gave us an in depth look at the technologies they use. We were not allowed to take pictures 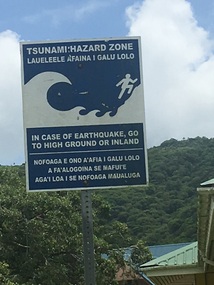 Warning
...too bad, as the bridge is quite fascinating and expansive, as are the Captains and First Officers quarters, which are located on the 11th floor, just behind the bridge. We went to a cocktail lecture by the aforementioned pickpocket. This was really fascinating, about how he works with European law enforcement to infiltrate the rings that are stealing, and in particular, those that are doing so in support of ISIS. We stopped at a cocktail lounge on our was to dinner, for BS to have her first martini, and were spontaneously joined by Tyler and Sophie, two of the onboard entertainers. Again, they are so full of positive energy and life. So refreshing and fun! Dinner at CR, followed by a female singer show, followed by a "crossing the international dateline" party. The party was dancing and several crazy team games, including one called "quest", sort of a scavenger hunt. It was a hoot and we didn't get to bed til god knows when, or on what day!

Day 39. "Poof" it's gone. Kind of like what happened to Kauai, we blinked and it didn't exist! But let me use this non-existent day to make a few observations. First, there are a few new "guests" on board. Not sure when they appeared, but it was recently. Younger, bigger guys who roam around in groups of two or three, trying to look like guests. Tom knows what I'm talking about! Next, a comment on the general ambiance of the ship now. It's like family. The staff from the Doctor to the lecturers, officers, cast, waiters, bus-boys....know everyone, greet everyone with a high-five, hug or kiss. And most of the guests are like that too. They have formed their cliques and habits..when and where they go for breakfast, lunch, cocktails, or to just plain hang out. Even on the tours, we run into the same group of people. It's an interesting social microcosm!

Day 40 At Sea. Rainy, 80, seas 16-18'.
It's sort of Sunday/Monday. It's really Monday, but we missed Sunday, so we had Sunday champagne breakfast and Sunday non-denominational service. Then two lectures in a row, first on the Lusitania, by our really good English lecturer, ( I don't want to contemplate the relevance to our cruise!) , the second by a new lecturer on an overview of the history of New Zealand. Also good. Then Jamie noontime game ( oops, we won again) , lunch, and on to lecture on using social media. We have a cocktail party for our fellow Virtuoso guests, planning on pizza in the room, then Yellow Brick Road show by our cast.
Other Entries
-