-
Day 44 At Sea. 79, partly cloudy, seas 7-8', no waves, all swells.
Breakfast in CR for a change, then the lecture "extraordinary travelers", on the migration of the peoples of the earth, in particular the Polynesians 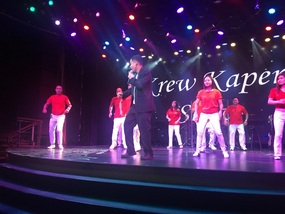 Knew Kapers
. We had Cathy and BS back, so came in the money at Jamie's game. As of noon, we have come 750 miles south from Fiji. It is noticeably cooler and less humid. Very pleasant! We had the last tech/photo lecture today. It was on photo editing, using photos guests had submitted to him as examples. Tonight, the best show of the cruise, "Krew Kapers" put on by volunteer staff members. Our favorite V-8 waitress, Ola, is one of the stars of the show. It's a tearjerker..these kids are so good and hard working, loving and sincere. We had dinner on the fantail at Sette Mari, watching the sunset, then off to the 9:30 show put on by an Aussie version of Michael Buble. It was..well, an Aussie version of MB...

Day 45 Bay of Islands, New Zealand. 78, partly cloudy.
We sailed in to Bay of Islands on calm seas early in the morning, and anchored. BS had an early morning nail appoint, complements of our fabulous Progressive dinner friends ( Thank you, Thank you... it was just $131!!!). From the the charming resort village of Paihai, we went on a pretty much all day long land tour of the area

Elvis
. We probably covered 50 miles, over 5 hours with three significant stops. The first was at the Puketi Kauri National Forest, where we went on a self-guided walk through the magnificent 1,000 year old Kauri trees. They are not quite as large as Giant Sequoias, but darn close! Next we went to a charming town, Kawakawa, where we had free time for lunch. There were several bakeries, coffee shops and ice cream shops and one tavern. No need to elaborate on that! There were also very unique public restrooms. Finally we went to a glow worm cave and, with guides, explored the cave. It was a unique and fun experience. In addition to enjoying the stops, we really enjoyed the drive through the countryside, from the bay to the high country, through vineyards, orchards, dairy and sheep farms. It was very beautiful, pastoral scenery, that really gave us a wonderful feeling for this part of New Zealand. We met Barbara and Cathy/Richard for martinis to say good-bye to Barbara, who is disembarking in Aukland tomorrow ( boo!!). Then off to CR for dinner. There is a slim (ha!) chance the feeding frenzy is over, as we all had soup and salad for dinner.
Other Entries
-