-
Day 46 Auckland , NZ. 75, partly sunny.
OMG, what a shock to wake up and look out and see traffic lights and skyscrapers! We are docked smack, dab downtown Auckland 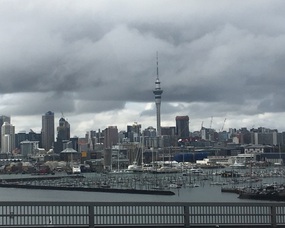 Aukland
. As it is an embarkment day, we wore our world cruise shirts BS had made us, (nice and clean and ironed, compliments of the free onboard laundry service). We were on tour today from 9:15-4:00. The tour, called "The West Shore and Devonport" took us on an extensive tour of the city, from the inner harbor, across the bridge to beaches, suburban villages, thru neighborhoods, scenic overlooks, up old volcanos ( North Head and Mt. Victoria) now parks, ending in Devonport. There we ( surprise!) had a beer, before taking the ferry back to the pier. Back in Aukland, BS and D went for FPA time while D and G went ( window) shopping on Queens Street, a version of Charlestons King Street, except, way higher end ( Gucci, Dior,etc). We all proclaimed Aukland to be, arguably, the most beautiful city we have ever seen. We were pretty spent after being on the go all day, so had cocktails on our balconies and room service pizza for dinner. 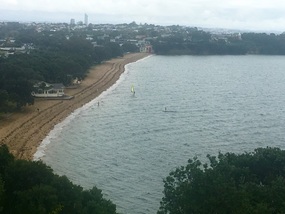 Beach from North Head
. Our tour today was "Maori Cultural Highlights" it took us first to a real Maori village where we went thru a traditional welcome ceremony and then had time with the locals to hear about their life today, as well as about their heritage and legends. After tea there, we were transported to the local high school, where students, who are competing in a national competition, put on a demonstration for us of Maori dancing and singing. The first warrior who came out to " greet??" us, scared the daylights out of George, the tough Marine! We got to participate in the dancing as well. It was quite interesting and very entertaining. After a scenic stop at the top of a mountain, we toured the seaside village, thru neighborhoods, the beach, shops, etc. The look and feel of the beachside neighborhoods was very modern, clean, expensive and new, but I think we all liked the traditional look of the older neighborhoods in Auckland better. We skipped the Captains cocktail party, to have an earlier dinner, as we were to be passing White Island, an active volcano, at 8:00 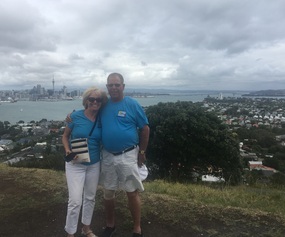 Aukland from Mt. Victoria
. Well, that was a dud, as were the penny slots until showtime at 9:30. The performer tonight was the guy we previously factiously referred to as an Aussie version of MB...guess what his show was titled tonight..." From Michael Buble to Broadway". Pretty perceptive, for a couple of "Mud-Wenchs"...

Day 48 Napier, NZ. 72, ( but it felt much warmer in the sun) cloudless, blue, blue sky.
We arrived at 10:00am, in Napier, to the oddest port. The port is located directly beneath a breathtaking high cliff, so the scenery is "Cliff/Shipping Containers". It is going to be difficult to describe our tour today, called "Cape Kidnappers and Gannet Safari", but here goes. We boarded Safari vehicles, which are 20 passenger vans with 4- wheel drive and special tires. ( Cape Kidnappers is so named because when Captain Cook first landed there, with two Tahitian he brought along as translators , the Maori, saw the Tahitians and thought they were local people Cook had kidnapped, so they tried to kidnap them back, and did successfully kidnap one 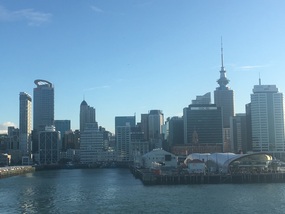 Departing Aukland
.) We drove 15 miles along the beautiful coast, before turning inland up a dry river bed. Once we turned inland, we were on private property, "The Farm at Cape Kidnappers" this property last changed hands in the early 2000's, when a New York hedge fund manager ( Julian Robertson) bought it. It is 5200 acres, if it were flat, what with the terrain, probably covers 15,000 acres. We proceeded about 2 miles before reaching hills and steep valley walls. We drove on, higher and higher, probably reaching an elevation of 500 -1000 feet. Now we were driving over gorges, up and down hills and on ridges, with sheer drop off on both sides. After about 5 miles, we reached an area that this hedge fund guy has turned into a world class resort. It is built into the hills, so not out of place. He also put in, of all things, a golf course, ( Cape Kidnappers Golf Course), that apparently is ranked 16th in the world. Mind you, the easiest way to reach it is by helicopter, and indeed there is a helicopter pad there! So, here in the middle of spectacular terrain, inhabited by thousands on sheep and cattle, is a 6 star resort and golf course 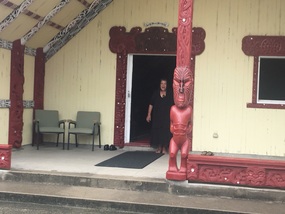 Maori Meeting House
. But, that wasn't what we came to see. The hedge fund guy had paved the road up to the golf course, but immediately past it the road turned to rutted gravel. We still have 5 miles to go, and have to stop half way down steep slopes to let the goats go! The road turned back to the shoreline, but now we are on cliffs, 1000' up! It was spectacular! We did have a photo op stop, before our final ascent to the end of the peninsula, Cape Kidnappers. There are 4 nesting colonies of gannets on the peninsula. Our trek ended at the top of the bluff, at one colony. There were some 15,000 birds here. It was just amazing, and we had 360 degree scenery; 270 of the Pacific and 90 back to the beautiful, pristine, terrain we had just crossed. We got to spend maybe 30 minutes admiring the scenery and these fabulous birds. After our time with the birds, we had to go back the same way we came, so more travel through rugged terrain. Our tour guide, who drove the van, was a local woman, probably 60-65. She has spent most of her life hiking and riding her horse on the "farm", so, in addition to her kind humor and positive energy, she was very knowledgeable about every inch of the land. We had a brief stop for "tea" on the way back, then just a quick ride through the town of Napier, which is very charming and noted for its Art Deco architecture. This might have been our favorite tour so far; either this or the Fiji Longboat River cruise. Enough already...I'm out of superlatives! We had our travel agency, Virtuoso Cocktail party, then had diner with Wyndham and Nancy, and went to comedians show...all good.