-
Day 49 Wellington, NZ. 70 partly cloudy and breezy ( basically a really pretty day!)
We arrived around 9:00 am and docking was an interesting process 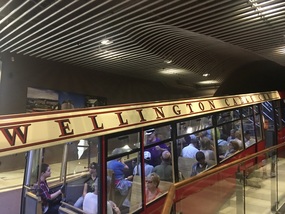 Wellington Cable Car
. Wellington is reportedly the world's windiest city, so, we assume because of the wind, as we docked we were tethered to two hard working tugboats on our windward side, apparently keeping us from getting blown into the dock! It was a beautiful day, sunny and breezy, not really windy. Out tour was "Wellington City Sights" and included 4 stops. After seeing downtown highlights, we got off and toured a charming old wooden Anglican cathedral. Next we took a ride up on the Wellington cable car, for photo ops. Then on to a lovely botanical garden, with an extensive rose garden. Finally we drove up Mt. Victoria, where we climbed 72 ( who's counting?) steps for a 360 degree view of the harbor, city and surroundings. We then had the option of returning to the ship or staying downtown for shopping, etc. D&G opted to stay downtown, but after 45 mins without stumbling upon a pub, returned to the ship. Come time to leave port, we were heading south, so our starboard side rooms not only were on the leeward side of the ship, but also facing the setting sun 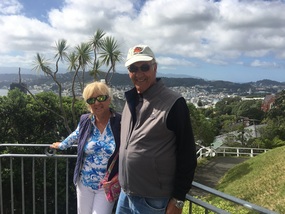 From top of Cable Car
. So, how could we resisting, but to have cocktails on our balconies, basking in the sun, and watching the sunset. So, at that point, not wanting to get dressed, etc, we had salads and pasta room service. Pasta, sunset, wine...does it get any better??

Day 50!!! Akaroa, NZ cool (60) calm and cloudy AM, partly cloudy warmer (68) and breezier PM.
We are at about the latitude of Maine, and it's very much like Maine the end of August. We arrived, and tendered at dawn into the beautiful, totally protected harbor at Akoroa; permanent pop. 650, summer pop. up to 7,000. It is a very small, charming village with maybe 15 pubs and 15 gift shops..that's it. Our morning tour was a Nature Harbor Cruise . It was a bit chilly, probably 60, but totally calm. The tour guide kept exclaiming, "what a beautiful day.. it's never this calm". It was a really nice tour and we saw the worlds smallest and rarest dolphins, the worlds smallest penguins and the worlds rarest penguins! We also saw seals, oyster catchers, 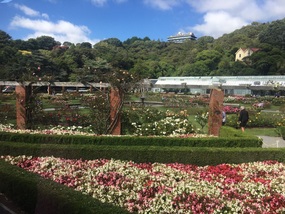 Botanic Garden
...all in all a great experience. We had two tours today, so when we got back from the harbor cruise, had 1 1/2 hour til the next tour. Not worth going back to the ship, so, as I mentioned...15 pubs in town.....( no, we didn't hit all 15!) Our afternoon tour was called "Traditional Akoroa Farm Experience" and took us up over alt. 2,000' hills, along ridges with spectacular views back to the ocean, to a 3,000 acre sheep farm. ( Just an aside, the local paper's headline was about a bus of tourists from a Carinival Cruise that fell off the mountain here yesterday) So, at the farm, the owner/farmer first told us the whole history of his family, from his criminal great-great-great grandfather in Italy escaping and coming to New Zealand in the 1800's. He is a 3rd generation farmer, with 2 generations alive behind him. It was so interesting. Then, after we all got to hug the sheep, his daughter-in-law sheered a sheep! We then went outside and she and he showed us how the dogs herd the sheep. It was amazing ! They gave one command and one dog ran probably 500 yds 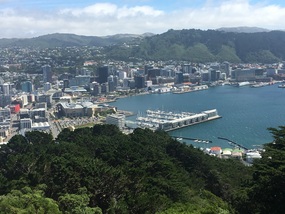 Wellington from Mt. Victoria
. downhill, then 1000 yds uphill, in about 30 seconds..no kidding... and gathered a herd of sheep!! Another dog joined him to encourage the sheep to cross a creek. After the demonstrations, we were served tea and crumpets at their farmhouse. What entrepreneurs this family is. They are also really hard working and genuine people. We loved this tour!. Back in town, we did a little shopping. Then back to the ship for a New Zealand Dinner on the pool deck. Wow..fab day..so after an Irish coffee on the fantail, skipped the show..which from the description, we are calling a Ms. Aussie Michael Bubele!

Day 51. Dunedin, NZ. Sunny, calm, 68.
We docked at dawn in Dunedin. It is a spectacular day -bright sunshine, gentle breeze. Our tour today, called "Natures Wonders Wildlife Safari" took us to the headland of the harbor for wildlife viewing. We rode by bus about 1 hour along the shore of the peninsula that forms the southern side of the harbor. We rode by villages, by pretty bays, to a farm at the headland

Sunset
. There we boarded an "Argo", an 8 wheel drive, sort of open jeep, holding 6 passengers and a driver. Again, like Disneyworld, except for real, we traveled over incredibly rough terrain, up hills, to an altitude of ~ 1000', then quickly back down to sea level. This is an eco-farm, a sheep/cattle farm, but dedicated to preserving the indigenous flora and fauna. We stopped at a seal colony and saw lots of pups, as well as a gigantic Elephant Seal. He weighed 1500 metric pounds ( whatever that is..SIRI doesn't talk to us here). Next we went to a penguin colony and saw nesting penguins, the smallest variety, I believe they are called "blues", really close. We re boarded our Arco for an exciting ride back up to the tour base. That part was really exciting, informative and fun, as was our bus ride back to town. Instead of the coastal route we took the "high" road. At the start of the route was a sign " curvy, narrow road, next 7 km, not recommended for large vehicles" . And it was. Mind you, we were in a 40 passenger bus, and of course there was the Carnival incident in our past port..but no worries...off we go, up 1000', over ridges with straight drops to the sea..beautiful scenery and quite the adventure. We did make it back to the city, amazingly, where we had a brief tour of the downtown before returning to the ship. No time for shopping today, as the ship sails at 4:00. On the way out of the harbor, at the ocean side of the headland of the peninsula, we got an excellent view of 300 nesting albatross'.
Other Entries
-