-
Day 52. Cruising Fiords of Milford Sound. Foggy, drizzle, 55 degrees.
Last night we had dinner in Prime 7, then off to an ok show by a magician/illusionist/entertainer 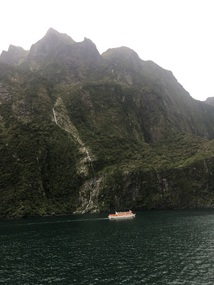 Waterfall in Milford Sound
. Today we awoke to a bleak, dreary day. We had a leisurely breakfast in CR. As we are sort of "at Sea" we had a lecture on the convicts and the colonization of Australia, by the terrific Brit lecturer, followed by Jamie's game (cashed!). At this point it was 1:00 and we were entering Milford Sound, so instead of lunch, we went to the "room at the top", Galileo's Lounge and had Bloody Mary's and potato chips while watching as we enter into these majestic fiords. Fortunately, just about then the drizzle stopped, the fog and clouds lifted some, and although the sun didn't come out, at least the visibility improved enough for us to really see and enjoy the scenery. I'm sure this is really magnificent in the brilliant sunshine ( which is apparently rare here), however the low clouds gave it an ethereal quality, which was quite beautiful. We cruised at maybe 2 knots until 5:30, circling around waterfalls. By then, after scones and tea, the clouds and fog descended again and drizzle returned. But, we saw it! We had to wait a bit at the bottom of the sound, to pick up 14 passengers who had taken an overnight land trip, and re-embarked from a tender in the sound. Now on to, as the captain just described "The Exciting Tasman Sea". If it's exciting for him, can hardly wait to see what it is for us!! As we exited the Sound, we were greeted by a beautiful rainbow. Maybe that's what he meant?? Hoping..... Had dinner with our across the hall neighbors, and all retired; no show 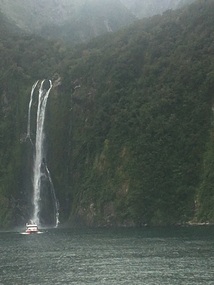 Day 53. At Sea in the Tasman Sea. 64 degrees, mostly cloudy, seas at 10-12', all in swells.
It's Sunday. Jamie opened the service today with a prayer that started " We thank you, our Lord, for this calm day on this tumultuous sea.." Anyway this morning 8:00 champagne breakfast; 9:00 service; 10:00 lecture on history of Australia; 11:00 lecture on Taj Mahal (some passengers will be going there on an overnight side trip); 12:00 Jamie game ( won again). It was nice enough for lunch outside by the pool, before an afternoon of much missed and appreciated Personal Favorite Activities!! We had dinner upstairs in the Italian restaurant, transformed to a New Zealand Restaurant ( very good) , then on to an ok show by Ms. Aussie Michael Buble. She had a great voice, by didn't sing stuff that was " sing along".

Day 54. Crossing the Tasmanian Sea. 70, partly cloudy, seas 10-12'
Nice day! The "exciting" and "tumultuous " Tasmanian Sea has, thankfully, turned out to be a pussycat for us! It's Monday, but, Sunday at home, Oscar day, and we have a live feed (11:30am our time). We started the day with a leisurely breakfast in CR followed by quality time at our favorite poolside table watching the sea go by. So pleasant, that we skipped the lecture. Our next door neighbor, not the grumpy guy, but single gal, Theresa, on the other side, had us and our across the hall neighbors, for a red carpet champagne and h'or d'overs party from 11:30-12:30 untill the show started 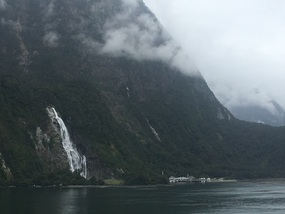 And a few more
. Very nice of her! We actually didn't care about the show, so after the champagne and red carpet, went back to our favorite table for lunch and margaritas. (BTW, Blond Brigade, it's been 8 weeks, and don't tell Joanne, but we haven't done our hair yet! We were going to today, but..we are both so bleached out, can't really tell..so maybe soon... We did catch the end of the Oscars..4:15pm here, not 12:15am! So got to see the SNAFU live!! We were invited by Virtuoso, to a Galley tour at 4:30. Done it before, but always interesting. We had dinner in CR, then went to show. It was a singing/dancing Cabaret put on by two of our production cast members, PJ (age 18) and Nadia (21). Glad we went, ' cause they were terrific and would have been disappointed if we hadn't been there.

Day 55 Sydney Australia. 78. Sun, clouds and an occasional passing shower.
We sailed in at dawn and passed the Opera House and went under the Harbor Bridge at around 6:30am, but most passengers, including us were up, and on the top deck, as we didn't want to miss it! We weren't disappointed! Out tour today was at 10:30, which was great timing, as the "passing showers" included one immediately before we left, then clear sky's, until a shower shortly after we got back

Rainbow so close could touch it!
. The tour was a 5 hour extensive tour of the city downtown, including a guided tour of the opera house, and a trip, through suburban neighborhoods, to Bondi Beach. The city, although very expensive, is beautiful. Many, many modern, all glass high-rises. The Opera House is, of course, magnificent. It was also fascinating hearing the history of the building, from choosing the architectural design, the engineering feats, and of course the stupendous schedule and cost overruns. We were also lucky in that the symphony was rehearsing so we got to spend about 10 mins. listening to them play, and hear the perfect acoustics of the symphony hall. We were impressed with how many young people there seem to be out and about town and on the beach on a Tuesday afternoon! Back on the ship, we had a snack and a beer by the pool , before sail away at 6:00. We eat in at BS &D's house, and skipped the show, while we watched an in- room movie... Mrs. Florence Whomever. DB liked it..others napped!
Other Entries
-