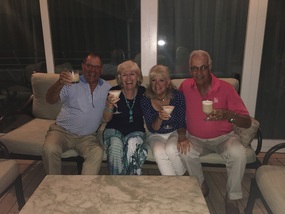 Happy Birthday Liz Ann!
. We all made it to the first, but the guys graciously agreed not to go to the second in order to secure our favorite poolside table. By the 3:00pm third lecture -and, then there was one- the others opting for FPA time. They missed a pretty amusing one, on the similarities and differences between Australian and American language, habits and culture, culminating with the observation that the biggest difference between Australians and Americans is Vegemite! Seriously. Ask Susan. If it weren't for her, I wouldn't have known what he was talking about. Another interesting stat..there are 5 times as many slot machines in Australia as in America, with Australia having 1/10th the population! Do the math! We ate an early dinner in CR, then went to the fantail to toast to Liz Ann. Happy Birthday Liz Ann!!

Day 57. Brisbane, Australia. 84, partly cloudy.
What a surprise Brisbane is! We just think of Sydney and Melbourne as being big Australian cities...well Brisbane is way up there as being a cosmopolitan Mecca 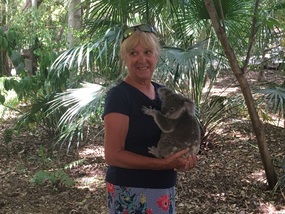 Dori and Kuddly Koala
. Our tour took us first on an extensive viewing of the downtown area. Like Sydney' s botanical gardens ( and like Boston Commons/Gardens and NYC Central Park) there is a wonderful downtown botanical garden, but most impressive was the floor to ceiling glass high rises, one 82 stories. Many of these are new residential buildings. There is an interesting juxtaposition of the colonial original buildings, with the new. And cranes, cranes everywhere. This is the fastest growing city in Australia. Also, I mentioned about the slot machines..Brisbane is in the process of tearing down several blocks, right snap dab in the middle of the city, to put in a multi-billion dollar casino. Apparently gambling is a favorite pastime of the Aussies. The second part of the tour was to Lone Pine, a Koala sanctuary. It was more like a gigantic petting zoo, and so cool to be up close and personal to these animals that are so foreign to us. In addition to bats, birds, snakes and lizards, we were in an area with free roaming kangaroos and emus 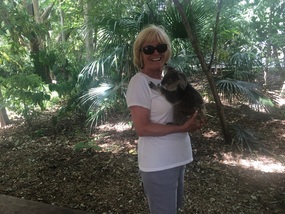 Bobby Sue and Kute Koala
. Saw Platypus, Tasmania Devils, Dingos. But the best was the Koalas. We saw several in trees, but for a nominal extra charge, we got to hold a koala..they are actually kind of heavy, for their size, but, so, so, cuddly and adorable. We did have to wait a bit to hold our koala , because he/she had the hiccups!! Poor thing was new to the cuddling game and apparently a bit nervous. We had about 1 1/2 hours at the sanctuary, before returning to the ship. But wait..one could be dropped downtown, close to the Queen Street Mall, if one chose, and Dori and Bobby did so choose! This mall is huge, 1/3 mile long and half as wide, three stories high. It is downtown, open air, with blocks closed off for pedestrian traffic only, with, they say, over 700 retail stores. Thursday afternoon, and it was packed with mostly young people. Where do these young people get the money for these $1M 1 bedroom apartments?? We didn't really do much for the Australian economy, but it was fun to see and explore for a few hours, before taking a shuttle back to the ship 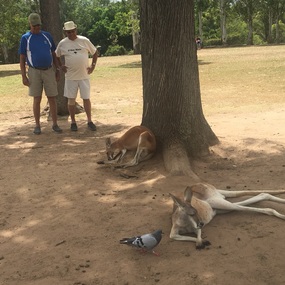 Four Kangaroos
. The little we did do, buy a boomerang, got confiscated by the ship, not to be returned til Miami, cause they must expect we would soon be boomeranging each other to death. We sailed out just as darkness fell, with a magnificent show of heat lightning, lighting up the Brisbane skyline. We went to a later dinner in CR, but got out in time for the show. The show, the threepeat of Yellow Brick Road, by our production cast was poorly attended. We felt sorry for the kids, cause they are so enthusiastic and want to entertain us. Glad we went.

Day 58. At Sea. 89, seas 3-5 feet.
We continue to be in awe of everything we do, see and experience on this adventure, however it seems that the 6,7, 11th time world cruisers find stuff to complain about. Perhaps thats why the ship confiscated the boomerangs ! Anyway, today we had, again, three lectures. The first was on the cultural World Heritage sites of Australia. The second was by a surprise lecturer, that is, he was a surprise for our cruise director 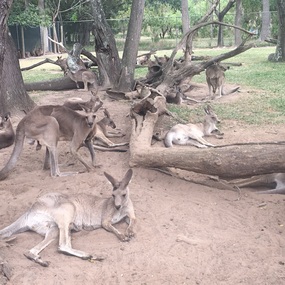 Lots of Roos
. Turns out that our Reef Pilot, who came on in Brisbane, is in charge of the Cruise Ship Reef Pilots ( so gets to pick which ships he schedules himself on), and by law, will be on our ship for the one week that we are traveling in and amongst the reefs that make up the Great Barrier Reef. He has been a Reef Pilot for 30 years, and while onboard, offered to do three lectures on being a pilot and the reef. Jamie jumped on that offer! And it also turns out, he is a fascinating and amusing speaker. Today he talked about the job of being a Reef Pilot. Of note, he mentioned that when he started 30 years ago, the mission of a Reef Pilot was to protect the ship from the Reef. Today, the mission is to protect the Reef from the ship! I know we were all excited about seeing the Great Barrier Reef, but now we are really psyched. After noontime Jamie game ( DB and DE won), we had a poolside lunch, followed by the third lecture, about sports in Australia. We attended the Seven Seas Society Party, which celebrates loyal Regent travelers. There are 71 out of 490 guests who have sailed with Regent more than 400 days!! Dinner at Prime 7, followed by the best transient entertainers to date-Aussies, called "TheTapPack". Four guys singing Pack Rat songs and doing amazing tap dancing. Fabulous!!
Other Entries
- 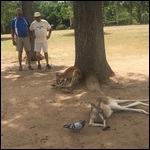 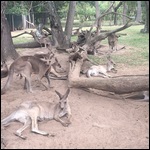