At Sea, Cairns and Cooktown

-
Day 59 At Sea, inside Great Barrier Reef, 82, rain/drizzle am, cloudy pm.
Schedule update: due to issues with docking in Myanmar, we will now be skipping it altogether and have the following schedule changes 3/18-3/25:
3/18 Port Klang, Malaysia
3/19 Penang, Malaysia
3/20 Phuket, Thailand
3/21 Phuket, Thailand
3/22 At Sea
3/23 At Sea
3/24 Colombo, Sri Lanka
3/25 Colombo, Sri Lanka
Frankly, we are delighted with the new schedule, although there are some on board that 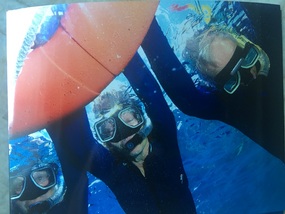 Snorklers
...well, now we know for sure why they confiscated those boomerangs!
Today we are passing through Islands, between the mainland and the Reef, with the Reef 25-30 miles toward sea. The gap between land and Reef will become much smaller tonight, such that after we leave Cairns tomorrow we should be able to see the Reef from the ship. We passed through a beautiful area, Whitsunday Straight, this morning. This is a very popular tourist area, and includes 72 islands, most uninhabited, but also some 6-8 world-class resorts. It was cloudy and raining as we traversed this area, so didn't get to really enjoy the apparent beauty. Three lectures today. We skipped the morning lecture and sat on the fantail watching the sea and rain. Noontime game..we cashed..lunch..nap..on to the next lecture, about the founding of the Smithsonian Institute. ( Relevance is that most of the lecturers are associated with the Smithsonian). The third lecture was by the Reef Pilot on the health of the Reef. And, his opinion is that the media are hyping whatever they can 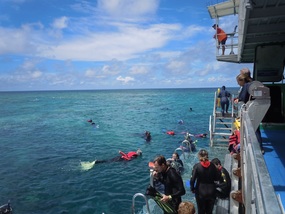 Snorkeling off the Platform
. The Reef is alive and well...has been for 5 Million years, and will be for another 5 million. Yes, it is evolving, but no, it is not dying! Good news!! We were invited to have dinner with the GM, just the four of us, and he was delightful, a wine enthusiast, who served us from his private wine stash. We went to a one-man show, a Texan, who was a piano player/singer/comedian and pretty good.

Day 60. Cairns, 88. Rain, clouds, sun.
Now, this is THE get-away to the Great Barrier Reef, so we were really bummed to wake up to rain. Our tour was a pretty much an all day tour to the Reef. We departed from Cairns at 8:30 in the rain on a catamaran, holding, perhaps 200, going 1 1/2 hours offshore to a platform over a portion of the Reef. When we got there, it was cloudy, and our first activity was taking a tour on a semi-submersible of the Reef in this area. That was pretty amazing. Next, the sun came out, and stayed out, and we all donned light-weight wet-suits to go on a guided, by a Marine Biologist, beginners snorkel tour 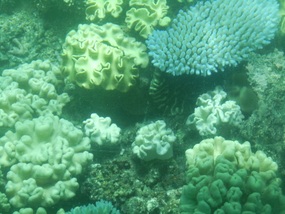 Coral
. The reason for the wet-suits was that the water temperature was 88, a happy temp for jellyfish ( we didn't see any). DB was pretty panicked about snorkeling, but determined..thus, the guided beginners tour. However, it was super-fabulous. After the guided tour, now pros, DB and BS went back out three times snorkeling on their own. They didn't want to ever get out of that water!! It turned out to be a beautiful day. We were on the platform for 5 hours, also going on a glass-bottom boat tour, before returning to shore. The whole experience was awesome, beyond description. Back "home", we had an Australian dinner on the pool deck and as we were all pretty exhausted from our day, we crashed!

Day 61. Cooktown, 90, partly cloudy.
Cooktown is, rightfully, described by the locals as a "one horse town". Pop. 2,000, it's claim to fame is that after Capt. Cook ran aground on the Reef, he came to this spot and spent 48 days here, repairing his ship. Cooktown gets 6 Cruise ships scheduled here a year, and usually 3 never make it, cause it's too rough and windy 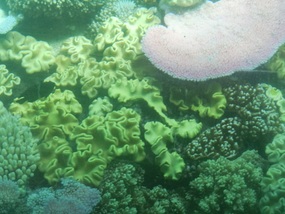 More coral
. We, fortunately, had a beautiful calm day ( although we heard there is a cyclone currently in Darwin, our next port). It's so "one horse town" that they have to bring in busses and tour guides from Cairns, 4 hours away, to service us tourists! We had 2 (one horse) tours today. First was to a botanical garden, that pretty much didn't have anything to see, followed by a trip up Grassy Hill, for a magnificent 360 degree view, then on to a very nice museum, that even housed the anchor from Cook's ship! We had an hour to kill in town before the next tour. So..no trouble figuring out where to go... a nice, new pub..RMS, Retired Military Service club. The next tour was to Black Mountain, an interesting geological area, then on to Lion's Den Pub, a unique almost outback, watering hole. Barnes had Earnhardt's over for dinner, which was a bit of a foo-pah, as somehow the order got lost, then, in an attempt to make us pizza quickly, we think they used tomorrows sticky buns dough for the crust! D & G went on to the show, while BS & D retired.
Other Entries
-