-
Day 62. At Sea. 86 Rain, clouds, sun. Seas 0 feet!
Today we are passing through Torres Strait, the Prince of Wales Channel, and then out of the Reef 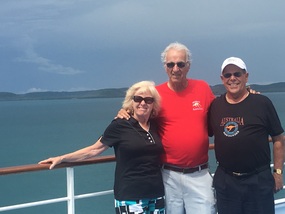 In Torres Strait
. This is a particularly narrow and dangerous passage. So, we are at Sea, but instead of our normal "At Sea" routine, we skipped the two morning lectures and even skipped the poolside favorite table, to spend all morning on the top decks 11-12 and on the fantail. We didn't want to miss the scenery of passing through this beautiful area of Reef, islands and specularly colored water. Although it rained early, by the time we reached the northern end of the passage the sun was out, full force! Our Reef Pilot came over the PA on 3 occasions to point out what we were passing along the way. Not wanting to miss a single sight, we lunched on Bloody Mary's on the fantail. About 1:30PM we passed by the northern tip of Australia. No more land in sight til day after tomorrow..so...the crew cleared the pool deck and put on a "country fair" . Each Department set up a game booth ( which was not Cruise Director planned, but their own original creation). We had 45 min. to play as many games as we could and each time we won, we got a raffle ticket 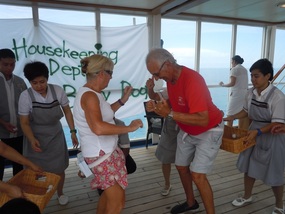 Housekeeping's game
. What a kick, and fun to be "playing" with the crew. The games were, for example: Casino crew-three rolls of the dice, if you got a pair, you won; Bar Staff-carry a filled to the brim cocktail on a tray around an obstacle course , without spilling to win; Restaurant crew-a water balloon toss at the waiters/waitresses; Production cast-a ping-pong dunk a cast member in the pool game; Housekeeping-a wiggle your behind to drop ping-pong balls out of a Kleenex box game ( G beat D!), etc, etc. At the end was a drawing of the raffle tickets for prizes. We had a blast, but did not cash, so had to treat ourselves to a Margarita to compensate. Not much time to nap, so soon off to dinner in CR, where we were seated next to the "Tap Pack". We made it to the show by Pianist/comedian. It was entertaining...

Day 63 At Sea. 86. Partly cloudy. Sea literally like glass.
Today, back to our " at Sea" routine. We went to the morning lecture ( re: Australian fossils) then on to noontime game where we came in second 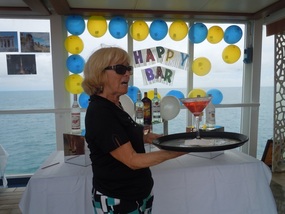 Bar waiters game
. There was a fabulous elaborate Aussie Barbie on the pool deck for lunch. ( George ate kangaroo and Don ate crocodile..and George, BS, and Don ate "bugs"..yuk!) Then, afternoon lecture on the evolution of Homo sapiens, FPA, and cocktail lecture by the Reef Pilot on the indigenous people who live around the Torres Strait. They are a very unique people, not Aboriginals, not Micronesians, but with their own genetic and cultural makeup, unlike anyone else in the world. There are only about 3,000 of these people, and our Pilot had clearly become very fond of and politically and culturally sympathetic with them. We got out of the lecture late, but managed to squeeze in a balcony cocktail before dinner in CR. Then off the the show, which wasn't a show but a dance party to Beetles songs, with our singers singing and our dancers dancing with each other and us on the stage. We did dance a few dances with our spouses, but mostly Dori and Cathy danced til they dropped. Wow, such a blast. To be 20 again, ( well...maybe not). 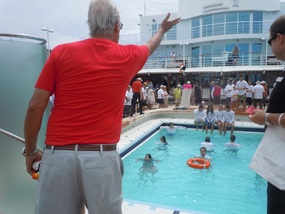 Toss game
. 88 partly cloudy, with a shower.
We are half way around the world, and half way through our 128 day journey! Hard to believe.
Our tour today was "jumping crocodile cruise". We drove about an hour through "top end" , as the natives call this area, outback, to a river, where we boarded a boat for our cruise. The boat was two tiered and held maybe 60 passengers. We were on a river that was literally teeming with these magnificent reptiles. The crocs were way bigger and meaner looking than our docile alligators. Anyway, basically the crew of this boat, who have named all of the crocs, baited the crocs to come up to the boat and jump straight up 10' or so to get the bait. Sounds hokey, but it really wasn't. It was quite fascinating, again, particularly for us SC people who are familiar with gators. We were on the river for an hour or so before returning to land and the city of Darwin. We got dropped off downtown, for a little shopping and a beer. After the beer, the gals suggested the guys might be happier back on the ship, so they returned, giving us gals some quality shopping time. Among other things, were able to find much needed oversized tops to conceal how much fun we have been having!
Other Entries
-