At Sea, Komodo and Bali 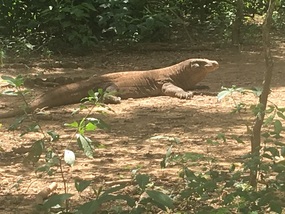 We named her Bonnie in honor of her B-day!
. After a leisurely breakfast in CR, D and BS walked a mile, while the guys enjoyed poolside time. We went to a lecture by a new, to this cruise, but we had had him on a previous cruise, lecturer, Terry Bishop. This guy is as good a story teller as we'll ever hear, so we were so glad to see him here. He will be onboard until Rome, and as he is also a troubadour/entertainer, will do some evening shows, in addition to his some 15+ planned lectures. His lecture today was on the Japanese bombing of Darwin, Australia during WWII. Even George, a WWII buff, did not know the history of the War in this region. Although this guy could make watching grass grow interesting, it was eye opening and fascinating ( even for a non-War buff!). After a poolside lunch, we all skipped the afternoon lecture while the guys rested and the gals attended a scarf tying class. After nice balcony cocktails, we had dinner with Sandra, the Cruise Consultant, in Prime 7. She was so excited we had invited her, as, although, part of her job is hosting guests for dinner, Prime 7, the Steak House is 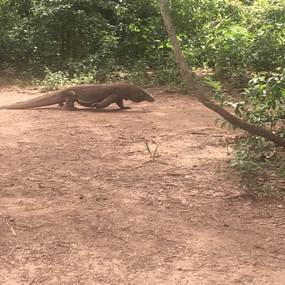 Like an Alligator?
...well..she can't ask us there..we have to invite her. She was very engaging! After dinner , to the show, by a gal Aussie singer, who could belt out a song, but until her finale West Side Story song, we didn't connect. Her next show is a tribute to Barbra Streisand, so I do believe we can connect to that!

Day 66 Komodo Island, Indonesia. 88 .
Did you know Indonesia is, first off, a country, and second, has the 5 largest world population? We sure didn't. We have now ventured into a part of the world that we know nothing about..how cool is that! But, with the help of our very fabulous lectures, we are learning. Our AM lecture today was about the colonization on the West Indies, and.. who knew.. about a colonist, James Brooke..short story... from 1800, until 1946, when the Japanese invaded and occupied Indonesia (BTW, none of us knew that either) , he and his appointed heirs managed to become the "white"shahs of the south portion of Indonesia
Anyway.. today we sailed into a spectacular area 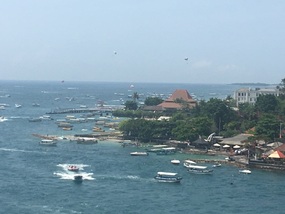 Arriving Bali
..Komodo Island. The scenery is magnificent. The claim to fame is the Komodo Dragons, a large and aggressive lizard that lives here. We went on a "trek" through the rain forest to an area where these animals congregate. They are about 10-12' long, and, honestly, everyone was in awe..but us South Carolinians..well look at the pictures..they are not all that uglier, or larger than our alligators! Maybe they are a little uglier ( sorry, Bonnie) so, we had a nice day and don't want to admit, we were not all that impressed. It was a hot and humid day, so when we got back Dori and Don jumped in the pool. We attended a cocktail lecture about Indonesia , then, after sunset cocktails on our balconies, Earnhardts had Barnes over for a great spaghetti and Meatball dinner. No show for us tonight! ( it was a Virtuoso harmonicaist...really hard to pass up!)

Day 67. At Sea AM , Bali PM. Calm sea, 88, partly cloudy. Rain, thunder, lightning later.
It's Sunday so after the Jamie non-denominational service we went for a the champagne breakfast 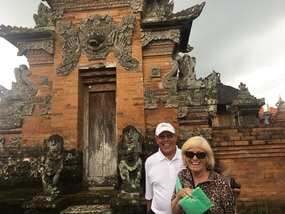 At Family compound
. We had a few more mimosas as we sailed into Bali, arriving at noon. Wow, is Bali ever fantastic. Sailing in, we could see a zillion resorts..there must have been 20 parasailers in the air, and boats of all sorts everywhere. Just beautiful! It's hard to describe Bali, because the sights and scenes are so foreign to us. First off, due to some quirk of history, Bali is 90% Hindi, whereas Indonesia on the whole is 90% Islam. There are no sleek, modern, all glass high rises, in fact, no high rises at all. Even the resorts are just a few stories tall. (Their belief is that, for religious reasons, they cannot sleep higher than the sacred Banyan tree). And, it is very densely populated..traffic, cars, scooters, scooters and more scooters. Our 6 hour tour this afternoon really gave us a great overview of the landscape, architecture and culture. We first drove about an hour to a residential area, where we toured a typical family compound. The culture is such that several generations live together in these compounds that get passed down to the youngest son 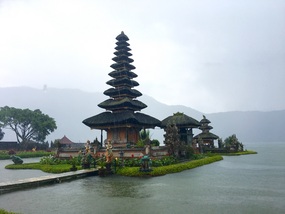 Prayer courtyard in the rain
. The compound has several buildings and three general areas; first the temple/ceremonial part, next the primary living quarters and in the back, the "messy" part, toilet, animals, food gardens, etc. Next we drove through rice fields, up a mountain to a huge Temple located on a volcanic crater lake. Almost as soon as we entered the grounds, the sky opened up with thunder and lighting and a torrential downpour. We are in the tropics in the rainy season..so not a big surprise...so much so that our tour guide just happened to have ponchos in his back pocket for everyone! Temples are not at all like churches, in that these temple was composed of three courtyards : the first to make sacrifices to ward off evil; the second " for the people" and the third for prayer. Each courtyard has many open air buildings, plus extensive manicured grounds, all three covering perhaps 2-3 acres. It was quite lovely and would have been more so, if not for the rain. Also, of interest, was that the place was like Coney Island with the people 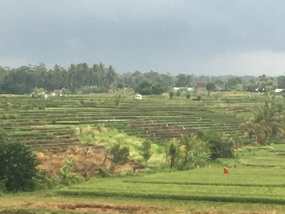 Rice terraces
. It was a Sunday, and additionally, a full moon, which is a cause for celebration here. Perhaps that was why so many people everywhere. We drove back down the mountain, going on back roads through rice terraces ( they terrace the land to control the water), and through many villages. Each village has a village temple, as well as the temples in each family compound. Very fascinating! There is virtually no crime here because of this family/village culture. Back at the ship, we had cocktails on our balconies, before an Indonesian dinner in the Italian restaurant. The show was local talent..5 young women in traditional costume, doing 4 ceremonial dances, accompanied by about 18 local musicians. It was, again, fascinating, and the sounds and vision so unique to us.

Day 68. Bali, 88, partly cloudy, no rain!!
Our tour today was again a six hour tour. These tour are so long, mostly because the traffic is like nothing we have ever seen..and two of us lived in NYC! There are 4 M people on Bali and 1 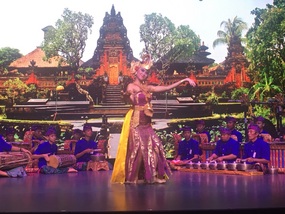 Show by locals
.3 M scooters. One tour guide claimed there are 20,000 scooter deaths a year ( seems extreme, but who knows..). Anyway today's first stop was to a Batik factory, where we had a demonstration of the hand done process, and of course the opportunity to buy some of their products. The wares were beautiful! Then, probably 10 miles and 1hour later, we toured a Temple, "the Royal Temple" , which was built in the 16th century and was privately used by the Royal Family, but is now a public temple. It covered probably 2-3 acres, again with the three courtyards. Here, the "sacrifice to ward off evil" courtyard is actually a cockfighting ring! Apparently, that they fight til one dies, counts as a sacrifice. Although we would not be allowed in the prayer courtyard, this one had a low wall, so we could walk entirely around it and see the structures. Quite beautiful, and so different than what is familiar to us. Out third and final stop was, again, maybe 15 miles and an hour away. Here we viewed the Tanah Lot temple from a distance. Tanah Lot means "middle of the sea" and the prayer section of this temple is on an island connected to the rest of the temple by a rock bridge, only accessible at low tide. Really beautiful, and certainly would be a peaceful place to commune with nature and God! We then drove 11/2hours back to the ship, but the trip was again on back roads through these interesting villages. We sailed away at 5:0
Other Entries
-