Two days at Sea and Singapore 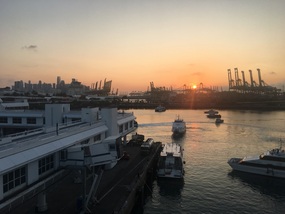 Docking at sunrise
. Interestingly, the "kids" ( production cast) were there and told us about their very different take on Bali. They didn't go on tours to see temples (and traffic) but instead took a taxi to the high-end resorts and hung out with the rich tourists ( mostly Japanese and Aussies) around the infinity pools and had $10 massages. One gal even got a mani-pedi for $7! They loved it! Not that we didn't love it too..just a different perspective! The show was the Aussie gal, doing the Barbra Streisand tribute, and it was as we were expecting, great! Today, we are doing our At Sea thing. Three lectures: first on the history, with emphasis on the multi-cultural make-up of Malaysia; second on the siege and fall of Singapore in WWII. We got a lunch break, Tex-Mex, before the third lecture. Tex-Mex lunch....what's a girl to do, except margaritas and shots! It was a beautiful day and we were about to read/nap on our balconies when, whoosh...we ran into 50 mph wind, rain, and fog. That lasted about an hour before we were back to cloudy and calm seas 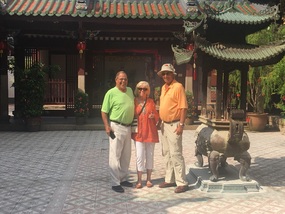 Chinese Temple
. By time for the third lecture..you got it..then there was one, again. Only our science buff made it to this lecture on the importance of the science of geology/earth studies to mankind. It was quite interesting! We split up for the evening, D &G staying home, splitting a Club sandwich and watching La La Land ( entertaining!). Meanwhile BS and D went to the Krew Kapers show... always a treat to see the crew perform. There is a probably unfounded rumor going around the ship that after the show, for dinner, BS had a martini, followed by a margarita, then a Mexican Butterfly ( the protein ??), and washed it all down with a glass of wine! You go girl!!

Day 70 At Sea. 84, partly cloudy seas 1'.
We will be crossing the equator at 5:00PM tonight and it is just a few days away from the spring equinox, so the sun is almost directly overhead..and is a beautiful day..gentle breeze, comfortable temp, not humid. Can't believe this will keep up! D had an early $145 nail appointment, while others had a fantail breakfast and poolside time 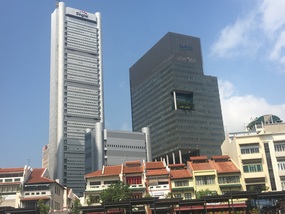 Old and new, from the river
. Our morning lecture was again on the history of Singapore, a tiny country, all by itself in the middle of Malaysia. This island nation, about the size of Manhattan, was briefly a part of Malaysia after the independence of Malaysia in the 1960's, but got kicked out three years later because.....too many Chinese! Interesting...After a fish extravaganza lunch, a little shopping and penny slots, we skipped the afternoon lecture and rested up. Jamie put on a crazy-fun crossing the equator cocktail ceremony at the pool, complete with King Neptune (Terry Bishop) and pirates and mermaids ( production cast) . In the end the "polywogs", those who have never sailed across the equator before, were sentenced to kissing the mermaid, who suddenly became a pretty ugly merman! Not as bad as the dunking sentence Dori endured! After the ceremony and cocktails, we settled in for BLT's and retired early.

Day 71. Singapore. 86, pertly cloudy.
Singapore! It's is going to be so difficult to convey the sights and scenes of this amazing city 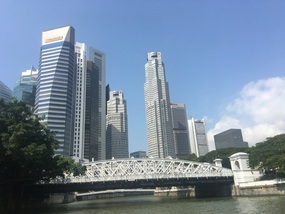 Interesting architecture from river
. ( Not that so many other places we've been haven't also been amazing..each is amazing in a different way). Here goes..We sailed in at dawn, and we were on the fantail having breakfast and watching the sun rise as we docked. There were boats of all sizes everywhere. It's hard to imagine how this big ( well, small for a cruise liner) ship navigated amongst them. The cranes on the surrounding dock were bigger than any we've ever seen, and in the not too distance, we could see skyscrapers of every shape and form. It was phenomenal seeing all of this at dawn. Leaving the ship, the cruise terminal was immense. To get out, we walked in total 3/4 mile (the Fitbit tells the tale), and had to go through immigration, where they finger printed us(!) and X-ray us, and then customs, before joining our tour guide. BTW, there is a minimum $250 fine for taking so much as 1 undeclared cigarette off ship! Our tour " Singapore's Iconic Tour", took us first to Chinatown, where we spent some time in a Chinese Temple 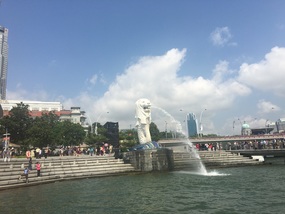 Merlion
. We then drove through the financial district, to an area of bars and nightclubs, Clark's Quay. There we boarded a small ( there were 25 of us) boat, for an about 1 hour tour of the city from the Singapore River. We saw the old section, with the ultra modern glass, skyscrapers, all with unusual architecture, in the background. We saw the iconic Merlion, the symbol of the city, and the spectacular Marina Bay Sands hotel/casino complex. It was a fabulous tour!. Next, we reboarded our bus and stopped at Arab street, for a bit of shopping and a photo op of The Mosque. We ended the tour at the famous Raffle's hotel, the home of the original Singapore Sling, where we were all treated to one of these classic cocktails. Now, at 1:00PM, we could take the bus back to the ship, or venture out on our own. George had been talking with one of our fellow, very experienced world travelers, who had told him that going to the top of the Marina Bay Sands hotel was an experience not to be missed, so, we did it. We jumped in a cab and went there 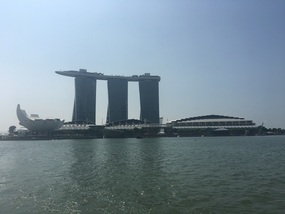 Hotel/casino complex from river
. OMG, three 57 floor towers, topped by this boatlike structure that spans all three and has restaurants and bars and the most amazing infinity pool there at the top. We went up to the top ($20pp in credit at a bar) and went to the C'est la vie ( and it sure is!) bar. Ok, so drinks were $20-24, and a small cheese platter $38, but who cared. We had a few drinks, enjoying the spectacular view. From the city, to the harbor, it was all un-friggin-believable. We went back down to see the casino. Vegas has nothing like this! First, we had to show our passports both entering and leaving, as tourists get in free, $100 entry fee for citizens! It was two story and enormous..at least an acre, maybe even two. We couldn't see from one end to the other. There were some 2 cent slots, but other than that, the cheapest blackjack table we saw was $100 min. and the place was packed, mostly with younger people. With all those people, and all the tourists in the city, we only saw one other white person. Enough of that. After loosing $2 on the 2cent slots, we retreated, and returned to the rooftop bar for one last look at the view, and yes, and one last $20 cocktail 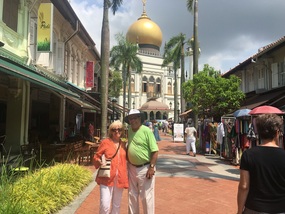 Arab St. and Mosque
. We grabbed a cab home, congratulating ourselves for having been so adventurous. Back at the cruise port, we entered into a large mall that is a part of the port. Just as we walked in we passed a hair salon. Mind you it's been 10 weeks, since we've done anything with our hair, and they could take us immediately, so the guys went back to the ship, while D &BS got their hair done. It turn out this was a Korean salon. Just how many can say they got their hair done in Singapore by a 50 year old gay Korean guy with blue hair? The highlight was the 15 min. scalp and neck massage that was a part of the rinse. When all was said and done 2 hours later, the receptionist insisted on taking pictures of us both from all angles. We assume they don't get too many blonds, particularly ones who are now glowing in the dark! Back at the ranch, we had a later dinner, then for the first time, went to the piano bar, which was very enjoyable. We were sailing at 11 PM and wanted to stay awake to see the sail away . We actually didn't leave the pier until 11:30, but miraculously, about that time, our favorite bar waiter showed up at our doors delivering a tray of our favorite midnight cocktails. That helped keep us up, and it was well worth it, as watching the lights of the city recede was just beautiful. I'm exhausted, just reliving this amazing day in writing!
Other Entries
-