-
Day 72. At Sea. 84. Partly cloudy, Sea 2-3'.
The biggest modification to our "at Sea" routine was that we all slept in, really late, as we were up pretty late last night 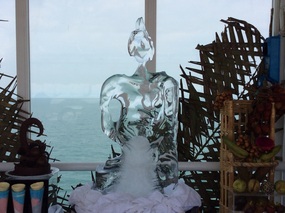 Ice sculpture at lunch
. We went to the morning lecture, by out very amusing and entertaining lecturer, on a very serious, dark and upsetting subject.. first a brief history of Siam, but focusing on Siam/Thailand's role in WWII, and in particular the "Railroad of Death". This is the "Bridge over the River Kwai" story, and apparently the movie is pretty much completely inaccurate. Even the river wasn't named Kwai, but got renamed in 1960 to comply with the movie. Anyway, he did not make light of the war atrocities that occurred in the construction of the railroad. Upsetting to hear, but glad we went. There was no Jamie game today, so after our recovery lunch of Bloody Mary's, we went to the afternoon lecture. This was by our US Diplomat lecturer, who is pretty factual, but also interesting. His lecture was a little more in depth on the political history of Siam/Thailand, up to current events. Of interest is Thailand started in WWII as a partner of Japan and managed to end up as an ally of the US. Later in the day, of interest was that we were sailing up the strait of Mallaca, the third busiest shipping route in the world behind the Panama Canal and the Suez canal 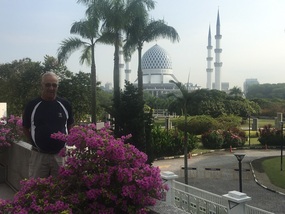 Blue temple
. Looking out our balcony, we could count at least 18 huge shipping vessels in our 180 degree view! At 6:00PM the ship wide cocktail gong rang, signaling the start of the Block Party. We all took cocktails onto the hall and socialized with our neighbors while the stewards served wine and h'or d'overs. Meanwhile, the Captain, GM and Cruise Director ran through the halls, saying hello to everyone. It's St. Pat's day so we had a great meal of Corned beef and cabbage in CR, before a brief stop at the piano bar, on our way to the show. The show was our lecturer/entertainer/troubadour doing Irish songs, sing-a-longs, and comedy. It was good Irish fun! He really is entertaining.

Day 73. Port Klang, Malaysia. 88. Partly cloudy.
This port is the gateway to Kuala Lumpur (KL), the national capital of Malaysia, and also home to the King of Malaysia. Our tour was rightfully called "Highlights of Kuala Lumpur". The 45 min. ride from the port was interesting in that our first thought was that something had gone terribly wrong and we had been beamed back to Florida

Royal palace
. We traveled on a 6 lane, divided toll rode, flanked on both sides with 2-3 story newish condos landscaped with palm trees. Sound familiar? However the city was anything but familiar. Skyscrapers and high rises and cranes, cranes, cranes, building more skyscrapers. KL is home to the tallest twin towers in the world, at 88 stories. KL is also one of the the fastest growing city in south-east Asia. Anyway we made many, many photo op stops, from the enormous Blue Mosque, to the Royal Palace, War Memorial ( we did go on a tour here), Independence square, Twin Towers, an Indian Temple, ending at a Chinese temple, where we also had time to explore on our own. It was a 6 hours round trip, but quite a whirl-wind tour. After a late lunch by the pool, FPA time. We attended a cocktail lecture by a lecturer/performer on memory! Clues on how remember names, which work, if only we could remember the clues! We watched the sunset sail-away from the fantail, and it was pretty spectacular, so much so that many of the crew and officers were out on their special deck watching 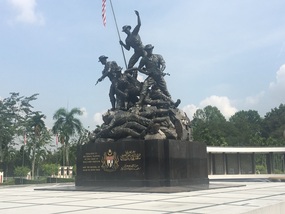 National monument
. After dinner in CR we went to the Virtuoso Violinist's performance. We need a little culture, now and then!

Day 74. Penang, Malaysia. 88 partly cloudy.
Our day started with a lecture on the history of Burma..past and current, and quite frankly, after hearing what we heard, we are glad for our itinerary change! We arrived at Penang, Malaysia at noon and went on tour at 12:45. We loved Penang..but we are realizing (after 74 days) it has a lot to do with the tour guide, who was fantastic! As he said," if you are only here one day, you are doing the two best things, but you should really come stay for five days! " Perhaps he's right. But we did do the two best things! First, after driving through the Unisco World Heritage Site of Georgetown, we went to the Funicular for a ride up Penang Hill. It was totally crazy with people, as it was apparently a holiday, and all the locals love to do this. We had tickets for the " fast lane" and the slow lane must have waited over an hour to go up the hill. The ride was great, I did a video, and at the top, the temperature was 10 degrees cooler and the view spectacular. We took a "carriage" ( it was a golf cart for six for $10) ride around the top. There was almost amusements park stuff there as well, which we really didn't have time to investigate. After returning down the funicular, we went to a magnificent Buddhist temple. We had to climb 170 steps to get to the first level ( the guys opted to have a beer instead ) then we rode a cable car up another several hundred feet to this spectacular, maybe 300'' tall image of the Goddess of Mercy. It was quite spectacular. We didn't get "home" til 6:00pm, so decided to have cocktails on the balconies and it was D&G' s turn to have BS&D for salad, pasta and ice cream, before everyone ( except the writer) crashed!
Other Entries
-