2 Days in Phuket Thailand and 2 days at sea

-
Day 75! Phuket, Thailand. Mostly cloudy, was supposed to be 95, but overcast, so 80-85, a few showers.
It's pronounced "Poo'-Ket", as opposed to the way George wants to pronounce it! Today's tour was on my top 5 of definitely want to do, so we were disappointed when they canceled the stop in Thailand, because we had to get to Burma a day earlier, due to the tides 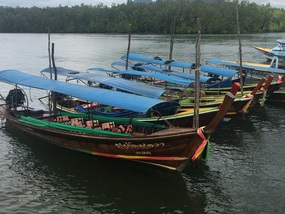 Long boats
. But, when we had to actually stay in Burma even a day later-that would have been 5 days in one port-that's what triggered the redo of the itinerary. And..we got, not one, but two days in Phuket. Definitely a bargain! Our tour today was to "Spectacular Phang Nga Bay". And it is a truly spectacular sight; a national park, consisting of 37 limestone islands. It was a 1 3/4 hour drive to the park, where we boarded long boats, holding 35 passengers. From the pier, we proceeded through these islands for maybe 45 mins., before arriving at a "floating village". This several hundred year old village is built on wooden stilts in the bay and currently is very prosperous based on the restaurant and shops by which they service the millions of tourists that come here each year. On this 1 acre floating area, that included a school, a temple and a huge restaurant, there are 650 homes for the families that permanently reside here. We had lunch and some exploring/shopping time ( we bought one size fits all fat pants ($7)..and they fit. 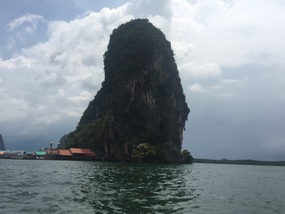 Floating village
.how depressing is that! ) before re-boarding our boat to continue our tour of the park. We were perhaps 1 1/2 hours more on the water, weaving around these magnificent islands and caves before returning to the pier. The scenery was so beautiful, ethereal and unusual. This was a bucket list tour for us before we learned that the James Bond movie "Man with the Golden Gun" was partially filmed at one of the most iconic island here. We then had a long drive home, through rush hour and lots of traffic, returning after 9 hours on tour, arriving around 7:30PM. We grabbed a quick shower and a quick room service burger, at Earnhardt's, and maybe a few glasses of wine, before retiring. We have a tour tomorrow at 8:15. If we think this is work now..we ain't seen nothin' yet!

Day 76. Phuket, Thailand. 86, partly cloudy.
Just an aside, in both lectures we heard on Siam/Thailand on our last day at Sea, we were told about how much the people of Thailand loved and revered their late King, the longest reigning monarch in the history of the world

Home in floating village
. He gained the throne when his brother, the then King, died in the 1940ies under suspicious, and unsolved circumstances. This current King just passed away in October. Apparently, this latest King was so revered, no one speaks of how he ( suspiciously..and if they are reading the blog, I will be arrested for suggesting that!) came to reign! And..yes, that's exactly what we heard from our guides...no mention of the brother, just how much they loved this king! Our tour today was multifaceted -"Scenic Phuket and Elephant Camp". We started at the Elephant Camp, where we got to feed ( for a nominal charge) a mother and baby, got photo ops with these elephants and also got to see them perform, from basketball, to soccer , hula hoops and a dance. It was very cool, being up close and personal with these obviously very intelligent beings. Elephants are worshiped here, so there was no cruelty in the show or in the training. For the past 40 years, the only new elephants in captivity, have been born in captivity. Of these, some are household pets and some are used as beasts of burden, to haul lumber from the forest, for example 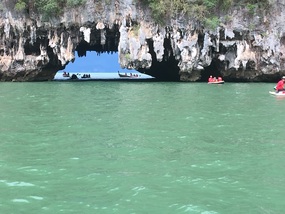 Limestone cave
. They claim to have some 2,000 elephants in captivity, and 3,000 elephants living in the wild in Thailand. Next, still at the Elephant camp, we went on an Ox-cart ride, followed by a Thai cooking demonstration. We then re-boarded our bus and rode a few miles to a holy Buddhist Temple, where we had 45 min. to tour the grounds and buildings. Thailand is 90% Buddhist. The Temple was quite beautiful. We had to take off our shoes, and have our knees and shoulders covered, also no hats, to enter the Temple. After our time here, we went to a Cashew factory, where in addition to a demonstration of going from fruit to nut, we had samples and the opportunity to buy products...probably the guy's favorite part of the tour! Next on to a Gem Emporium, which was huge, with beautiful jewelry, beautifully displayed. We restrained! Our final stop was at a rubber tree farm for a brief demo. Finally we returned to the ship, had a quick beer, then ran out to the vendors set up on the pier for one last shopping opportunity. You know, all the stuff we buy that says "made in Indonesia " or "made in Thailand" is ridiculously cheap, I mean really ridiculously cheap at the source! Kind of hard to resist! Minimum wage here is equivalent to $9 per WEEK! We sailed off at 4:00 pm, so we enjoyed cocktails on our balconies watching the sunset, and also not attending the Captains Welcome Party 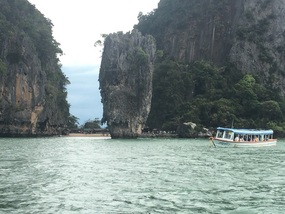 James Bnd Island
. We had dinner in CR and went to the show, " The Great American Song Factory" put on by our production cast. It seems like these kids get better and better, every time we see them perform! We love seeing them, because by now, we feel like they are our kids-well at 18-24 yrs. old, more like our grandkids!

Day 77 At Sea. 86, partly cwoudy ( as the Croatian Captain pronounces it), seas 3-5'.
Another aside..we ran into John and Sylvia, who turned us on to the Marina Bay Sands complex in Singapore -they actually got off in Singapore and stayed 4 days at the hotel, before flying to Thailand to rejoin the cruise. Anyway, we learned this hotel/casino is a part of the Sands, out of Vegas, consortium. John also told us that the casino can accommodate 80,000 people!! I didn't mistype that! 80,000!!! So, today is a quiet "at Sea" day -just one lecture, in the morning, by our troubadour/ lecturer, the first of a trilogy he will be presenting, on the colonial history of India. Interesting, with a bit of added humor, as always 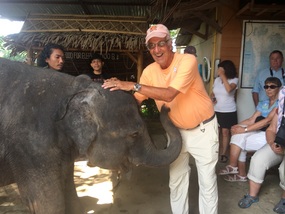 George with baby elephant
. Jamie's lunchtime game was individual, and BS won. Lunch was an international curry buffet. Yum! Then, we pretty much had the afternoon "off" so enjoyed the beautiful weather and some FPA time. We had cocktails in Stars Lounge, trying to listen to the piano player, but it was just too noisy, then dinner at Prime 7, a cocktail on the fantail, followed by the show. The show was an individual performer, Mark Preston, formerly with the Lettermen, and he was definitely Vegas quality-probably the best individual performer on our trip to date. After, we thought about going to the late night dancing/performance, but..it was just a thought.

Day 78. At Sea, in the Indian Ocean. Partly cwoudy, 86, seas 3-5'
Today we are having a very quiet day. Not that there isn't plenty to do, but we are taking it easy as we will be on pretty long tours for the next 7 days straight. After a leisurely breakfast in CR we attended the 2nd lecture of the trilogy on India. This one focused on the "mutiny" of the locals on the East India Tea Company, in the middle d 1800's. Not a pretty picture. We had decided to take a day off drinking, which was working quite well up until about 11:30AM, when the least likely suspect ordered a beer! So much for that plan! We had a Dim Sum lunch at the pool, enjoying our suddenly solicitous head waiter. D & BS then walked a mile, before everyone retreated for FPA time.
Other Entries
- 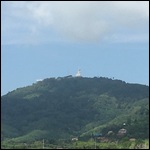