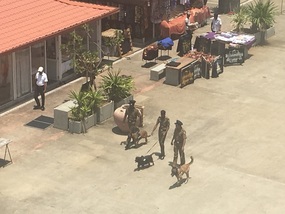 Policing the Cruise Port
. It was a beautiful evening, ~ 82 degrees, so great to be outside sipping champagne! We had dinner at Ola's station in CR, followed by piano bar, then the show -production cast singers tribute to Broadway. All good!! Today we had the third lecture of the trilogy of India, this one from mid-19th century to today. A happier story than yesterday's lecture, but still millions and millions dying over these Colonial conflicts and wars. We sailed into Colombo at noon. As we docked we watched three armed police, with sniffing dogs do an inspection of the cruise pier! Our tour today was to a Tea factory, located 35 miles from the city. It was supposed to take 1 3/4 hours to get there, then we were to be there 2 hours, with the 1 3/4 return trip well, traffic was beyond horrendous. It took us 1 hour to go the first 1mile! Then we sped up and covered the next 12 miles in another hour. We arrived after 3 hours, so the guide sort of short-cut the tour there to 1hour, and traffic was better coming home, but it still took 2 full hours 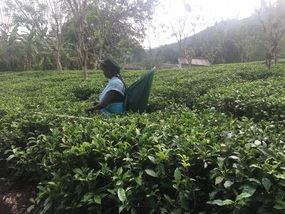 Tea picker
. Yuk, it sort of put a damper on Sri Lanka. Fortunately we had the foresight to order room service for dinner before we left, as there were 5 vans on this tour, or probably 100 people, in the same dilemma. So, we enjoyed pizza and BLT's at Barnes. But, the best part of the day was watching the show going on outside our balconies after dinner. Colombo is a huge shipping port, and the pier is reverse "L" shaped, with the cruise pier, cordoned off ( by barbed wire) at the toe of the "L". So, we were right up next to the shorter end of this 24/7 shipping complex, with perhaps 12 huge container cranes on our leg and 20 or more on the other leg. We were all spellbound watching the huge cranes going to and from the ships, precisely loading trucks, which were flying by at 1 every 8-10 seconds, and unloading and loading via another crane complex (5 wide on our leg) into and out of stacks. Thinking of the computer program that is controlling all of this is mind boggling, even for a person with process control experience! We were mesmerized! ( And needless to say, we skipped the show of local talent, with all this local scenery to see) 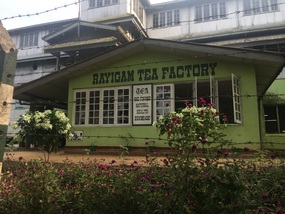 Day 80. Colombo, Sri Lanka, Partly Cloudy, 90.
Colombo is the 16th worlds largest artificial port, and they are expanding to twice the size! Our tour today was called "Colombo Contrasts" and was an extensive tour of the Downtown area. We saw lots of Colonial buildings juxtaposed with new all glass skyscrapers and cranes, cranes, cranes everywhere! Sound familiar? How this part of the world is growing. It's kind of scary. Anyway on tour, we had several photo op stops and three major stops. The first was at the National Museum, which tells the tale of the history of Sri Lanka, mostly through artifacts, some dating back thousands and thousands of years, found at archeological digs throughout the country. It was quite interesting, but the museum was not air conditioned, so it was kind of warm. Our second stop was at a 5 Star hotel, where we were served a drink and light snack at their rooftop restaurant. Quite pleasant and scenic. Our final stop was for a tour of a Buddhist temple, again quite beautiful 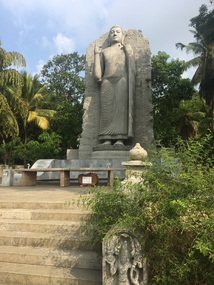 Statue, Colombo
. All in all it was a nice, interesting and informative tour and warmed us up( literally) to Sri Lanka after our fiasco of a tour yesterday. We got back to the pier in time for a quick run through the pier based shops before we set sail at 2:00 PM. (Someone mentioned to us that on some world cruises, on the last night they have a auction, where everyone auctions off all the crap they bought and can't remember why! ). We had a afternoon of FPA, and DB's was a $99 massage -a deal, today only special, down from $189! It was a beautiful evening, so we enjoyed cocktails on our balconies, watching the sunset. We had dinner in CR, with Ola as station manager, followed by a brief stop at the piano bar on our way to the show. The show was by that terrific entertainer of a few nights ago, Mark Preston, and once again, he didn't disappoint.

Day 81. Cochin, India, 98 degrees, 90% humidity, partly cloudy.
We sailed in, arriving before 9:00 AM. Everyone on the ship had to go through a face to face immigration inspection, so immigration officials boarded and set up in our theatre, and we all proceeded through. About 1/4 of the guests are getting off here, flying to the Taj Mahal for 4 days and reboarding in Mumbai, so they went first. By the time they got to us, we were delayed on our tour by 1 1/2 hours, so perhaps we were not in a good mood to start with. So now we are touring at noon in the midday heat. We did have a terrific tour guide, but the bottom line to us was that the filth, trash, raw sewage, smells and sights, sort of overpowered our ability to appreciate the history and culture. Our first stop was to an area where there were these unusual Chinese fishing nets. The locals ( no longer Chinese) have been using this method of fishing with huge nets raised and lowered by balances and counterbalances for some 700 years. A very smelly outdoor fish market was on the shore behind these fishermen's nets. There was also a Christian church, originally built in 1552 in this area, as well as several large colonial homes, now converted to hotels. Next we drove to an area with a "palace" which had beautiful Hindu frescos on the walls, which had been painted, again in the 16th century. Next to the palace was "Jew Town", as the area is labeled by the locals, with some 70 shops with aggressive owners, as well as a Jewish temple. According to our guide there are 38 Jews in India, out of a population of 1.2 Billion people. After our tour of this area we boarded a boat for a tour of the harbor. The water was teeming with such stuff that the thought of describing it ...I can't even go there! We returned to our ship around 4:00 and ( after a few beers ) ran for the shower. The good news is that this really makes us appreciate even more the beautiful place were we live and also the good fortune we have had in our lives.
Other Entries
-